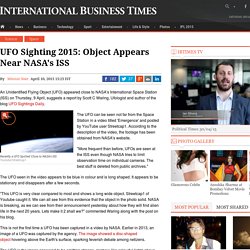 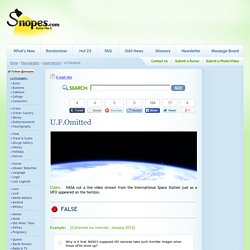 Example:[Collected via internet, January 2015] Why is it that NASA's supposed HD cameras take such horrible images when these UFOs show up? Nasa accused of cutting live ISS feed as 'UFOs' hover in sight. Alien hunter, Toby Lundh, recently spotted a 'UFO' outside the ISSBut the live stream was interrupted for 15 seconds after it appearedIn a separate incident, a grey object was seen coming over the horizon One possibility is that it was the moon, or debris left on the lens By Ellie Zolfagharifard For Dailymail.com Published: 19:44 GMT, 21 January 2015 | Updated: 13:39 GMT, 22 January 2015. 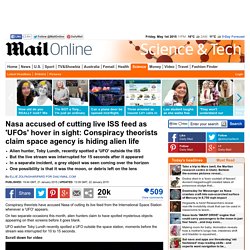 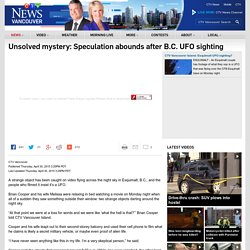 Brian Cooper and his wife Melissa were relaxing in bed watching a movie on Monday night when all of a sudden they saw something outside their window: two strange objects darting around the night sky. “At that point we were at a loss for words and we were like ‘what the hell is that?’” Brian Cooper told CTV Vancouver Island. Cooper and his wife leapt out to their second-storey balcony and used their cell phone to film what he claims is likely a secret military vehicle, or maybe even proof of alien life. “I have never seen anything like this in my life. July 8, 1947: Roswell Incident Launches UFO Controversy. 1947: Days after something shiny crashed in the New Mexico desert, the Roswell Army Air Field issues a press release that says the military has recovered the remains of a “flying disc.” 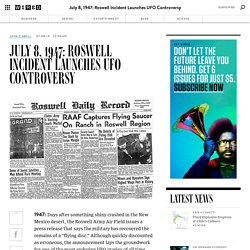 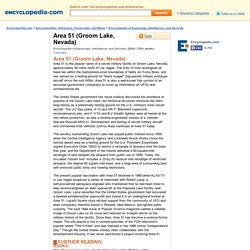 The 6-by-10 mile rectangular air base lies within the Switzerland-sized boundaries of Nellis Air Force Base, and has served as a testing ground for "black budget" (top-secret) military prototype aircraft since the mid-1950s. Area 51 is also a well-known folk symbol of an assumed government conspiracy to cover up information on UFOs and extraterrestrial life. The United States government has never publicly discussed the existence or purpose of the Groom Lake base, but historical accounts chronicle the site's long history as a preliminary testing ground for the U.S. military's most secret aircraft. The U-2 Spy plane, A-12 and SR-71 Blackbird supersonic reconnaissance jets, and F-117A and B-2 Stealth fighters were all tested at the site before production, as was a reverse-engineered version of a Vietnam War-era Russian MIG-21. 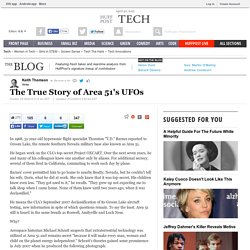 " Barnes reported to Groom Lake, the remote Southern Nevada military base also known as Area 51. He began work on the CIA's top-secret Project OXCART. Over the next seven years, he and many of his colleagues knew one another only by aliases. For additional secrecy, several of them lived in California, commuting to work each day by plane. Area 51: the plane truth. There had been rumours of weird things in the skies above Groom for years, but they reached a peak after Bob Lazar, who claimed to be a former employee of Area 51, went on television in 1989 with what he said was evidence that the US Air Force was conducting tests on flying saucers which could be observed from public land nearby. 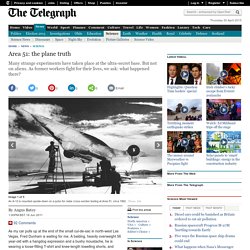 Revealed: How Area 51 Hid Secret Craft. ON TV: Area 51 Declassified premieres on the National Geographic Channel on Saturday, May 28, at 10:00 p.m. 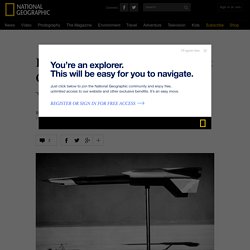 ET/PT. No word yet on alien starships, but now that many Cold War-era Area 51 documents have been declassified, veterans of the secret U.S. base are revealing some of the clever—and surprisingly low-tech—ways they hid futuristic prototypes from prying eyes. The CIA created Area 51 in 1955 to test and develop top secret U.S. military projects in the remote Nevada desert. More than 50 years later, the base still doesn't officially exist and appears on no public U.S. government maps.

Area 51 Conspiracy Theory. The granddaddy of all space conspiracy theories has to be that the moonlandings were faked on a soundstage. 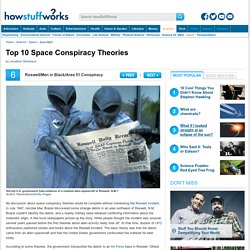 Those who believe the moon landings were hoaxes say that the United States lacked the technology necessary to transport humans to the moon and back. They claim that NASA faked the landings in order to make people believe the U.S. had fulfilled President John F. Kennedy's promise to land a man on the moon before 1970. What evidence do these skeptics cite? Area 51 vets break silence: Sorry, but no space aliens or UFOs. Newly revealed stories from people who used to work at Area 51 shed light on a site still shrouded in mystery. VANCOUVER, Wash. — After nearly five decades, guys like James Noce finally get to tell their stories about Area 51. Yes, that Area 51. The one that gets brought up when people talk about secret Air Force projects, crashed UFOs, alien bodies and, of course, conspiracies. UFOs? Aliens? Area 51 Revealed.

It's the centerpiece of virtually every modern UFO theory and a symbol for everything the government doesn't tell us. About an hour's bus ride northwest of Las Vegas, Area 51 is one of the most famous military bases in the world, in part because the government barely acknowledges its existence. According to UFO lore, Area 51, near Nevada State Route 375, otherwise known as "Extraterrestrial Highway," is where the Pentagon has, for decades, stored frozen extraterrestrials and recovered alien spacecraft.

The Road to Area 51. Area 51. It's the most famous military institution in the world that doesn't officially exist. If it did, it would be found about 100 miles outside Las Vegas in Nevada's high desert, tucked between an Air Force base and an abandoned nuclear testing ground. How Area 51 Works" For decades, a U.S. military installation located roughly 100 miles (161 kilometers) north of Las Vegas had been one of the worst-kept secrets on the planet. Area 51, as it's commonly known to UFO conspiracy theorists and aviation buffs who piece together the details of classified military spy plane prototypes, is a place whose existence the U.S. government long refused even to acknowledge. Project BLUE BOOK - Unidentified Flying Objects.

General Information The United States Air Force retired to the custody of the National Archives its records on Project BLUE BOOK relating to the investigations of unidentified flying objects. Project BLUE BOOK has been declassified and the records are available for examination in our research room. The project closed in 1969 and we have no information on sightings after that date. The National Archives has received numerous inquiries concerning documents identified as "MJ12" and "Briefing Document: Operation Majestic 12.