Alien Agenda and the Mark of the Beast. Researcher and Teacher of God's Word From Creation to the End Times. UFOs and Alien Beings. Written by Michael Gleghorn Michael Gleghorn addresses issues related to reports of UFO and alien sightings. 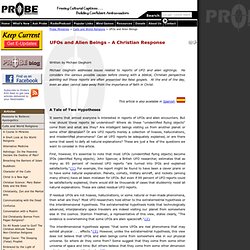 He considers the various possible causes before closing with a biblical, Christian perspective pointing out these reports are often presented like false gospels. (1/2) Atomic Anti-Christ- Occult NASA Secrets of Parsons & Oppenheimer. Lam, Aleister Crowley, Grey Aliens, Jack Parsons. Updated September 2009 The Author is not an expert on Satanism or Crowleyism, nor is a member of any such groups or affiliated with any such groups. 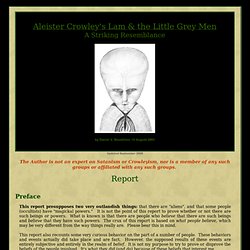 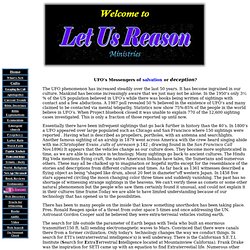 The UFO phenomenon has increased steadily over the last 50 years. It has become ingrained in our culture. Mankind has become increasingly aware that we just may not be alone. In the 1950’s only 3½ % of the US population believed in UFO’s while there was books being written of sightings with contact and a few abductions. A 1987 poll revealed 50 % believed in the existence of UFO’s and many claimed to be contacted via mental telepathy. Essentially there have been infrequent sightings that go back further in history than the 40’s. There has been to many people on the inside that know something unorthodox has been taking place.

The search for life outside the parameter of Earth began with Tesla who built an enormous transmitter(150 ft. tall) sending electromagnetic waves to Mars. Almost unanimously scientists now believe we may not be alone. How did we get to this new view of mankind as just another possible species in the universe? Fatima Secrets & UFO Demons Brother Michael Dimond Coast to Coast am 06-05-2011.mov. UFO Demons & Fatima Secrets. Fatima and UFO Demons - June 5, 2011. Hour Long Alien Creepy Documentary (2012) What is the Alien Gospel? "The heaven, even the heavens, are the Lord’s: but the earth hath he given to the children of men.” 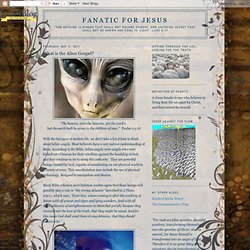 Psalm 115:16 With the fast pace of modern life, we don’t take a lot of time to think about fallen angels. Most believers have a very narrow understanding of them. According to the Bible, fallen angels were angels who were kicked out of heaven for their rebellion against the headship of God, and they continue to try to usurp His authority. Many Bible scholars and Christian leaders agree that these beings will possibly play a role in “the strong delusion” described in 2 Thess. 2:9-11, which says, ”Even him, whose coming is after the working of Satan with all power and signs and lying wonders, And with all deceivableness of unrighteousness in them that perish; because they received not the love of the truth, that they might be saved.

The Alien Gospel As we move into the future, the lies of extraterrestrial lineage, heritage, and creation will be disclosed. (YouTube link) Giants in the Bible. David slaying the giant Goliath – “And there were giants in those days, and after that..” 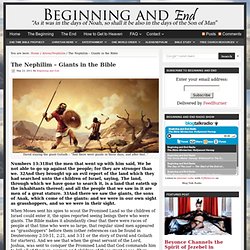 Numbers 13:31But the men that went up with him said, We be not able to go up against the people; for they are stronger than we. 32And they brought up an evil report of the land which they had searched unto the children of Israel, saying, The land, through which we have gone to search it, is a land that eateth up the inhabitants thereof; and all the people that we saw in it are men of a great stature. 33And there we saw the giants, the sons of Anak, which come of the giants: and we were in our own sight as grasshoppers, and so we were in their sight. When Moses sent his spies to scout the Promised Land so the children of Israel could enter it, the spies reported seeing beings there who were giants. So what is this all about? Aliens/Extraterrestrials are Really Demon Spirits! Are there really extraterrestrial and UFOs visiting planet Earth or are they really demon spirits masquerading as extraterrestrials? 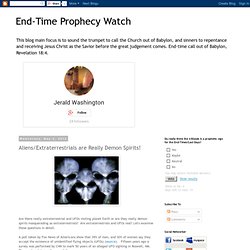 Are extraterrestrials and UFOs real? Let's examine these questions in detail. A poll taken by Fox News of Americans show that 39% of men, and 30% of women say they accept the existence of unidentified flying objects (UFOs) (source). Fifteen years ago a survey was performed by CNN to mark 50 years of an alleged UFO sighting in Roswell, NM. The results of that poll are as follows: 1. 80% of Americans thought the government hid knowledge of extraterrestrials 2. 54% believed intelligent life was outside the Earth 3. 44% said if they met an extraterrestrials they would be friends (26% believe they would be enemies) 4. 39% expected aliens not to look humanoid(source).

In Canada ,3 million people have said they have seen UFOs. There is even a UFO Religion. The "V" Series - End Time Alien Deception? The Alien Preparation Continues 2 Thessalonians 2:7 For the mystery of iniquity doth already work: only he who now letteth will let, until he be taken out of the way. 8 And then shall that Wicked be revealed, whom the Lord shall consume with the spirit of his mouth, and shall destroy with the brightness of his coming: 9Even him, whose coming is after the working of Satan with all power and signs and lying wonders, 10And with all deceivableness of unrighteousness in them that perish; because they received not the love of the truth, that they might be saved. 2 Corinthians 11:13 For such are false apostles, deceitful workers, transforming themselves into the apostles of Christ. 14 And no marvel; for Satan himself is transformed into an angel of light. 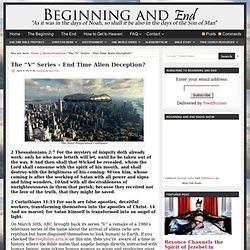 On March 30th, ABC brought back its series “V” a remake of a 1980′s television series of the name about the arrival of aliens (who are reptilian but have disguised themselves to look human) to Earth. Demons As Aliens? Enter Hollywood. ABC's "V" Season 2: Alien Deception Continues. The Alien Agenda: Mingle themselves with the seed of men In the first article about the ABC series “V” we went through many details to explain how the show promotes the idea of alien beings coming to Earth as the “saviors” of the planet and how this idea, which is also promoted by many figures in the New Age Movement, is one of that is very spiritually dangerous and can lead to much confusion in the church. 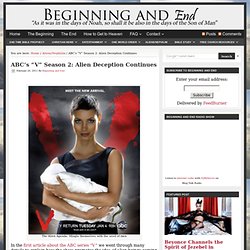 As stated before, I do not believe in extra-terrestrial beings but the Bible is clear that fallen angelic and demonic beings do exist, have interacted with humanity in the past and will do so again in the future. Now in its second season, some of this blog’s initial predictions about the show have come to pass. The 'Prometheus' Movie: The Alien Gospel Deception. Worship the Creator, not the creation. 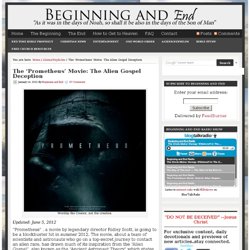 “Prometheus” , a movie by legendary director Ridley Scott, is going to be a blockbuster hit in summer 2012. The movie, about a team of scientists and astronauts who go on a top-secret journey to contact an alien race, has drawn much of its inspiration from the “Alien Gospel”, also known as the “Ancient Astronaut Theory” which states that aliens at some point in the distant past, created humanity and are responsible for the advanced knowledge held by ancient civilizations.

This type of theory, which is being promoted heavily in movies and television, completely denies God and helps to prepare the world for a Satanic deception. This article will shed light on the Bible’s clear explanation of the alien phenomenon and that there is “life out there” that is not from this planet. But it is not an extra-terrestrial race.

Ancient Aircraft & Spaceship Evidence. Ancient Giants and Cosmic Wars - April 20, 2011. Demonic Alien Agenda. Researcher and Teacher of God's Word From Creation to the End Times. Evolution is the bedrock of the end-times deception. 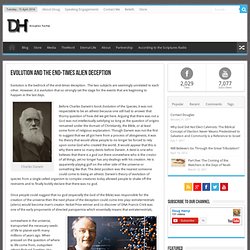 The two subjects are seemingly unrelated to each other. However, it is evolution that so strongly set the stage for the events that are beginning to happen in the last days. Charles Darwin Before Charles Darwin’s book Evolution of the Species, it was not respectable to be an atheist because one still had to answer that thorny question of how did we get here. Aliens Come From Hell.

Valley of the Giants Gary Stearman. UFOs: A Demonic Conspiracy. [[NOTE BY FSR EDITOR: There are still a surprisingly large number of people who seem to take all UFO reports with complete equanimity and, as it were, refuse to see anything "nasty" anywhere in it. Then, on the other hand, there are others, like Subdeacon Paul Inglesby and Cyril Marystone and Father Thomas Kulp, the author of this article, who take the opposite view and hold that every single case, without any exception whatsoever, is something straight out of Satan's bag.

And, finally, there are also a few of us who think that the truth of the matter probably lies somewhere in the middle, and that by the very nature of things, there are bound to be some "*Goodies*" (i.e. the ANGELIC FORCES) somewhere around. We shall have to go on probing all possible aspects of the question until we begin to feel that we can see a bit more clearly. Father Thomas Kulp is a priest of the Orthodox Church, and lives in the State of Wisconsin, USA, with his wife and seven children. As Fr. Researcher and Teacher of God's Word From Creation to the End Times. The Coming Strong Delusion: UFOs & Alien Deception. Angels, Demons, Nephilim and Aliens PT1. UFO ALIEN DECEPTION !! FALSE ALIEN ATTACK !! GOD OR satan !! CHOOSE WISELY !!