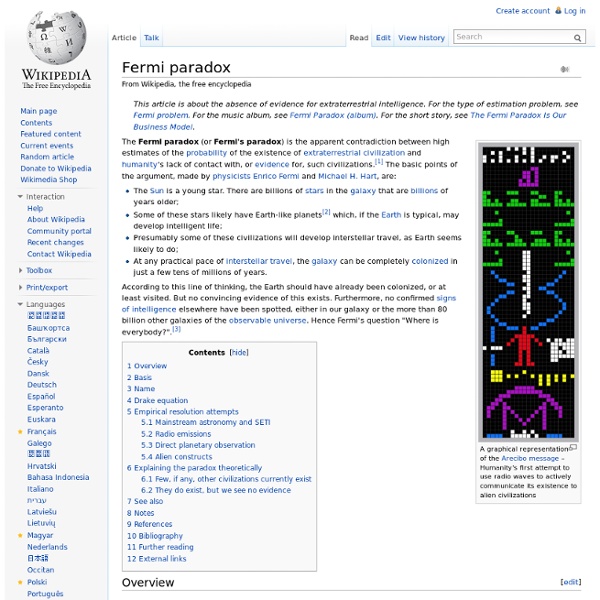 A graphical representation of the Arecibo message – Humanity's first attempt to use radio waves to actively communicate its existence to alien civilizations The Fermi paradox (or Fermi's paradox) is the apparent contradiction between high estimates of the probability of the existence of extraterrestrial civilization and humanity's lack of contact with, or evidence for, such civilizations.[1] The basic points of the argument, made by physicists Enrico Fermi and Michael H. Hart, are: The Sun is a young star. There are billions of stars in the galaxy that are billions of years older;some of these stars probably have Earth-like planets[2] which, if the Earth is typical, may develop intelligent life;presumably, some of these civilizations will develop interstellar travel, a technology Earth is investigating even now, such as that used in the proposed 100 Year Starship;at any practical pace of interstellar travel, the galaxy can be completely colonized in a few tens of millions of years.

NASA announced that it communicates with four races of aliens NASA’s spokesman Trish Chamberson openly admitted the existence of extraterrestrial civilizations and, moreover, noted that the National Agency is currently in contact with the four races of aliens. Her words were published in the edition «Waterford Whispers News». Chamberson said: Science fiction §Definition[edit] A futuristic setting is a common but not a necessary hallmark of science fiction. A common thread in science fiction is exploring the potential consequences of scientific and other innovations on people's lives. According to science fiction writer Robert A. Heinlein, "a handy short definition of almost all science fiction might read: realistic speculation about possible future events, based solidly on adequate knowledge of the real world, past and present, and on a thorough understanding of the nature and significance of the scientific method

Chariots of the Gods? Chariots of the Gods? Unsolved Mysteries of the Past (German: Erinnerungen an die Zukunft: Ungelöste Rätsel der Vergangenheit) is a book authored in 1968 by Erich von Däniken. It involves the hypothesis that the technologies and religions of many ancient civilizations were given to them by ancient astronauts who were welcomed as gods. Prior to publication, the book was extensively rewritten by its editor, Wilhelm Roggersdorf (a pen name of the German screenwriter Wilhelm "Utz" Utermann).[1][2][3] Why Aren't Aliens Calling Earth? This article was originally published on The Conversation. The publication contributed this article to Space.com's Expert Voices: Op-Ed & Insights. We’ve been conditioned by television and movies to accept the likelihood of intelligent life elsewhere in the universe.

This Is How Humans Are Energy Conductors For The Anunnaki – FerocesMente In the recent Global Energy Breakthrough Conference in Boulder, Colorado, Michael Tellinger shared his theory that sound is one of the most abundant forms of free energy on the planet. He said that sound is the primordial source of all things and is the common denominator of all creation. With that being said, if an extraterrestrial race wanted to harvest energy from the planet, it could create such energy with sound. There is evidence that the ancients used sound as energy Michael Tellinger is a South African scientist, explorer, and founder of the UBUNTU Liberation Movement.

Alien Origin Alien Origin is an 2012 American science fiction/Horror film produced by The Asylum and directed by Mark Atkins. The film stars Chelsea Vincent, Peter Pedrero, Philip Coc, Trey McCurley and Daniela Flynn. Plot[edit] In 2011, a group of soldiers and a journalist team head out to the jungles of Belize.

New evidence supports theory that life may have started on Mars New evidence presented by Professor Steven Benner at The Westheimer Institute for Science and Technology in Florida suggests that, billions of years ago, Mars was a much better place for the first cells to have formed compared to Earth. This gives more weight to the theory that life may have started on the Red Planet and then found its way to Earth aboard a meteorite. Life on Earth

Composting toilet Public composting toilet facility on E6 highway in Sweden A composting toilet is a dry toilet that uses a predominantly aerobic processing system that treats excreta, typically with no water or small volumes of flush water, via composting or managed aerobic decomposition.[1] Composting toilets may be used as an alternative to flush toilets in situations where there is no suitable water supply or waste treatment facility available or to capture nutrients in human excreta as humanure. They are in use in many of the roadside facilities in Sweden and in national parks in both the United States and the United Kingdom.

NASA admits: Someone took control of our aircraft, we received messages from an unknown language Space probe “Voyager 2” during its path through space sent a message to the base of the Earth in a quite unintelligible language. NASA after over six years did not know the reason, but they know that it can not be accidental. “Voyager 2” is the first spacecraft to leave the solar system in 2010 and it was in the moments when the spacecraft could enter into interstellar space that a strange thing happened, that NASA would consider “someone or something” had assumed control over it. “At a distance of about 15 billion kilometers from Earth, the probe suddenly started sending data in a language which they could never understand,” said NASA expert Kevin Baines, reports Physics Astronomy. “Something or someone changed the communications system of the space probe Voyager 2,” added Baines.