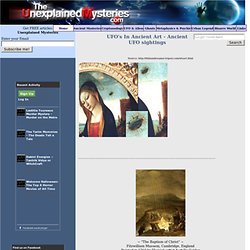 Clear photos of UFO taken by Antonio Urzi with a camera connected to a telescope, Italia. Dead alien found in UFO hotspot in Russia ; With translation. Sakurajima Unexplained Light and Ufos - 7/11/2011 Japan. 1976 Tehran UFO incident. The 1976 Tehran UFO Incident was a radar and visual sighting of an unidentified flying object (UFO) over Tehran, the capital of Iran, during the early morning hours of 19 September 1976. 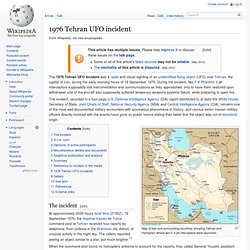 During the incident, two F-4 Phantom II jet interceptors supposedly lost instrumentation and communications as they approached, only to have them restored upon withdrawal; one of the aircraft also supposedly suffered temporary weapons systems failure, while preparing to open fire. The incident, recorded in a four-page U.S. Defense Intelligence Agency (DIA) report distributed to at least the White House, Secretary of State, Joint Chiefs of Staff, National Security Agency (NSA) and Central Intelligence Agency (CIA), remains one of the most well-documented military encounters with anomalous phenomena in history, and various senior Iranian military officers directly involved with the events have gone on public record stating their belief that the object was not of terrestrial origin. 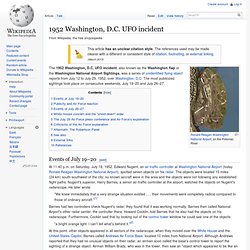 UFO incident, also known as the Washington flap or the Washington National Airport Sightings, was a series of unidentified flying object reports from July 12 to July 29, 1952, over Washington, D.C. The most publicized sightings took place on consecutive weekends, July 19–20 and July 26–27. Events of July 19–20[edit] At 11:40 p.m. on Saturday, July 19, 1952, Edward Nugent, an air traffic controller at Washington National Airport (today Ronald Reagan Washington National Airport), spotted seven objects on his radar. The objects were located 15 miles (24 km) south-southwest of the city; no known aircraft were in the area and the objects were not following any established flight paths. "We knew immediately that a very strange situation existed . . . their movements were completely radical compared to those of ordinary aircraft Barnes had two controllers check Nugent's radar; they found that it was working normally. 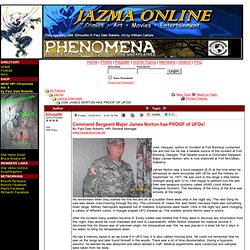 By Paul Dale Roberts, HPI General Managerwww.hpiparanormal.net John Vasquez, author of ‘Incident at Fort Benning’ contacted me and told me he has a reliable source of the incident at Fort Benning, Georgia. That reliable source is Command Sergeant Major James Norton, who is now stationed at Fort McClellan, Alabama. James Norton was a buck sergeant (E-5) at the time when he witnessed an eerie encounter with UFOs and the military on September 14, 1977. He was sent to the range a little before midnight along with 12 to 1300 troops to perform live fire with their new weapons systems called JAWS (Joint Attack Weapons System). He remembers when they started the live fire and all of a sudden there were orbs in the night sky. 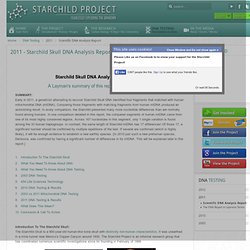 Comparing those fragments with matching fragments from human mtDNA produced an astonishing result. In every comparison, the Starchild presented many more nucleotide differences than are normally found among humans. Top 10 UFO sightings: Are they more believable than those red lights over Lafayette? (VIDEOS) Former Apollo astronaut Edgar Mitchell calls on the US government to 'open up' about aliens. The truth is out there. 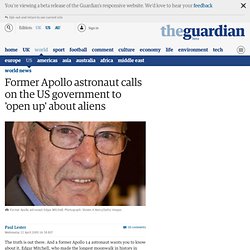 And a former Apollo 14 astronaut wants you to know about it. Edgar Mitchell, who made the longest moonwalk in history in 1971, says alien life does exist and the US government is blocking the information from getting out. On Monday Mitchell addressed the issue of extraterrestrial life at the National Press Club in Washington after the X-Conference, a convention of UFO researchers and activists. "We are being visited," he said. "It is now time to put away this embargo of truth about the alien presence.

[Permission needed to reproduce any material from this article] A US intelligence agency that denied its very existence for decades has likely already determined the true nature of the UFO phenomena, and has kept its discoveries from the public for over a half-century. This agency has the ability to “see” anything anywhere at any time as it is happening - even outside of our atmosphere. They have detected airspace intrusions of all kinds – including most assuredly, those of Unidentified Flying Objects. The degree of precision with which they operate is so astounding -and the scope of their global coverage is so vast - that there is only one conclusion that can be drawn about this ultra-secret agency: If extraterrestrial craft have entered the Earth’s realm, they are aware of them and they have filmed them. These images – and their accompanying technical analysis- have never been released to the public. On January 23, 1975, a “further reply” was received.

Triangle UFO’s Spotted Over California, Las Vegas, Colorado, Massachusetts Videos. A Debt Management Plan (DMP) is an agreement formulated with your creditors, by a debt manager, to repay your debt in monthly instalments. 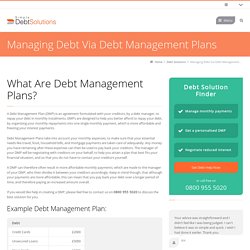 DMPs are designed to help you better afford to repay your debt, by organising your monthly repayments into one single monthly payment, which is more affordable and freezing your interest payments.Debt Management Plans take into account your monthly expenses, to make sure that your essential needs like travel, food, household bills, and mortgage payments are taken care of adequately. Any money you have remaining after these expenses can then be used to pay back your creditors. The manager of your DMP will be negotiating with creditors on your behalf, to help you attain a plan that best fits your financial situation, and so that you do not have to contact your creditors yourself.A DMP can therefore often result in more affordable monthly payments, which are made to the manager of your DMP, who then divides it between your creditors accordingly. 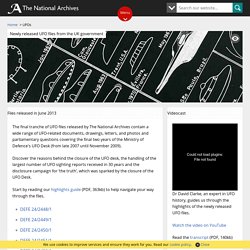 UFO Night Vision PA. Past JSE Research Articles from SSE. Retired Army Colonel Says UFOs Are Real, But Denies Government Cover-Up. Whether you believe or disbelieve the notion that UFOs are visitors from another planet, a former highly decorated military officer now comes forward with information that may infuriate those on both sides in the ongoing ET debate. Retired Col. John Alexander , using his military savvy and high security clearance, spent a quarter of a century going through the top levels of the U.S. government and military searching for the group of people who were allegedly responsible for UFO information and the supposedly decades-old UFO cover-up. 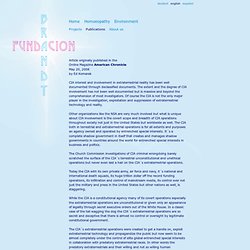 The extent and the degree of CIA involvement has not been well documented but is massive and beyond the comprehension of most investigators. Of course the CIA is not the only major player in the investigation, exploitation and suppression of extraterrestrial technology and reality. Other organizations like the NSA are very much involved but what is unique about CIA involvement is the covert scope and breadth of CIA operations throughout society not just in the United States but worldwide as well.

The CIA both in terrestrial and extraterrestrial operations is for all extents and purposes an agency owned and operated by entrenched special interests. Chemainus ufo video. Line of UFOs Behind ISS [Not a Lens Flare] NASA Moves Camera to Avoid UFOs !? Feb. 3, 2011. Strange lights appear in the sky above Utah County - ABC 4.com - Salt Lake City, Utah News. UFO North of Duncan Near Hidden Hills Road by Westholme (Part 2) DR. ROGER LEIR - The Turkey UFO Events. Man Abducted By UFO. Most important images of a UFO ever filmed" 2008, Turkey.

UFO over Kurdistan - Not Fake 14.1.2008 (new) Taiwan News reports UFO sighting. UFO & Paranormal News. My Great Grandfather Ike Knew about UFO and Alien visits to Earth Secrets are not healthy and perhaps it is time the secrets of contact with aliens on the part of the US government and knowledge of UFO visitation be revealed. Yes, that's right, the US is in contact with ETs and knows full well that some UFO sightings are of alien origin. As my name suggests I am a great granddaughter of President Dwight D Eisenhower and I should say from the start that I am fairly certain Ike was aware of aliens visiting Earth. In so many ways it was obvious. For starters there were the little comments here and there. STS-80 - Never explained video of UFOS. Disclosure War at Critical Mass: Birds, Fish and Political Deaths - Part Two. Excellent UFO Footage In Santiago Chile, Dec 2010. WikiLeaks’ Julian Assange Threatens with Soprano-Style ‘Insurance’ if Killed or - Los Angeles ufo.

Julian Assange, founder of Wikileaks, is threatening to use Soprano-style blackmail if he is killed by the CIA or, less dramatically, sued by the federal government. “If I am killed or detained for a long time, there are 2,000 websites ready to publish the remaining files. We have protected these websites through very safe passwords,” said Assange in an interview with Al Jazeera television. In other words, if Assange is killed or arrested, thousands of classified documents will be released on the web simultaneously. The files are heavily-encrypted, but could be streamed to millions more computers almost instantaneously in the event of Assange's untimely demise. Defence lifts lid on Kiwi X-files - national. Last updated 05:00 22/12/2010 Thousands of secret files on New Zealand's UFO reports are set to be made public, nearly 32 years to the day after our most famous sighting. The files include every witness account of unidentified flying objects reported to authorities since the early 1950s, including the 1978 Kaikoura mystery.

They had been held by Archives New Zealand, which was to make them available in February after requests from the public, but the Defence Force stepped in, saying it needed to remove personal identification to comply with the Privacy Act. The Defence Force promised to release the files by the end of this year and is due to make them public this week. Israelis Shoot Down UFO Over Nuclear Power Plant. WikiLeaks Set To Reveal Secret “US-UFO War” Docs, according to Kremlin report - Dateline Zero. 3 mysterious objects discovered coming right at Earth... Well, this is an interesting story... An Astrophysicist from SETI has announced that he had made a rather startling discovery out on deep space...

The Big Study. And then there was light. UFO 8/06/2010. Ancient Anomalies and Aliens - Part 1: Art. Ancient Anomalies and Aliens - Part 1: Art Even though I wanted to do this whole thing in one massive thread, I just don't have the time to put something like that together. President John F Kennedy Secret Society Speech version 2. Paranormal, UFOs, Cryptids and Unexplained Phenomena. Blood History and our Extra Terrestrial Origins. Web Bot. VIDEO: Air Force officers discuss UFO sightings at National Press Club - Dateline Zero. Buzz Aldrin Reveals Existence of Monolith on Mars Moon.