Great Circle. Great circles are straight lines that go all the way around the center of the earth. 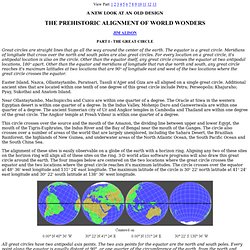 Timothy Freke and Peter Gandy: Jesus the Myth, Heavenly Christ. Philosopher, Historian, Biographer, Travel Writer & Poet. Ancient Alien Artifacts & Mayans with Nassim Haramein. Robert M. Schoch: The Official Website of. Klaus Dona : The Hidden History of the Human Race (March 2010) DVDs - Ancient & Lost Civilizations. KRYDER EXPLORATION Research and Recovery Team's Official Website - EGYPT - Secrets Found. Having a never ending curiosity and having wondered for many years, what would be the result if I had applied the secret template ciphers I know and use here in the USA to Egypt? 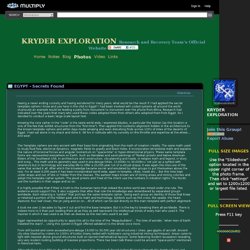 I had been involved with coded systems all around the world vicariously an example would be leading a party from monument to monument over the phone from Africa. Research had indicated over the years that many who used these codes adopted them from others who adopted them from Egypt. So I decided to conduct a basic large scale layout test. Origins of the Ark of the Covenant Knights Templar Ethiopia Freemasonary Kabbalah part 1 of 7. Nassim Haramein on the Ark of the Covenant and The Knights Templar. The 2012 Enigma by David Wilcock.

2012 Event Horizon: (1) Prophecies and Science of a Golden Age, by David Wilcock. David Wilcock: The Source Field Investigations. GrahamHancock.com. I don't want GRAHAMHANCOCK.COM to be exclusively a Graham Hancock site, but a place where ideas and perspectives on the past can be put forward and discussed by other writers and researchers as well -- and indeed by anyone with something interesting to say and the ability to say it. 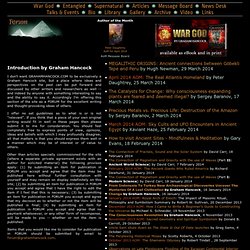 Accordingly I'm offering this section of the site as a FORUM for the excellent writing and thought-provoking ideas of others. I offer no set guidelines as to what is or is not "relevant". If you think that a piece of your own original writing would fit in well in these pages then please submit it to me for consideration.

You should feel completely free to express points of view, opinions, ideas and beliefs with which I may profoundly disagree; all that matters is that you should express them well in a manner which may be of interest or of value to others. Items that you would like me to consider for publication in FORUM should be submitted by email to forum@grahamhancock.com. Graham Hancock: Fingerprints of the Gods. Setting History Free: Graham Hancock & David Wilcock. Graham Hancock's "Quest For The Lost Civilization" **FULL MOVIE** Graham Hancock Presenting at the 2012 Conference. 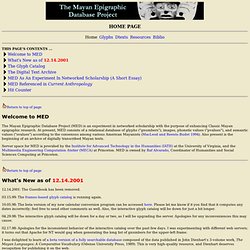 At present, MED consists of a relational database of glyphs ("gnumbers"), images, phonetic values ("pvalues"), and semantic values ("svalues") according to the consensus among various American Mayanists (MacLeod and Reents-Budet 1994). Also present is the beginning of an archive of digitally transcribed Mayan texts. Server space for MED is provided by the Institute for Advanced Technology in the Humanities (IATH) at the University of Virginia, and the Multimedia Engineering Computation Atelier (MECA) at Princeton. What's New as of 12.14.2001 12.14.2001: The Guestbook has been removed. 03.15.99: The frames-based glyph catalog is running again. 10.05.98: The beta version of my new calendar conversion program can be accessed here.

The 12th Planet written by Zecharia Sitchin (Audiobook) Visitations of the Annunaki - Coast to Coast AM. Coast To Coast AM Superstorm/ ETs & Humankind. Ancient Astronauts: The Gods From Planet X FREE MOVIE. A different story about ancient Egypt and our origins. The Invisible Science. The Clock of Giza (1/2) The Dogon Code: Linking Egypt and West Africa Pt.1.