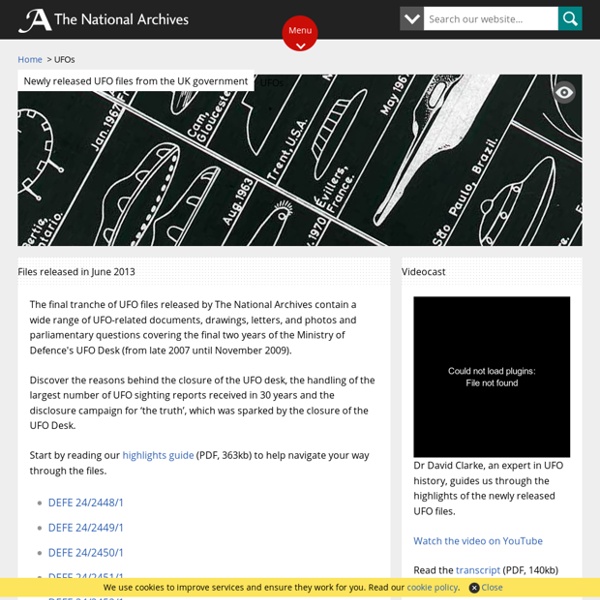 Skip to Main Content Home > UFOs UFOs Newly released UFO files from the UK government Files released in June 2013 The final tranche of UFO files released by The National Archives contain a wide range of UFO-related documents, drawings, letters, and photos and parliamentary questions covering the final two years of the Ministry of Defence's UFO Desk (from late 2007 until November 2009). Discover the reasons behind the closure of the UFO desk, the handling of the largest number of UFO sighting reports received in 30 years and the disclosure campaign for ‘the truth’, which was sparked by the closure of the UFO Desk. Start by reading our highlights guide (PDF, 363kb) to help navigate your way through the files. Previous file releases The National Archives holds other UFO files that have already been released by the Ministry of Defence. Videocast Could not load plugins: File not found Dr David Clarke, an expert in UFO history, guides us through the highlights of the newly released UFO files. Bookshop

Retired Army Colonel Says UFOs Are Real, But Denies Government Cover-Up Whether you believe or disbelieve the notion that UFOs are visitors from another planet, a former highly decorated military officer now comes forward with information that may infuriate those on both sides in the ongoing ET debate. Retired Col. John Alexander , using his military savvy and high security clearance, spent a quarter of a century going through the top levels of the U.S. government and military searching for the group of people who were allegedly responsible for UFO information and the supposedly decades-old UFO cover-up. His conclusions: Not only is there no such group and no cover-up, but disclosure about UFOs has already occurred on different official levels. Courtesy John Alexander Retired Army Col. Flying Saucers to Mind Control: 7 Declassified Military & CIA Secrets By Denise Chow, Staff Writer | October 04, 2013 07:47am ET Credit: U.S. Air Force Government and military secrets can range from terrifying to amusing to downright absurd, but most are nothing short of intriguing. From a secret U.S.

ISIS : A CIA Creation to Justify War Abroad and Repression at Home Through terrifying headlines and shocking videos, ISIS is being used as a tool to justify war in the Middle East and to cause fear and panic worldwide. No, this is not a “crazy conspiracy theory”, it is simply the oldest trick in the book. ISIS was created by the very forces that are fighting it. Ever since the creation of democratic nations – where public opinion somewhat matters – the political class is faced with a dilemma: War is needed to gain power, riches, and control, but the general public has a tendency to be against it.

These YouTube Videos Supposedly Induce Insomnia Curing ‘Brain Orgasms’ via Huffington Post It’s a sensation that also goes by autonomous sensory meridian response, or ASMR: a non-clinical term for the relaxing, tingling feeling at the top of the head that proponents say can lead to a number of therapeutic, if scientifically unproven, benefits. Brittany Connolly, a maker of ASMR videos, told The Huffington Post by email that ASMR clips have helped her through “both anxiety disorders and sleep problems.”

Alien Moon Bases-Government Cover up Alien Bases On The Moon? The Truth Revealed. It isn't well known that the Governments have been covering up the fact the aliens have bases on the moon. There are many facts, Pictures, videos, satellite images, and testimonies that create hard evidence of this fact. From well known respected scientists, Astronauts, and military personal we gain a pretty define perspective on this subject. First we have this video here which is part of the disclosure project that starts off with a women talking to Military personnel about an image from space that has an Unidentified Flying object in it.

Triangle UFO’s Spotted Over California, Las Vegas, Colorado, Massachusetts Videos A Debt Management Plan (DMP) is an agreement formulated with your creditors, by a debt manager, to repay your debt in monthly instalments. DMPs are designed to help you better afford to repay your debt, by organising your monthly repayments into one single monthly payment, which is more affordable and freezing your interest payments.Debt Management Plans take into account your monthly expenses, to make sure that your essential needs like travel, food, household bills, and mortgage payments are taken care of adequately. Any money you have remaining after these expenses can then be used to pay back your creditors. The manager of your DMP will be negotiating with creditors on your behalf, to help you attain a plan that best fits your financial situation, and so that you do not have to contact your creditors yourself.A DMP can therefore often result in more affordable monthly payments, which are made to the manager of your DMP, who then divides it between your creditors accordingly.

National Security Agency (NSA) Releases UFO Files It’s November 2012, many people on the planet are aware that dozens of governments have been releasing their UFO files. Thousands of UFO files are now available in the public domain. These files indicate that governments have departments within them that monitor and study the UFO phenomenon. Does Rh Negative Blood Type Equal Alien Heritage? Last updated on January 30, 2010 at 9:00 am EDT by in5d Alternative News * Visit in5D Connection where you can find your soul mate or join one of our amazing groups. EVERYONE is welcome! Why does the human race have so many different blood types and Rh values when we supposedly came from 'Adam and Eve'?

Webstock - New Zealand's web conference Game designer and future forecaster Jane McGonigal takes both work and play seriously. She writes and speaks about the power of digital games, virtual worlds and other immersive experiences to change reality and to shape our future, while at the same time creating the same types of games professionally. As a designer, Jane is known as the “queen bee of alternate reality games” (ARGs), a leading-edge genre of massively collaborative computer games that use meaningful play to create global collective intelligences. As one of the world’s first and foremost ARG designers and the leading academic researcher in this field, Jane’s work focuses on how meaningful play can teach 21st century skills to improve people’s thinking and social relations.

V-Library - Veritas The V-Library (Veritas Library) is an online collection of e-books by various authorities in the field of metaphysics and the occult. All the e-books are free for use and are public domain resources. "The idea for this came to me when seeing the Bob Hendricks Memorial CM Library on OccultForums and after seeing the Sacred Magick website fall victim to bandwidth strangulation. I figured veritas could use a Library for each of its varied subjects. A post will be made in Psionics, Body Energy Arts, Magick and Spirituality after I find enough files to make a decent post. I would Like to Thank Bob Hendricks for his phenomenal Library and the inspiration to spread the information via this Index, God rest his Soul." - Adept