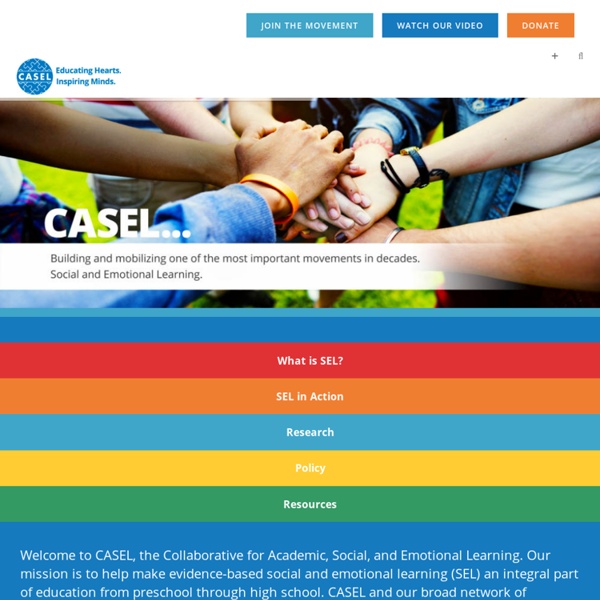 Amygdala Human brain in the coronal orientation. Amygdalae are shown in dark red. Structure[edit] MRI coronal view of the left amygdala Anatomically, the amygdala[7] and more particularly, its central and medial nuclei,[8] have sometimes been classified as a part of the basal ganglia. Hemispheric specializations[edit] The most interesting line in Obama’s Howard speech was about empathy, not ‘blackness’ President Obama's speech at Howard University's commencement on May 7 was full of advice on civic engagement, black history and democracy. (The Washington Post) In the next few dizzying weeks, when one public figure and elected official after another will don academic robes and stoles to deliver commencement speeches at colleges and universities across the country, some ideas will inevitably be repeated. Dream big. Work hard. To thine own self be true.

Titre du site Web - GERG - Geneva Emotion Research Group The Geneva Emotion Research Group, co-directed by Professors Klaus Scherer, David Sander, and Didier Grandjean is part of an multidisciplinary center for the affective sciences (Centre Interfacultaire en Sciences Affectives - CISA) at the University of Geneva. The members of our group work on theoretical development and empirical research in the affective sciences. We conduct research into many aspects of emotions, with special emphasis on emotion-constituent appraisal processesmultimodal expression of emotion in face, voice, and bodycentral and peripheral physiological reaction patternssubjective experience of emotional processesneural structures and circuits underlying the emotion process Our research methods include experimental studies in both laboratory and field settings, using emotion induction and sampling of naturalistic emotions, as well as computer-simulation approaches.

Social and Emotional Learning: What is it? How can we use it to help our children? Introduction What skills are the best predictors of academic and life success? Why is it that some children grow up to be fulfilled adults in challenging careers and satisfying relationships, while other children, from apparently similar backgrounds and academic performance, struggle in relationships, dead-end careers and depressions? 7 Reasons To Leverage Social Networking Tools in the Classroom Instructional uses of social networking software can provide opportunities for learning, connecting, and engagement. This year, I’ve written frequently about popular social media tools, and education-specific social networking apps, and social enterprise solutions. I’ve also noticed increasing coverage of this topic in the media recently. Maybe it’s just me paying more attention to it … or maybe it signals an increasing acceptance of these types of tools as legitimate and effective resources for the classroom. Social networking tools aren’t going away any time soon, they appear to be here for the long term. But do these kinds of applications really belong in the classroom?

Donald Trump isn’t empathetic. Is that a problem? Donald Trump has cleared every electoral hurdle before him in this presidential race. He went from 1 percent, literally, to the top of the polls. He beat 16 other people for the Republican nomination. He finds himself in a statistical dead heat with likely Democratic nominee Hillary Clinton. And, he has done it all by being himself: brash, bold, controversial and unapologetic. Illinois Learning Standards for Social/Emotional Learning(SEL) The standards describe the content and skills for students in grades K - 12 for social and emotional learning. Each standard includes five benchmark levels that describe what students should know and be able to do in early elementary (grades K - 3), late elementary (grades 4 - 5), middle/junior high (grades 6-8), early high school (grades 9-10), and late high school (grades 11-12). These standards build on the Illinois Social/Emotional Development Standards of the Illinois Early Learning Standards.

Related:  kaydog • Social Emotional Learning • captinstarshine • SEL Resources • More SJ and General Resources • competencias S XXI
Related:  dotk777   -  Creativity and Empathy   -  Empathy   -  Empathy   -  Empathy   -  Ken Robinson says schools kill creativity | Video on TED.com   -  RSA Animate - The Empathic Civilisation - YouTube   -  Jeremy Rifkin: "The empathic civilization" | Video on TED.com   -  David Brooks: The social animal | Video on TED.com   -  Sam Richards: A radical experiment in empathy | Video on TED.com   -  NOVA | Mirror Neurons   -  Thandie Newton: Embracing otherness, embracing myself | Video on TED.com   -  David Kelley: How to build your creative confidence | Video on TED.com   -  Why We Cry: The Science of Sobbing and Emotional Tearing | Brain Pickings   -  Six Habits of Highly Empathic People   -  RSA Animate - The Power of Outrospection - YouTube   -  Take a Seat - Make a Friend? - YouTube   -  Empathy - YouTube   -  5-Minute Film Festival: Videos on Kindness, Empathy, and Connection   -  When Power Goes To Your Head, It May Shut Out Your Heart   -  How Should We Live: History’s Forgotten Wisdom on Love, Time, Family, Empathy, and Other Aspects of the Art of Living | Brain Pickings   -  30 traits of an Empath (How to know if you’re an Empath)   -  RSA Shorts - The Power of Empathy - YouTube   -  Brené Brown on Vulnerability, Human Connection, and the Difference Between Empathy and Sympathy, Animated | Brain Pickings   -  The Mask You Live In - Trailer - YouTube   -  The Dark Side of Emotional Intelligence   -  Empathy Library   -  10 facts about infidelity, as divulged by Helen Fisher | TED Blog   -  Six Habits of Highly Empathic People   -  18 Things Highly Creative People Do Differently | The Huffington Post   -  Fuel Creativity in the Classroom With Divergent Thinking   -  Yann Dall'Aglio: Love -- you're doing it wrong   -  "Unsung Hero" (Official HD) : TVC Thai Life Insurance 2014 : โฆษณาไทยประกันชีวิต 2557 - YouTube   -  5 Strategies to Read People’s Emotional Energy | Earth. We are one.   -  Signs That You Lack Emotional Intelligence   -  New Study Links Social Anxiety To Being An Empath   -  Why Some Teams Are Smarter Than Others   -  Digital Detox® LLC. - Disconnect to Reconnect   -  Emotional Intelligence: The Social Skills You Weren't Taught in School   -  The secret ingredient that makes some teams better than others