Why Some Teams Are Smarter Than Others 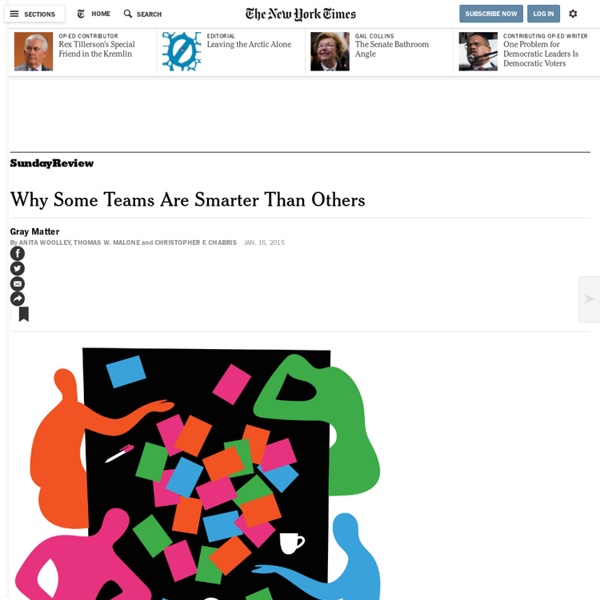 Individual intelligence, as psychologists measure it, is defined by its generality: People with good vocabularies, for instance, also tend to have good math skills, even though we often think of those abilities as distinct. The results of our studies showed that this same kind of general intelligence also exists for teams. On average, the groups that did well on one task did well on the others, too. In other words, some teams were simply smarter than others. We next tried to define what characteristics distinguished the smarter teams from the rest, and we were a bit surprised by the answers we got. We gave each volunteer an individual I.Q. test, but teams with higher average I.Q.s didn’t score much higher on our collective intelligence tasks than did teams with lower average I.Q.s. Instead, the smartest teams were distinguished by three characteristics. First, their members contributed more equally to the team’s discussions, rather than letting one or two people dominate the group.

How to Plan a Team Offsite That Actually Works All around the world, teams large and small assemble at offsite locations to take a step away from their day-to-day work and build team spirit. Unfortunately, many team building offsites turn out to be ineffective, or worse. Sometimes, it’s because the sense of unity and cohesion that gets created when everyone is together having “fun” outside of the office doesn’t last long once everyone gets back to work. Other times, “team building activities” have the unintended consequence of bringing out competition and hostility between individuals instead of enhancing commitment and cohesion within the team.

How to build a team like NASA The U.S. job market seems to be reliably back on its feet, and it’s signalling a sea change for employers and employees alike. Job seekers are no longer desperate for any opportunity that comes along. Those who are currently employed are discarding the I’m-just-thankful-I-have-a- job mindset. At long last, many people have the luxury of stepping back, taking stock, and figuring out what they really want out of a job, career and company. This means businesses are suddenly facing serious competition for talent, something they haven’t had to deal with in a while. Why Being In a Group Causes Some to Forget Their Morals Three reasons good people do bad things. When people are in a group they are more disconnected from their moral beliefs, according to new neuroscientific research. The results come from a study which compared how people’s brains work when they are alone compared with when they are in a group (Cikara et al., 2014). The study was inspired by a trip to Yankee Stadium in New York made by Dr Mina Cikara, now an assistant professor at Carnegie Mellon University. On the trip her husband was wearing a Red Sox cap (for non-US readers: the Red Sox are a rival team from Boston). He was continuously heckled by Yankee fans, so Mina took the cap from her husband and wore it herself:

After years of intensive analysis, Google discovers the key to good teamwork is being nice — Quartz When Fox News’ Chris Wallace asked Donald Trump about his thoughts on climate change, the president-elect responded, “Nobody really knows. Look, I’m somebody that gets it, and nobody really knows. It’s not something that’s so hard and fast.” He’s not alone; according to Pew Research less than half (48%) of all American adults believe that the Earth is warming mostly due to human activity. They are wrong, though, and 2016 was the year that news from around the world made climate change undeniable to anyone paying attention. A record amount of coral perished in the Great Barrier Reef

Don’t Just Play Nice When confronted with conflicts or difficulties at work, often we find ourselves seeking agreement, order, and “pleasantness.” At first glance this appears appropriate—even obvious. But more often than not, seeking harmony in order to promote a healthy workplace can diminish creativity, hamper communication, and stunt growth over the long run. In his book Managerial Courage, management consultant and psychologist Harvey Hornstein concludes from his research that when pursuing harmony in the face of conflict, we can find ourselves mistakenly anesthetizing our creative thinking and skillfulness. “What often emerges under the pressure to get along, be nice, and work and play well together is an uncontroversial package of rules about how to act and what to think, distinguished only by their blandness,” he writes.

Simple Ways Leaders Can Help to Refocus a Team’s Negative Outlook A mindset increasingly prevalent in today’s workplace that infects other team members’ motivation and drive is a negative attitude. In order to learn how to influence an employee’s negative outlook, it is important to first understand its origins. In an article published in the The Journal of Organizational Development, researchers determined three major internal events that feed negative emotions in the office: 1) perceptions of an insecure future 2) perceptions of inadequate treatment by the employer 3) perceptions of inadequate working conditions 10 Truths About Building School Teams I've spent the last ten years serving on and attempting to build effective teams of educators -- to various degrees of success. This last year, I've been writing a lot about team development. I first articulated the following "ten truths" for myself when I coached a team some years ago. I used these to remind myself of what it would take to build a resilient, high-performing team that worked in challenging contexts. I was hesitant to call them "truths," but these ideas have been tried and tested, and they feel truer to me than anything else when building a team.

The New Science of Building Great Teams Artwork: Andy Gilmore, Chromatic, 2010, digital drawing If you were looking for teams to rig for success, a call center would be a good place to start. The skills required for call center work are easy to identify and hire for. The tasks involved are clear-cut and easy to monitor. Just about every aspect of team performance is easy to measure: number of issues resolved, customer satisfaction, average handling time (AHT, the golden standard of call center efficiency). Trust fall A trust fall is a purported trust-building game often conducted as a group exercise in which a person deliberately allows themselves to fall, relying on the other members of the group (spotters) to catch the person.[1] There are many variants of the trust fall. For instance, in one type, the group stands in a circle, with one person in the middle with arms folded against his chest and falls in various directions, being pushed by the group back to a standing position before falling again. In another variant, a person stands on an elevated position (such as a stage, stepping stool or tree stump) and relying on multiple people to catch the person. This variant is potentially more dangerous and therefore it is all the more crucial to have the rest of the group in position and ready to catch him before he steps onto the platform. This type of trust fall was shown in the film Mean Girls during the "attitude makeover" scene, and in season 4 of HBO drama The Wire.

re:Work - Guide: Understand team effectiveness Much of the work done at Google, and in many organizations, is done collaboratively by teams. The team is the molecular unit where real production happens, where innovative ideas are conceived and tested, and where employees experience most of their work. But it’s also where interpersonal issues, ill-suited skill sets, and unclear group goals can hinder productivity and cause friction.