When Power Goes To Your Head, It May Shut Out Your Heart 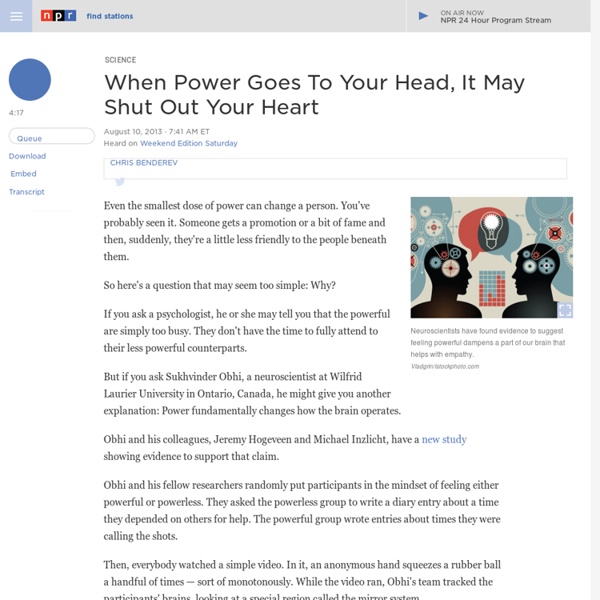 The neuroscience of dying: Brain activity continues up to 30 seconds after blood flow stops By Agence France-PresseMonday, August 12, 2013 16:49 EDT There may be a scientific explanation for the vivid near-death experiences, such as seeing a shining light, that some people report after surviving a heart attack, US scientists said Monday. Apparently, the brain keeps on working for up to 30 seconds after blood flow stops, according to a study published in the Proceedings of the National Academy of Sciences. University of Michigan scientists did their research on nine lab rats that were anesthetized and then subjected to induced cardiac arrest as part of the experiment. In the first 30 seconds after their hearts were stopped, they all showed a surge of brain activity, observed in electroencephalograms (EEGs) that indicated highly aroused mental states. “We were surprised by the high levels of activity,” said senior author George Mashour, professor of anesthesiology and neurosurgery at the University of Michigan. “Do we know if animals experience ‘consciousness’? Agence France-Presse

Six Emotional Leadership Styles - Leadership Training From MindTools Choosing the Right Style for the Situation Find out how emotional leadership styles can affect your team's happiness. © iStockphoto/Kuklev Imagine that you work with a positive, charismatic leader. She's excited about the future of the organization, and she shares this excitement with her team. She makes sure that people understand how their efforts contribute to this future, and this inclusion sparks loyalty and intense effort in the team. Generally, morale and job satisfaction are high, because team members feel that they're making a difference. However, some people in her team don't respond well to this style of leadership. She could be more effective by varying her approach to leadership, depending on the situation; and she could do this by using "six emotional leadership styles," each of which is useful in different circumstances. In this article, we'll look at these six emotional leadership styles. The Six Emotional Leadership Styles Note: We'll now examine each style in more detail. 1. 2.

Synchronized virtual reality heartbeat triggers out-of-body experiences New research demonstrates that triggering an out-of-body experience (OBE) could be as simple as getting a person to watch a video of themselves with their heartbeat projected onto it. According to the study, it's easy to trick the mind into thinking it belongs to an external body and manipulate a person's self-consciousness by externalizing the body's internal rhythms. The findings could lead to new treatments for people with perceptual disorders such as anorexia and could also help dieters too. In a typical out-of-body experience a person either experiences a feeling of floating outside of their body or of viewing it from outside of themselves. For instance we know that our reflection isn't actually part of us. It's possible to expand this feeling to include the whole body as demonstrated in experiments that get a person to identify more with a virtual double than their own body by using virtual reality goggles. The experiment can be seen in the video below

untitled Neurobiology of a hallucination Hallucinations are often associated with psychiatric conditions such as schizophrenia or with LSD and related drugs. Hearing voices is a characteristic symptom which is reported by about 70% of schizophrenic patients, as well as by some 15% of patients with mood disorders such as depression; and those under the influence of LSD often experience extreme spatial distortions and surreal visions. Most common are auditory and visual hallucinations, but the other senses can also produce mirages. Temporal lobe epilepsy or brain injury can lead to phantosmia, or olfactory hallucinations, during which one detects pleasing or foul smells (e.g. fresh flowers or rotting flesh) that are not actually present. More unusual is a tactile hallucination in which one experiences the sensation of insects crawling under the skin. Hallucinations arise spontaneously and are transient in nature, and so the neural activity underlying them is difficult to study.

The Emotion Which Drives People To Work The Hardest People prone to this emotion work the hardest. People prone to feeling guilty are amongst the hardest workers, a new study finds. Not only that but people prone to feeling guilty are also highly ethical and are less likely to take advantage of other people’s skills to get paid more. The results come from research published in the Journal of Personality and Social Psychology, in which psychologists carried out 5 studies to test the effects of feeling guilty on work performance (Wiltermuth & Cohen, 2014). Dr. Scott S. “Because of this concern for the impact of their actions on others’ welfare, highly guilt-prone people often outwork their less guilt-prone colleagues, demonstrate more effective leadership and contribute more to the success of the teams and partnerships in which they are involved.” Set against these advantages, though, guilt-prone people may avoid working with others they see as more competent than themselves. Dr. Dr. Image credit: SalFalko

Brain stimulation affects compliance with social norms Public release date: 3-Oct-2013 [ Print | E-mail Share ] [ Close Window ] Contact: Christian Ruffvchristian.ruff@econ.uzh.ch 41-446-345-067University of Zurich How does the human brain control compliance with social norms? Prefrontal cortex controls norm behavior For the study, 63 participants took part in an experiment in which they received money and were asked to decide how much of it they wanted to share with an anonymous partner. By means of a technique called "transcranial direct current stimulation," which sends weak and painless electric currents through the skull, the excitability of specific brain regions can be modulated. Brain stimulation affects normative behavior When neural activity in this part of the brain was increased via stimulation, the participants' followed the fairness norm more strongly when sanctions were threatened, but their voluntary norm compliance in the absence of possible punishments decreased. Literature: Christian C. Contact: Prof. Prof. [ Print | E-mail

Social Intelligence Competencies Predict Transformational Leadership Style and Effectiveness Low dose psychedelics increase neurogenesis, help mice unlearn fear | Psychedelic Frontier A new study of mice published in Experimental Brain Research shows that low doses (but not high doses) of psychedelics increase the rate of neuron creation in the hippocampus, and help the mice to rapidly unlearn conditioned fear responses. From the abstract (paragraph breaks added for readability): Drugs that modulate serotonin (5-HT) synaptic concentrations impact neurogenesis and hippocampal (HPC)-dependent learning. The primary objective is to determine the extent to which psilocybin (PSOP) modulates neurogenesis and thereby affects acquisition and extinction of HPC-dependent trace fear conditioning.PSOP, the 5-HT2A agonist 25I-NBMeO and the 5-HT2A/Cantagonist ketanserin were administered via an acute intraperitoneal injection to mice. This will not surprise anybody who has been able to process deep-seated fears and insecurities with the help of a psychedelic. As head researcher Dr. With the right therapeutic approach, psychedelics allow us to rewire our brains in a positive manner.

The 5 Ways to Spot an Emotionally Intelligent Leader Research has shown us that more than 90 percent of top leadership performers have a high amount of emotional intelligence, or EI. The higher up the ladder that leaders are, the more people they impact and their EI becomes increasingly important. The person at the top sets the atmosphere that permeates the organization, including the emotional temperature. Not only does a leader with low emotional intelligence have a negative impact on employee morale, it directly impacts staff retention. Here are five ways to spot an emotionally intelligent leader: 1. Insecure leaders that demonstrate low EI become defensive and take it personally whenever they encounter anything that appears to them as criticism and a challenge to their authority. A secure leader with a healthy dose of emotional intelligence strives to listen, understand and find out what is behind behaviors and actions of those they are responsible for managing. 2. 3. 4. 5.

Herpes Medication Produces "Walking Corpse Syndrome" Pharmacologists have discovered a mechanism that triggers Cotard’s syndrome – the mysterious condition that leaves people feeling like they, or parts of their body, no longer exist. With the ability to switch the so-called walking corpse syndrome on and off comes the prospect of new insights into consciousness.Acyclovir – also known by the brand name Zovirax – is a common drug used to treat cold sores and other herpes infections. However, about 1 per cent of people who take the drug orally or intravenously experience some psychiatric side effects, including Cotard’s. These occur mainly in people who have renal failure.One woman with renal failure began using acyclovir to treat shingles. She ran into a hospital screaming.

Related:
Related:  Neuroscience & Consciousness   -  How to Be an Emotionally & Socially Intelligent Leader