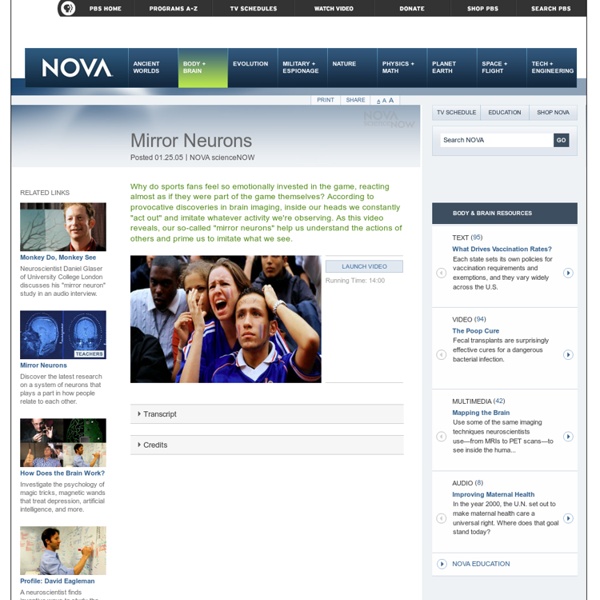 Mirror Neurons PBS air date: January 25, 2005 ROBERT KRULWICH: Hello again. Gaze into a mirror, and what do you see? Well, I see my face, of course. But in my face I see moods, I see shifts of feeling. We humans are really good at reading faces and bodies. Ask yourself, "Why do people get so involved, so deeply, deeply involved, with such anguish, such pain, such nail biting tension over football?" COMMENTATOR: The Cleveland Browns are gambling on defense. ROBERT KRULWICH: Why are we such suckers for sports? Well, as it happens, scientists have an explanation for this strange ability to connect. DANIEL GLASER: It had never been found on a cellular level before. ROBERT KRULWICH: A set of brain cells, found on either side of the head, among all the billions of long branching cells in our brain, these so-called "mirror neurons," have surprising power. (NEURON FIRING): Clack, clack, clack. ROBERT KRULWICH: ...whenever the monkey would grab for a peanut. ROBERT KRULWICH: ...the neuron would fire.

The empathy deficit Young Americans today live in a world of endless connections and up-to-the-minute information on one another, constantly updating friends, loved ones, and total strangers — “Quiz tomorrow...gotta study!” — about the minutiae of their young, wired lives. And there are signs that Generation Wi-Fi is also interested in connecting with people, like, face-to-face, in person. The percentage of high school seniors who volunteer has been rising for two decades. But new research suggests that behind all this communication and connectedness, something is missing.

5 Strategies to Read People’s Emotional Energy Emotions are a stunning expression of our energy, the “vibe” we give off. We register these with intuition. Some people feel good to be around; they improve your mood and vitality. Others are draining; you instinctively want to get away. Megan Tschannen-Moran's Web Site Dr. Megan Tschannen-Moran is a professor of educational leadership at the College of William and Mary School of Education. She prepares prospective school leaders for K-12 building-level and central office positions in the Educational Policy, Planning, and Leadership program. Her research focuses on relationships of trust in school settings and how these are related to important outcomes such as the collective efficacy beliefs of a school faculty, teacher professionalism, and student achievement.

Are You Suffering From Empathy Deficit Disorder? It's possible that you're among the large number of people who suffer from EDD. No, that isn't a typo -- I don't mean ADD or ED. It's EDD, which stands for " Empathy Deficit Disorder." Emotion Expression - Emotion Faces and Facial Analysis Neither emotion nor its expression are concepts universally embraced by psychologists. The term "expression" implies the existence of something that is expressed. Some psychologists deny that there is really any specific organic state that corresponds to our naive ideas about human emotions; thus, its expression is a non sequitur.

Thinking, Fast and Slow — By Daniel Kahneman — Book Review Human irrationality is Kahneman’s great theme. There are essentially three phases to his career. In the first, he and Tversky did a series of ingenious experiments that revealed twenty or so “cognitive biases” — unconscious errors of reasoning that distort our judgment of the world. Typical of these is the “anchoring effect”: our tendency to be influenced by irrelevant numbers that we happen to be exposed to. (In one experiment, for instance, experienced German judges were inclined to give a shoplifter a longer sentence if they had just rolled a pair of dice loaded to give a high number.) In the second phase, Kahneman and Tversky showed that people making decisions under uncertain conditions do not behave in the way that economic models have traditionally assumed; they do not “maximize utility.”

Scientists prove it really is a thin line between love and hate - Science - News Scientists studying the physical nature of hate have found that some of the nervous circuits in the brain responsible for it are the same as those that are used during the feeling of romantic love – although love and hate appear to be polar opposites. A study using a brain scanner to investigate the neural circuits that become active when people look at a photograph of someone they say they hate has found that the "hate circuit" shares something in common with the love circuit. The findings could explain why both hate and romantic love can result in similar acts of extreme behaviour – both heroic and evil – said Professor Semir Zeki of University College London, who led the study published in the on-line journal PloS ONE. "Hate is often considered to be an evil passion that should, in a better world, be tamed, controlled and eradicated. Yet to the biologist, hate is a passion that is of equal interest to love," Professor Zeki said.

Managers Need to Make Time for Face Time Alan Buckelew, chief operations officer of Carnival Corp., moved to Shanghai last September so he could help the world’s biggest cruise-ship company expand in China. He still supervises five executives at its Miami headquarters. A heavy workload forced Mr. Buckelew to conduct year-end performance reviews for three of those deputies via videoconferencebut he wasn’t happy about it. “A review is probably the one time when you want to be physically present,” Mr. Buckelew says.

Four Ways to Give Good Feedback When effectively administered, feedback is a powerful way to build knowledge and skills, increase skills, increase motivation, and develop reflective habits of mind in students and employees. Too often, however, the feedback we give (and get) is ineffectual or even counterproductive. Here, four ways to offer feedback that really makes a difference, drawn from research in psychology and cognitive science: 1. Empathy Circles - Lidewij Niezink, PhD Empathy Circles: Building a Culture of Empathy In 2012 I joined forces with Edwin Rutsch of the Center for Building a Culture of Empathy and Compassion. Edwin is building an Empathy Movement and together we have developed Empathy Circles as a hands-on instrument in building a culture of empathy. Most materials are available through this site.