10 facts about infidelity, as divulged by Helen Fisher 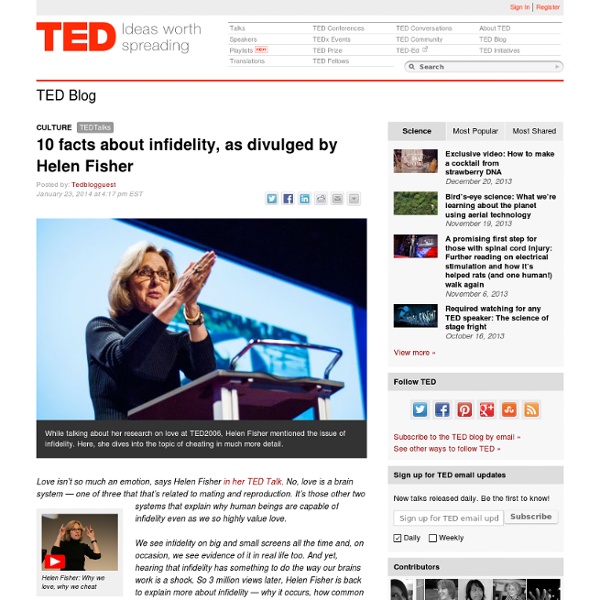 While talking about her research on love at TED2006, Helen Fisher mentioned the issue of infidelity. Here, she dives into the topic of cheating in much more detail. Photo: Robert Leslie Love isn’t so much an emotion, says Helen Fisher in her TED Talk. No, love is a brain system — one of three that that’s related to mating and reproduction. Helen Fisher: Why we love, why we cheatIt’s those other two systems that explain why human beings are capable of infidelity even as we so highly value love. We see infidelity on big and small screens all the time and, on occasion, we see evidence of it in real life too. 1. Further reading: Anatomy of Love, by Helen FisherThe Marriage-Go-Round, by Andrew J. 2. 3. Why We Love, by Helen Fisher 4. Nisa: The Life and Words of a ! 5. “Justifications for extramarital relationships: The association between attitudes, behaviors, and gender,” by Shirley Glass and Thomas Wright in the Journal of Sex Research 6. 7. 8. 9. 10. Anatomy of Love, by Helen Fisher Why Him?

Russian Scientist Photographs the Soul Leaving the Body, With a Special Camera Does the soul exists? According to Dr. Konstantin G. Korotkov, a Russian scientist, the soul does exist and he has evidence showing that there is something beyond death. You can read more about his discoveries at Korotkov.org. The idea that there is a soul has been part of the human culture for millennia. I believe one day someone will invent a technology that can prove the existence of the soul. “The amazing moment of a soul separating from the body has reportedly been captured by a Russian researcher.The Russian scientist claims to have achieved the impossible by photographing a soul that leaves the body of a dying person. The following short video does a great job of trying to convince you that the soul is real. However, I do sense that this video contains some misleading information about the soul. By PL Chang, Energy Fanatics;

The policy world and academia offer widely different opportunities for early career researchers. The research career offers a variety of opportunities across sectors. Rachel Glennerster weighs up the differences between the policy world and academia for early career researchers looking at their options. Whilst both may be intellectually challenging environments, the reward structures, collaborative potential and research scope are substantially different and personal preferences of these variations may play a big role in deciding which one would be preferable. As someone who worked as a policy economist for many years (at the UK Treasury and the IMF) before going into research, I am often asked for advice from those trying to decide whether to go into a career in policy or academia. Credit: IMF (public domain) I should stress that I am not talking about doing a research job at a policy institution (like being in the research department at the World Bank or a federal reserve bank). The questions that are worked on and the reward structure are also very different in each field.

Looking At Tears Under A Microscope Reveals A Shocking Fact. Share on Facebook One day Rose-Lynn Fisher wondered if her tears of grief would look different from her tears of joy, so she began to explore them up close under a microscope. She studied 100 different tears and found that basal tears (the ones that our body produces to lubricate our eyes) are drastically different from the tears that happen when we are chopping onions. The tears that come about from hard laughter aren’t even close to the tears of sorrow. Like a drop of ocean water each tiny tear drop carries a microcosm of human experience. Tears from laughing until crying Rose-Lynn Fisher Tears of change Tears of grief Tears from onions Joseph Stromberg of the Smithsonian’s Collage of Arts and Sciences explained that there are three major types of tears: basal, reflex, and psychic (triggered by emotions). Basal tears Tears of timeless reunion Tears of ending and beginning Tears of momentum, redirected Tears of release Tears of possibility and hope Tears of elation at a liminal moment

Nonopticon: Hide in plain sight How Emotionally Intelligent Are You? Here's How To Tell What makes some people more successful in work and life than others? IQ and work ethic are important, but they don't tell the whole story. Our emotional intelligence -- the way we manage emotions, both our own and those of others -- can play a critical role in determining our happiness and success. Plato said that all learning has some emotional basis, and he may be right. The way we interact with and regulate our emotions has repercussions in nearly every aspect of our lives. "What having emotional intelligence looks like is that you're confident, good at working towards your goals, adaptable and flexible. The five components of emotional intelligence, as defined by Goleman, are self-awareness, self-regulation, motivation, social skills and empathy. Not sure how emotionally intelligent you are? 1. Do you love meeting new people, and naturally tend to ask lots of questions after you've been introduced to someone? Being curious about others is also a way to cultivate empathy. 2. 3. 4.

The Science of Emotion in Marketing: How We Decide What to Share and Whom to Trust Every day it seems like we feel hundreds of different emotions – each nuanced and specific to the physical and social situations we find ourselves in. According to science, it’s not that complicated by a long shot. A new study says we’re really only capable of four “basic” emotions: happy, sad, afraid/surprised, and angry/disgusted. But much like the “mother sauces” of cooking allow you to make pretty much any kind of food under the sun, these four “mother emotions” meld together in myriad ways in our brains to create our layered emotional stews. Robert Plutchik’s famous “wheel of emotions” shows just some of the well known emotional layers. In this post we’ll take a close look at each of the four emotions, how they form in the brain and the way they can motivate us to surprising actions. Happiness makes us want to share Psychoanalyst Donald Winnicott discovered that our first emotional action in life is to respond to our mother’s smile with a smile of our own. P.S.

Mamamia Meditation You’ll need a yoga mat, some pillows, a towel and some lube. You’ll need someone who is willing to get their hands dirty lube-y. You won’t need too much time. And unlike in regular meditation, you are unlikely to fall asleep in the middle of it. That’s because it is orgasmic meditation and the object in focus is – drumroll, please – your clitoris. Orgasmic Meditation (OM for short) is based on the idea that women are generally deprived of orgasm in their lives – and by practicing OM, they will be restored to their natural human state – “the state of connection”. Importantly, OM is not to be confused with masturbation. Okay, enough giggling and funny-face-pulling, because it’s time to get down to the facts. A still from a how-to Orgasmic Meditation video The Stroker sits up while you lay spreadeagled, sans-pants, across their lap. They start by describing what they see – the colour, the shape, the texture. You probably have questions. Isn’t this just foreplay? This is not foreplay.

Why Do We Laugh? Why do we LOL? Is ROFLing an innate piece of human behavior? Does our tendency to LMAO say something about us—something that separates us from the non-kekekeing species who share our planet? For Scienceline, William Herkewitz explores the evolutionary history of laughter, a story that shows us that maybe we’re not quite so unique as we’d like to think. It’s not just that we laugh at funny things. Herkewitz finds that various theories abound, but that the current “best guess” says that humans laugh to tell other humans not to get too fussed over something that could otherwise be regarded as scary or dangerous. If you’re an ancestral human, says Ramachandran, and you come across what you think is a dangerous snake but actually turns out to be a stick, you’re relieved and you laugh. People also laugh to show pleasure, to bond with other members of the group. Our laughter, the Tommy gun staccato sound of “ha-ha-ha,” is unique in the animal kingdom. Dogs, too, laugh in their own way.

Emotion in Marketing: How Our Brains Decide What's Shareable 13.2K Flares Filament.io 13.2K Flares × Every day it seems like we feel hundreds of different emotions – each nuanced and specific to the physical and social situations we find ourselves in. According to science, it’s not that complicated by a long shot. A new study says we’re really only capable of four “basic” emotions: happy, sad, afraid/surprised, and angry/disgusted. But much like the “mother sauces” of cooking allow you to make pretty much any kind of food under the sun, these four “mother emotions” meld together in myriad ways in our brains to create our layered emotional stews. Robert Plutchik’s famous “wheel of emotions” shows just some of the well known emotional layers. In this post we’ll take a close look at each of the four emotions, how they form in the brain and the way they can motivate us to surprising actions. Happiness makes us want to share The left pre-frontal cortex of the brain is where happiness traits like optimism and resilience live. P.S.

How Gmail Has Evolved Over the Years Gmail turned 9 this month, and before we know it, it will be heading off to middle school. It's grown up fast. In fact, it knows 57 languages now — the latest one being Cherokee. Google's email platform has greatly evolved since its inception, with a lot of user feedback taken into account. "Gmail was inspired by one user’s feedback that she was tired of struggling to find emails buried deep in her inbox," the company said on its official blog. The company posted on Wednesday an infographic outlining how it's changed in time. We almost forgot we had to wait a whole two years for GChat. For a full look at how the platform has evolved, check out the infographic below (click to enlarge) and let us know in the comments what you'd like to see from Gmail in the future. Mashable composite, images via iStockphoto, kemie, and logo courtesy of Google