How Should We Live: History’s Forgotten Wisdom on Love, Time, Family, Empathy, and Other Aspects of the Art of Living 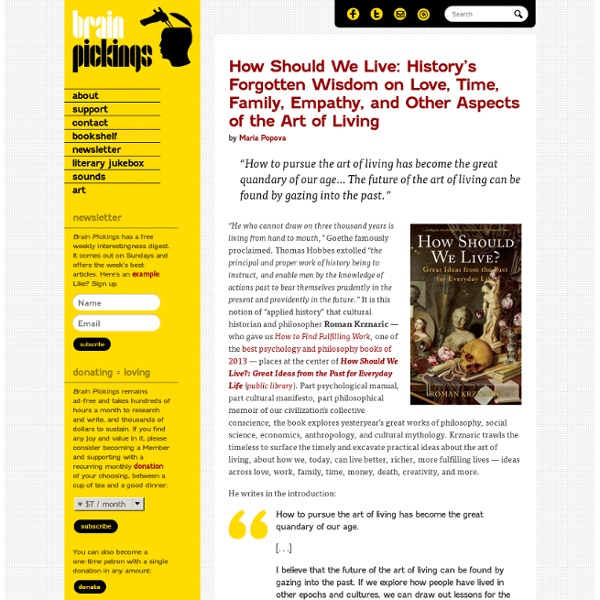 The Science of Love: How Positivity Resonance Shapes the Way We Connect by Maria Popova The neurobiology of how the warmest emotion blurs the boundaries by you and not-you. We kick-started the year with some of history’s most beautiful definitions of love. But timeless as their words might be, the poets and the philosophers have a way of escaping into the comfortable detachment of the abstract and the metaphysical, leaving open the question of what love really is on an unglamorously physical, bodily, neurobiological level — and how that might shape our experience of those lofty abstractions. She begins with a definition that parallels Dorion Sagan’s scientific meditation on sex: First and foremost, love is an emotion, a momentary state that arises to infuse your mind and body alike. Fredrickson zooms in on three key neurobiological players in the game of love — your brain, your levels of the hormone oxytocin, and your vagus nerve, which connects your brain to the rest of your body — and examines their interplay as the core mechanism of love, summing up:

How to Care for Introverts (in 12 easy steps) (Via Tumblr) I say this often but I’m pretty sure I was a cat in a previous life. If I believed in reincarnation , I’d be purring right now. You know how there are two kinds of people in this world: dog people and cat people. People who need to be alone often, who are jealous of their space and privacy, who purr unexpectedly or stop purring for no apparent reason (who knows, maybe they just spotted a mouse); who never come when you call them but expect you to answer immediately when they call you. On the wiser side of town, they look like they’ve learned to become friends with their solitude . I could raise my hand here and say “me, me”, but the older I get, the less black & white I see the world, but more like a faded sepia. (Screenshot Amélie via YouTube) Overall though, I think there’s a cat in each one of us as much as there’s a dog. ~ Criss Jami (Via Questionably Late Tumblr) {Based on Linda Kreger Silverman’s On Introversion.}

Ways of Keeping a Prayer Journal :: Deeper Devotion Question “Can you suggest ways of keeping a prayer journal?” —Harry Answer First of all, I have to say I think keeping a prayer journal is a great way to spend time with God. I personally keep a daily prayer journal and journal most of my prayers during my morning quiet times. Let me give you my simple method for prayer journaling and then I’ll talk about other ideas you might try. That’s just my method. Media If you like to write by hand, then a notebook may be great for you. If you’d rather type, try keeping a journal in Microsoft Word or just a text editor like Notepad. If you want to go a step further, you could also try keeping your prayer journal online. Methods When you are praying for specific people, try getting a photo of each and putting them in your journal. Prayer is intended to be a conversation. I find that God often teaches me through a “theme of the day” or “theme of the month.” Final thoughts

Kurt Vonnegut on Reading, Boredom, Belonging, and Hate by Maria Popova “Hate, in the long run, is about as nourishing as cyanide.” What makes the commencement address such a singular pinnacle of the communication arts is that, in an era where religion is increasingly being displaced by culture and secular thought, it offers a secular version of the sermon — a packet of guidance on how to be a good human being and lead a good life. It is also one of the few cultural contexts in which a patronizing attitude, in the original sense of the term, is not only acceptable but desired — after all, the very notion of the graduation speech calls for a patronly father figure or matronly mother figure to get up at the podium and impart to young people hard-earned, experience-tested wisdom on how to live well. And implicit to that is an automatic disarmament of our otherwise unflinching culturally conditioned cynicism — which is also why the best commencement addresses are timeless and ageless and sing to us beyond the boundaries of our own life-stage.

Letters to a Young Artist: Anna Deavere Smith on Confidence and What Self-Esteem Really Means by Maria Popova “Real self-esteem is an integration of an inner value with things in the world around you.” “Character — the willingness to accept responsibility for one’s own life — is the source from which self-respect springs,” Joan Didion wrote in her timeless meditation on self-respect. That’s what celebrated artist, actor, playwright, and educator Anna Deavere Smith explores in a section of the altogether fantastic Letters to a Young Artist: Straight-up Advice on Making a Life in the Arts for Actors, Performers, Writers, and Artists of Every Kind (public library) — a compendium of counsel addressed to an imaginary young artist, titled after the famous Rilke tome, in which Smith addresses with equal parts pragmatic idealism and opinionated optimism those of us seeking change and championing social change, as well as those who see themselves as “one of the guardians of the human spirit.” Art should take what is complex and render it simply. Confidence is a static state. Thanks, Wendy

How to Love an Empath get elephant's newsletter I’ve battled my bleeding heart for my entire life. “Mommy what’s wrong?” My back was turned. I don’t lie to my children. So I replied, “Mommy’s feelings are hurt today honey. “I know how that is Mommy, my feelings are hurt all of the time.” She paused, wiping her warm little hands up and down my back, “Mommy, it’s so hard being a nice person.” I never thought of it this way, but it’s true. At the tender age of five, my daughter has already learned this lesson. We feel more than we think. This is a blessing and a curse. I’ve battled my bleeding heart for my entire life. I’ve tried to fit the mold for long enough, to not let other people affect me. Every day, I interact with others and I feel them without words, so does my daughter, she did it tonight and she was right, I was sad. How do I love her (an empath)? (This applies to children, friends, parents and romantic partnerships). It’s simple; I honor how she feels and I reassure her that her feelings are important.

philipyancey America’s Bicentennial Poem This is Part 12 of The Universal Emancipation Proclamation : All Art is a gift of the Holy Spirit. When this light shines through the mind of a musician, it manifests itself in beautiful harmonies. During America’s Bicentennial celebration of the Declaration of Independence in 1976, Baha’i poet Robert Hayden served as Consultant in Poetry to the Library of Congress. American Journal Robert Hayden Robert E. here among them the americans this baffling multi people extremes and variegations their noise restlessness their almost frightening energy how best describe these aliens in my reports to The Counselors disguise myself in order to study them unobserved adapting their varied pigmentations white black red brown yellow the imprecise and strangering distinctions by which they live by which they justify their cruelties to one another charming savages enlightened primitives brash new comers lately sprung up in our galaxy how describe them do they indeed know what or who for their importance and identity

What Makes People Compelling by Maria Popova The art of mastering the vital osmosis of two conflicting qualities. What makes a winning personality? How can some people walk into a room and instantly entrance everyone into a state of amicable submission? What makes someone like Carl Sagan at once so beloved and so respected? That’s precisely what communications strategists John Neffinger and Matthew Kohut, who met while working at Harvard, explore in Compelling People: The Hidden Qualities That Make Us Influential (public library) — a synthesis of six years’ worth of their research and experience of working with Nobel Prize winners, CEOs, media personalities, politicians, and NASA commanders. It turns out that when we assess someone’s personality, we pay heed to two main criteria: “strength,” which as a personal quality is a measure of how well a person can will the world into obedience, and “warmth,” which induces a sense of belonging or being cared for, often through shared interests or concerns. Donating = Loving

The Benefits of Talking about Thoughts with Tots Every parent knows that toddlers are strange and inscrutable creatures. They are capricious and contradictory, particularly when trying to interact with other people. My two-year-old daughter is no exception. One moment she is worrying about a crying baby. The next, she is snatching away her friend’s toy and shouting, “Mine!” For decades, scientists believed that theory of mind – the ability to reason about other people’s thoughts and emotions – doesn’t begin to mature until children reach the age of three or four. Most two- and three-year-olds answer that Sally would look in the box because that’s where they know the ball is. While children’s performance on the false-belief task initially led scientists to conclude that theory of mind develops around age four, that assumption has since been overturned. While children typically master the standard false-belief task around the age of four, the timing can range from three to nearly six years of age, depending on the child.