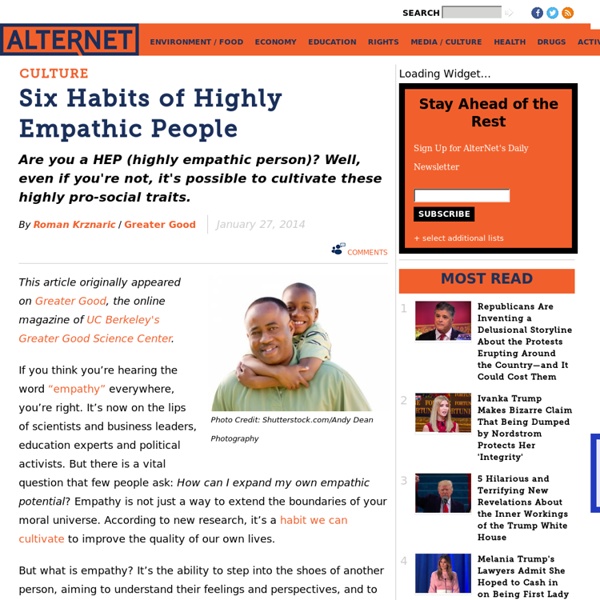 Photo Credit: Shutterstock.com/Andy Dean Photography This article originally appeared on Greater Good, the online magazine of UC Berkeley's Greater Good Science Center. If you think you’re hearing the word “empathy” everywhere, you’re right. It’s now on the lips of scientists and business leaders, education experts and political activists. But there is a vital question that few people ask: How can I expand my own empathic potential? But what is empathy? The big buzz about empathy stems from a revolutionary shift in the science of how we understand human nature. Over the last decade, neuroscientists have identified a 10-section “empathy circuit” in our brains which, if damaged, can curtail our ability to understand what other people are feeling. But empathy doesn’t stop developing in childhood. Habit 1: Cultivate Curiosity about Strangers Highly empathic people (HEPs) have an insatiable curiosity about strangers. Habit 2: Challenge Prejudices and Discover Commonalities Related:  *

Six Habits of Highly Empathic People If you think you’re hearing the word “empathy” everywhere, you’re right. It’s now on the lips of scientists and business leaders, education experts and political activists. But there is a vital question that few people ask: How can I expand my own empathic potential? Empathy is not just a way to extend the boundaries of your moral universe. According to new research, it’s a habit we can cultivate to improve the quality of our own lives. But what is empathy? The big buzz about empathy stems from a revolutionary shift in the science of how we understand human nature. Over the last decade, neuroscientists have identified a 10-section “empathy circuit” in our brains which, if damaged, can curtail our ability to understand what other people are feeling. But empathy doesn’t stop developing in childhood. Habit 1: Cultivate curiosity about strangers Highly empathic people (HEPs) have an insatiable curiosity about strangers. Habit 2: Challenge prejudices and discover commonalities

How to Listen Between the Lines: Anna Deavere Smith on the Art of Listening in a Culture of Speaking by Maria Popova “Some people use language as a mask. And some want to create designed language that appears to reveal them but does not.” In his exquisite taxonomy of the nine kinds of silence, Paul Goodman included “the silence of listening to another speak, catching the drift and helping him be clear.” Half a century after John Cage demonstrated that we only hear what we listen for, Smith set out to explore her intuition that in order to develop a voice, one has to “develop an ear”; that words can be as much “the most important doorway into the soul of a person” as “the doorway into the soul of a culture.” Smith writes: The creation of language is the creation of a fiction. In a sentiment that calls to mind Adrienne Rich’s crystalline conception of the liar as someone who loses sight of “the possibilities that exist between two people, or among a group of people,” Smith adds: Our ability to create reality, by creating fictions with language, should not be abused. Donating = Loving

Wanting and Liking: Observations from the Neuroscience and Psychology Laboratory Married Women, Flirting & Loyalty | girlwithadragonflytattoo About two years ago, I wrote a post called How to Turn a Guy Down that was mostly for single women not interested in the man who was asking, or for women already taken in a relationship (or marriage). It told of my transformation from a 14 year old volleyball player who rejected an older athlete at a summer day camp and thought herself a man-eater, to a 27 yr old woman who realized men have feelings and should be treated with kindness and respect. After the camp, our parents would pick us up, mine always worked till 5pm so I’d wait outside the immense Gymnasium watching for my mom’s car. They had other sports camps there, and one day a basketball player that had been eyeing me came over and flirted. I’m naturally kind so I was polite, but I had no intention of making him a boyfriend, or even a friend (I wasn’t nice to strangers). The difference between this encounter, and one that happened 13 years later: You men have it hard. Why not flirt a little? But it isn’t. Like this: Like Loading...

untitled 20 Daily habits Of Highly Organized People We all have that one person at work or school who is effortlessly organized. They never seem to miss any deadlines, always finish their work with time to spare, and always know where they can find what they are looking for. And let’s face it: you are obviously jealous of them. But why? Why be jealous when you can actually learn from them and be the same as them? They do seem to be on the right track with life, don’t they? Being organized isn’t just something you adapt to. Without further ado, let’s get you introduced to the 20 daily habits of highly organized people. 1. Here’s the deal: it doesn’t matter at what time of the day you check your inbox. 2. If you have a pile of mail, then dedicating some of your time to sort these bad boys out on a daily basis, just like your emails, won’t hurt. 3. There should absolutely be no space at all for clutter on your desk. 4. Staying organized isn’t all about being uptight. 5. Each and every thing is supposed to go in its rightful place. 6. 7. 8.

3 Scientifically Proven Ways To Increase Intimacy Love can be hard to define. We know when we feel it. We also know the difference between platonic and romantic love, but often we aren't quite sure why it is that we fall in love. There are many theories about how love comes about. For instance, attachment theory explains that we fall in love with those whose attachment styles complement our own. By contrast, Imago theory explains that we fall in love with those who will help us to evolve and grow toward healing our childhood wounds. 1. Often, in the beginning of a relationship, we self-disclose for the purpose of getting to know someone, and to be seen by an other. In an experiment with strangers, Arthur Aron and his colleagues instructed participants to ask a set of questions to one another to test if self-disclosure could create an instant bond. For what in your life do you feel most grateful? Sometimes, in a more established relationship, it can feel more risky to become vulnerable. 2. 3. Photo Credit: Shutterstock

untitled 6 Things You Can Do When You Lack Discipline Post written by Leo Babauta. Follow me on Twitter. One of the biggest problems people face is the lack of discipline — they have goals or habits they want to achieve, but lack that discipline needed to stick with it. Then we beat ourselves up about it. We feel crappy because we can’t stick with it. And that leads to more failure, because we’re forming a mindset that we don’t have the necessary discipline. Here’s what to do when you face a situation like this: 1. 2. 3. 4. 5. 6. —If you liked this article, please share it on del.icio.us, StumbleUpon or Digg.

Partner In Crime: 8 Voids In Your Life The Person You Marry Should Fill There are risks when your happiness begins to rely on the presence and happiness of another — there's no denying that. At the same time, our happiness is always reliant on others. Concentrating that need onto one individual does increase the risks, but at the same time also allows for a more intoxicating experience. People often say you should do your best to never rely on others, but that's silly. It's not possible. We all rely on other people. We've relied on other people since before we were born and will continue to do so until after our death; we sure as hell can't bury ourselves. Our happiness must rely on others as well, as no individual could spend a life of solitude and come out the other side sane — forget happy. Life allows for many voids, but meeting the right person is often the only way of filling them. The void of not having someone in your life who truly knows you — a best friend. Some of us have best friends — others don't. The void of not having anyone to call family.