Brené Brown on Vulnerability, Human Connection, and the Difference Between Empathy and Sympathy, Animated 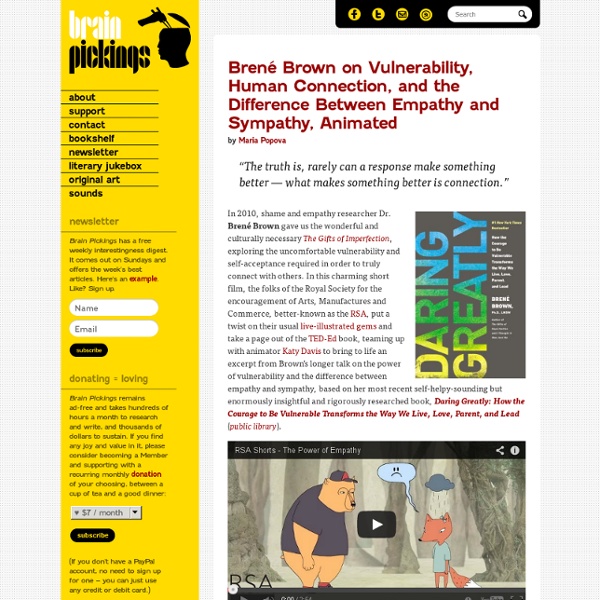 The science of love: How "positivity resonance" shapes the way we connect by Maria Popova The neurobiology of how the warmest emotion blurs the boundaries by you and not-you. We kick-started the year with some of history’s most beautiful definitions of love. She begins with a definition that parallels Dorion Sagan’s scientific meditation on sex: First and foremost, love is an emotion, a momentary state that arises to infuse your mind and body alike. Fredrickson zooms in on three key neurobiological players in the game of love — your brain, your levels of the hormone oxytocin, and your vagus nerve, which connects your brain to the rest of your body — and examines their interplay as the core mechanism of love, summing up: Love is a momentary upwelling of three tightly interwoven events: first, a sharing of one or more positive emotions between you and another; second, a synchrony between your and the other person’s biochemistry and behaviors; and third, a reflected motive to invest in each other’s well-being that brings mutual care. This is no ordinary moment.

note note note The “I” of the Beholder: What Is the Self? by Maria Popova “The fate of the world depends on the Selves of human beings.” “I change every day, change my patterns, my concepts, my interpretations,” Anaïs Nin wrote to Harper’s Bazaar editor Leo Lerman in history’s most gracious turn-down of a major magazine profile, “I am a series of moods and sensations. I play a thousand roles.” And yet despite how much science may disprove it and philosophy may debunk it, most of us cling to the notion of the permanent self with unparalleled zest. In her seminal book The “I” of the Beholder: A Guided Journey to the Essence of a Child (public library), education pioneer and Roeper School co-founder Annemarie Roeper considers the origin and nature of identity and of the self as it relates to developmental psychology and our formative years. Roeper writes in the introduction: [We have] a sense of the mystery of life, the mystery of the universe that surrounds us, and the mystery that is within us. Stop judging me, evaluating me, categorizing me.

Empathy: A Short Conceptual History and An Anthropological Question Savage Minds welcomes guest blogger LINDSAY A BELL In my first post, I proposed that anthropology might be particularly well suited to thinking through the concept of empathy. In North America, “empathy” has come to be a prominent term across the caring arts. Last weeks’ commentators aptly pointed out that “empathy” has become a gloss for broader concerns. In 1909, Edward Titchener coined the English “empathy” while working on the psychology of perception at Cornell. The 19th century German psychologist Theodor Lipps provided the most thorough account of Einfühlung. The concept of Einfühlung has influenced thought on a variety of intellectual problems, in a variety of contexts, but in most cases has not inspired the kind of grand claims we see in contemporary talk about empathy. Empathy’s Clinical Crossover Grand aspirations for empathy seem tied to more recent developments in Anglo-American psychology. We are now closer to the views of empathy in Brown, Obama, and Rifkin. Like this:

The Science of Why Our Brains Are Wired to Connect by Maria Popova “The self is more of a superhighway for social influence than it is the impenetrable private fortress we believe it to be.” “Without the sense of fellowship with men of like mind,” Einstein wrote, “life would have seemed to me empty.” It is perhaps unsurprising that the iconic physicist, celebrated as “the quintessential modern genius,” intuited something fundamental about the inner workings of the human mind and soul long before science itself had attempted to concretize it with empirical evidence. Now, it has: In Social: Why Our Brains Are Wired to Connect (public library), neuroscientist Matthew D. Lieberman, director of UCLA’s Social Cognitive Neuroscience lab, sets out to “get clear about ‘who we are’ as social creatures and to reveal how a more accurate understanding of our social nature can improve our lives and our society. Our sociality is woven into a series of bets that evolution has laid down again and again throughout mammalian history. Donating = Loving

Meanwhile: An Illustrated Love Letter to the Living Fabric of a City and Our Shared Human Longing to Be Understood by Maria Popova A tender reminder that however vast our differences, we are bonded by the yearning to feel seen for who we are. I’ve written before that every city needs a love letter. Like a modern-day Margaret Mead armed with ink and watercolor, not a critic or commentator but an observer and amplifier of voice, MacNaughton plunges into the living fabric of the city with equal parts curiosity and compassion, gentleness and generosity, wit and wisdom, and emerges with a dimensional portrait painted with honesty, humor, and humility. Beneath the individual stories — of the bus driver, of the hipsters, of the old men in Chinatown, of the librarian, of the street preacher — lies a glimpse of our shared humanity, those most vulnerable and earnest parts of the human soul that we often overlook and dismiss as we reduce people to their demographic and psychographic variables, be those race or gender or socioeconomic status or subcultural identification. Donating = Loving Share on Tumblr

Unleashing Empathy: How Teachers Transform Classrooms With Emotional Learning by Lennon Flowers The secret to learning self-awareness, cooperation, and other “social and emotional learning” skills lies in experience, not in workbooks and rote classroom exercises. posted Apr 04, 2014 Photo by Studio One/Shutterstock. Each week, in hundreds of classrooms around the world, elementary school students sit cross-legged in a circle, surrounding a baby clad in a onesie with the word “Teacher” on the front. Over the course of a year, students learn to label the baby’s feelings and to interpret his or her actions. They’re in a program called Roots of Empathy, part of a growing education trend broadly referred to as “social and emotional learning” (SEL), where children—and often their teachers and parents—learn to manage emotions, and to develop the skills required to establish relationships, de-escalate and resolve conflict, and effectively collaborate with others. Mary Gordon is Roots of Empathy’s founder and president. Together with a team of educators, Dr. More Stories

Amanda Palmer on the Art of Asking and the Shared Dignity of Giving and Receiving by Maria Popova “When we really see each other, we want to help each other.” “It would be a terrible calamity,” Henry Miller wrote in his meditation on the beautiful osmosis between giving and receiving, “for the world if we eliminated the beggar. The beggar is just as important in the scheme of things as the giver. If begging were ever eliminated God help us if there should no longer be a need to appeal to some other human being, to make him give of his riches.” Last week, I had the pleasure of spending some time with the wonderful Amanda Palmer who, besides being an extraordinarily talented musician, is also a fellow champion of open culture and believer in making good work freely available, trusting that those who find value in it will support it accordingly. Through the very act of asking people, I connected with them. Photograph: James Duncan Davidson for TED Donating = Loving Bringing you (ad-free) Brain Pickings takes hundreds of hours each month. Share on Tumblr

5 Habits of Highly Compassionate Men Photo Credit: MelvinDyson / Shutterstock.com This article originally appeared on Greater Good, the online magazine of UC Berkeley's Greater Good Science Center. I remember being a very compassionate child. While watching "The Little House on the Prairie," I cried my eyes out when Laura couldn’t give Pa a Christmas gift. Although I was what therapists call “high functioning,” my lack of compassion was like a cancer that poisoned my friendships, relationships, business affairs, and life. I knew I had to change. Convinced that I had found an essential ingredient to a happy and peaceful life, I started to interview scientific and spiritual experts on compassion, trying to find out what made a compassionate man. From these interviews and research, I compiled a list of what makes a compassionate man. 1. Most events I attend that discuss compassion are predominantly attended by women. Dr. 2. All of the compassionate men seemed to have role models that supported their compassion instinct. 3. Dr.

Einstein on Kindness, Our Shared Existence, and Life’s Highest Ideals by Maria Popova “Without the sense of fellowship with men of like mind… life would have seemed to me empty.” In times of turmoil, I often turn to one of my existential pillars of comfort: Albert Einstein’s Ideas and Opinions — the definitive collection of the great thinker’s essays on everything from science and religion to government to human nature, gathered under the supervision of Einstein himself. It’s been a challenging week, one that’s reminded me with merciless acuity the value of kindness and compassion, so I’ve once again turned to Einstein’s timeless “ideas and opinions” on this spectrum of subjects. On the ties of sympathy: How strange is the lot of us mortals! On public opinion, or what Paul Graham might call prestige: One becomes sharply aware, but without regret, of the limits of mutual understanding and consonance with other people. On our interconnectedness, interdependency, and shared existence: On good and evil, creative bravery, and human value: On life’s highest ideals:

Building Stories: Chris Ware Explores the Architecture of Being Human by Maria Popova What the inner life of a brownstone reveals about empathy, gender, and the human condition. Building Stories (public library) is a remarkable storytelling artifact by cartoonist Chris Ware, more than a decade in the making — a giant box containing fourteen individual print ephemera (books, booklets, comic strips, magazines, and even a gold-rimmed hardcover and a board game), each telling the interlocking tales of different residents of the same three-story Chicago brownstone, from the couple caught in a loveless relationship on the second floor, to the elderly spinster grappling with her own aging, to the bee trapped in the basement. Image via The Telegraph Ware writes: Who hasn’t tried when passing by a building, or a home, at night to peer past half-closed shades and blinds, hoping to catch a glimpse into the private lies of its inhabitants. On giving shape to the human experience: On the relationship between storytelling and empathy: On the building itself as a character: