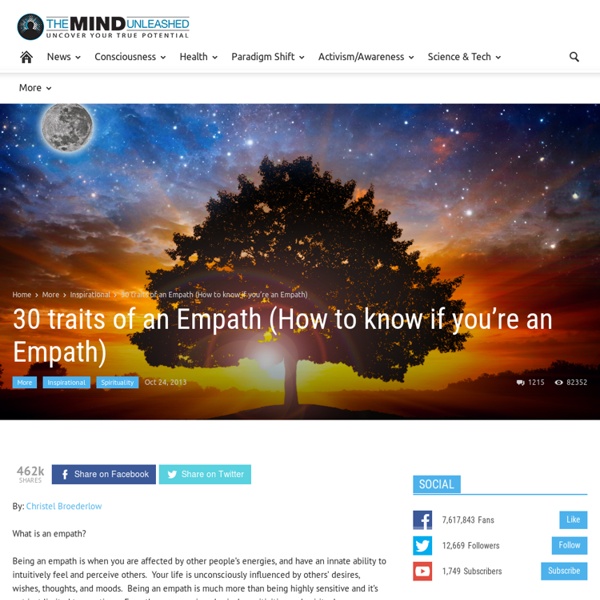 By: Christel Broederlow What is an empath? Being an empath is when you are affected by other people’s energies, and have an innate ability to intuitively feel and perceive others. Empaths are often quiet achievers. However, they can be the exact opposite: reclusive and apparently unresponsive at the best of times. Empaths have a tendency to openly feel what is outside of them more so than what is inside of them. Empaths are more inclined to pick up another’s feelings and project it back without realizing its origin in the first place. Without a doubt, this emotional withholding can be detrimental to one’s health, for the longer one’s thoughts and/or emotions aren’t released, the more power they build. Empaths are sensitive to TV, videos, movies, news and broadcasts. You will find empaths working with people, animals or nature with a true passion and dedication to help them. They are just as expressive with body language as with words, thoughts, and feelings. 1. 2. 3. 4. 5. 6. 7. 8. 9. Related:  Extra Pounds□ • psychology & behaviour

You are missed — Better Humans “Something feels missing from my life but I can’t quite put my finger on it.” I can’t tell you how many times I hear some variation of that every week. (It’s a lot.) I hear it from tech entrepreneurs who are on the verge of burn out, writers who are experiencing a temporary block, photographers who are making a ton of money working with big brands, and designers who have a full plate of client work. After listening to unique story after story, and each person attempting to describe what is happening in their life, it dawned on me that what was missing from every single story was very simple. “You are missing from your own story,” I said aloud to my friend the other day. He paused mid-sentence and thought about my observation. “I have stopped writing,” he said. “How much time do you spend with yourself?” “Close to none,” he said. “You are disconnected from yourself,” I said. We live in a world that continually pulls us outside of ourselves. 1) Morning pages. This morning I feel…

Empathic people are natural targets for sociopaths - protect yourself -- Science of the Spirit © Fotolia Olly The empathy trap: therapists and counselors almost by definition are empathic, to facilitate clients' recovery - but this quality can mean those carers are targets for sociopaths, aided by what Dr Jane & Tim McGregor call "apaths". The first UK article on this cruel sport shows how to identify and thus avoid it. People targeted by a sociopath often respond with self-deprecating comments like "I was stupid", "what was I thinking" of "I should've listened to my gut instinct". On initial contact, a sociopath will often test other people's empathy, so questions geared towards discovering if you are highly empathic or not should ring alarm bells. Sociopaths make up 25% of the prison population, committing over twice as many aggressive acts as other criminals. But not all sociopaths are found in prison. Exposure to and interaction with a sociopath in childhood can leave lifelong scars. This article is not about sociopaths per se but about surviving the harm they cause. © unknown

16 Habits Of Highly Sensitive People Do you feel like you reflect on things more than everyone else? Do you find yourself worrying about how other people feel? Do you prefer quieter, less chaotic environments? If the above sound true to you, you may be highly sensitive. While recent interest in introversion — driven largely by high-profile publications on the subject, including Susan Cain’s book “Quiet,” — has brought more awareness to personality traits that value less stimulation and higher sensitivity, Aron notes that highly sensitive people still tend to be considered the “minority.” But “minority” doesn’t mean bad — in fact, being highly sensitive carries a multitude of positive characteristics. 1. One of the hallmark characteristics of highly sensitive people is the ability to feel more deeply than their less-sensitive peers. 2. People who are highly sensitive will react more in a situation. 3. Depending on the culture, sensitivity can be perceived as an asset or a negative trait, Zeff explains. 4. 5. 6. 7. 8. 9. 10.

images (4) 7 Body Language Tricks To Make Anyone Instantly Like You There’s no question that body language is important. And, according to Leil Lowndes in her book “How To Talk To Anyone,” you can capture — and hold — anyone’s attention without even saying a word. We’ve selected the best body language techniques from the book and shared them below: The Flooding Smile “Don’t flash an immediate smile when you greet someone,” says Lowndes. Instead, pause and look at the other person’s face for a second, and then let a “big, warm, responsive smile flood over your face and overflow into your eyes.” Even though the delay is less than a second, it will convince people your smile is sincere and personalised for them. Sticky Eyes “Pretend your eyes are glued to your conversation partner’s with sticky warm taffy,” Lowndes advises. You can also try counting your conversation partner’s blinks. Epoxy Eyes In a group of people, you should watch the person you are interested in, no matter who else is talking. The Big-Baby Pivot Limit the Fidget Hang By Your Teeth

Your memory rewrites the past and edits it with new experiences, study finds - Science - News In the study, How your Memory Rewrites the Past, researchers looked at the exact point in time when incorrectly recalled information was implanted into an existing memory. The team found that memory rewrites the past with current information, updating recollections with new experiences. This form of editing happens in the hippocampus, working as the memory’s version of a film editor or special effects team. It does this to help us survive and adapt within constantly changing environments, and to encourage us to focus on things that are important in the present. Their results raise questions over the reliability of eyewitness court testimony, the team concluded. In the study, researchers at Northwestern University, in Chicago, asked 17 male and female participants to study 168 object locations on a computer screen with different backgrounds, such as an underwater ocean scene or an aerial view of farmland. "Our memory is not like a video camera," Ms Bridge added.

9 TED Talks That Will Change Your Life - Design Good Dare greatly. Get your game on. Find your genius. Oh, TED: You always know just what we need to hear. June 25, 2014 1. This 2010 talk at TEDxHouston started it all for researcher/storyteller Brene Brown, who’s now a bestselling author. 2. Jill Bolte, a brain scientist, woke up one day and discovered that her own brain was broken. 3. Even if poetry is not your thing, spoken word poet Sarah Kay will blow you away with performances of her work. 4. What if you could increase your lifespan by playing games? 5. After the success of her memoir Eat, Pray, Love, Gilbert realized that to avoid anguish (and gin in the mornings), she needed to separate what she was writing from her anxiety about how others might react to it. 6. Four years ago, Logan LaPlante’s parents pulled the then-13-year-old out of traditional schooling. 7. If you have ever felt overwhelmed in big social gatherings and just wanted to retreat, Cain’s talk will make you realize you’re not alone. 8. 9.

Plenty to gain with just seven minutes of pain Seven minutes of sweat It may be short and sweet but Sarah Berry discovers the seven-minute workout is far from easy. 4, 2013 It’s the science story that many gyms may not want to hear. Exercise science is a fine and intellectually fascinating thing. In 12 exercises deploying only body weight, a chair and a wall, it fulfills the latest mandates for high-intensity effort An article in the American College of Sports Medicine’s Health & Fitness Journal does just that. Can you handle seven minutes of pain? ‘‘There’s very good evidence that high-intensity interval training provides many of the fitness benefits of prolonged endurance training but in much less time,’’ says Chris Jordan, the director of exercise physiology at the Human Performance Institute in Orlando, Florida, and co-author of the article. Advertisement Those seven minutes should be, in a word, unpleasant.