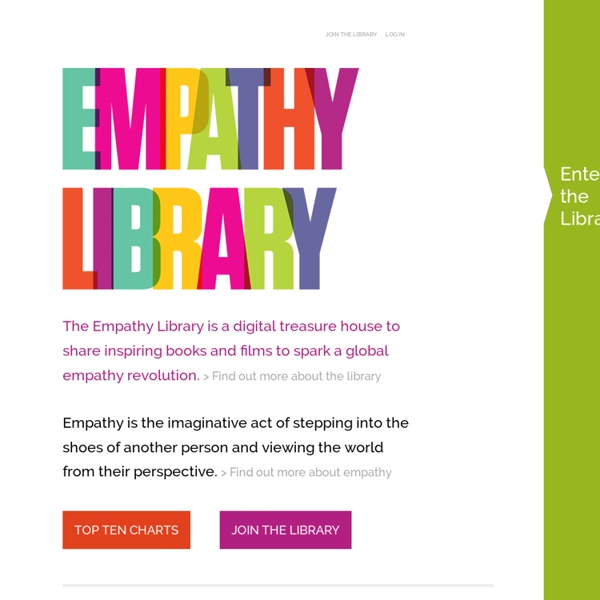 The Dark Side of Emotional Intelligence - Adam Grant Some of the greatest moments in human history were fueled by emotional intelligence. When Martin Luther King, Jr. presented his dream, he chose language that would stir the hearts of his audience. “Instead of honoring this sacred obligation” to liberty, King thundered, “America has given the Negro people a bad check.” He promised that a land “sweltering with the heat of oppression” could be “transformed into an oasis of freedom and justice,” and envisioned a future in which “on the red hills of Georgia sons of former slaves and the sons of former slave-owners will be able to sit down together at the table of brotherhood.” Delivering this electrifying message required emotional intelligence—the ability to recognize, understand, and manage emotions. Dr.

New Study Links Social Anxiety To Being An Empath Written by Amateo Ra| Have you ever felt anxious being around other people? For some, the feelings of social anxiety can be so intense that someone can feel totally paralyzed just to be out in public. Could social anxiety’s hidden link to empathy give us a greater understanding into the lives of those affected? Social anxiety can often be an extremely confusing, challenging and even interesting experience for many. Fear is the primary feeling generally attributed to social anxiety, and those who experience it often can’t seem to discover the origin of the social anxiety within themselves. All logic can seem to fail in the face of social anxiety.

30 traits of an Empath (How to know if you're an Empath) By: Christel Broederlow What is an empath? Being an empath is when you are affected by other people’s energies, and have an innate ability to intuitively feel and perceive others. Your life is unconsciously influenced by others’ desires, wishes, thoughts, and moods. How to Listen Between the Lines: Anna Deavere Smith on the Art of Listening in a Culture of Speaking by Maria Popova “Some people use language as a mask. And some want to create designed language that appears to reveal them but does not.” In his exquisite taxonomy of the nine kinds of silence, Paul Goodman included “the silence of listening to another speak, catching the drift and helping him be clear.” And yet so often we think of listening as merely an idle pause amid the monologue of making ourselves clear. Hardly anyone has done more to advance the art of listening in a culture of speaking more than artist, actor, playwright, educator, and enchantress of words Anna Deavere Smith, founder and director of Harvard’s Institute on the Arts and Civic Dialogue, and recipient of the prestigious MacArthur “genius” fellowship and the National Humanities Medal.

Empathic people are natural targets for sociopaths - protect yourself © Fotolia Olly The empathy trap: therapists and counselors almost by definition are empathic, to facilitate clients' recovery - but this quality can mean those carers are targets for sociopaths, aided by what Dr Jane & Tim McGregor call "apaths". The first UK article on this cruel sport shows how to identify and thus avoid it. People targeted by a sociopath often respond with self-deprecating comments like "I was stupid", "what was I thinking" of "I should've listened to my gut instinct".

Six Habits of Highly Empathic People If you think you’re hearing the word “empathy” everywhere, you’re right. It’s now on the lips of scientists and business leaders, education experts and political activists. But there is a vital question that few people ask: How can I expand my own empathic potential?