Fuel Creativity in the Classroom With Divergent Thinking 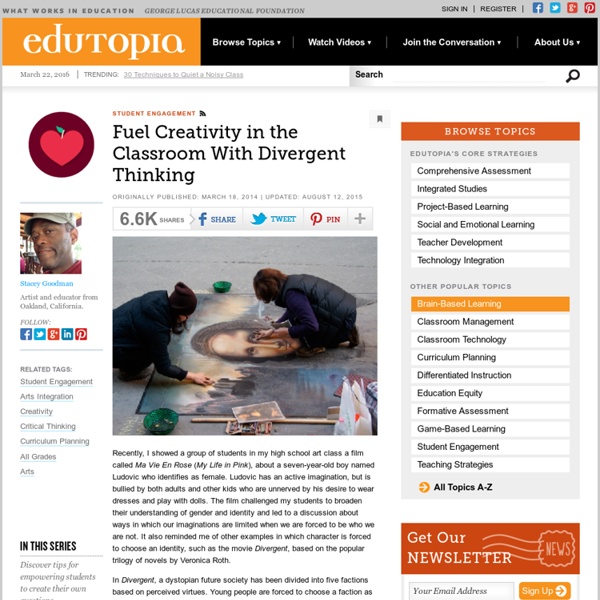 Recently, I showed a group of students in my high school art class a film called Ma Vie En Rose (My Life in Pink), about a seven-year-old boy named Ludovic who identifies as female. Ludovic has an active imagination, but is bullied by both adults and other kids who are unnerved by his desire to wear dresses and play with dolls. The film challenged my students to broaden their understanding of gender and identity and led to a discussion about ways in which our imaginations are limited when we are forced to be who we are not. It also reminded me of other examples in which character is forced to choose an identity, such as the movie Divergent, based on the popular trilogy of novels by Veronica Roth. In Divergent, a dystopian future society has been divided into five factions based on perceived virtues. Young people are forced to choose a faction as a rite of passage to becoming an adult. Defining Divergent Thinking In the Classroom: Strategies Strategy #2: Let the Music Play

Mix It Up! Authentic Activities for the World Language Classroom Do you ever feel stuck in a rut while planning your language classes? Perhaps you spend a lot of time lecturing at the white board, use the same activities with different vocabulary for every unit, or rely on teaching students grammar because that's how you were taught. No matter your "go to" activity, we are all much more engaging when we vary our activities and make them relatable.

Practical Pedagogies 2015: Ewan McIntosh Ewan's Background Ewan McIntosh is an award-winning educator and the founder of NoTosh Limited, based in Scotland, Australia and San Francisco, with a global reputation for researching and delivering new learning opportunities for some of the world’s top creative companies and school districts. The team has a unique ongoing experience in creativity in creative contexts (we work with some of the world’s top fashion, media and tech companies) and research-based learning and teaching development with schools. The perils of “Growth Mindset” education: Why we’re trying to fix our kids when we should be fixing the system One of the most popular ideas in education these days can be summarized in a single sentence (a fact that may help to account for its popularity). Here’s the sentence: Kids tend to fare better when they regard intelligence and other abilities not as fixed traits that they either have or lack, but as attributes that can be improved through effort. In a series of monographs over many years and in a book published in 2000, psychologist Carol Dweck used the label “incremental theory” to describe the self-fulfilling belief that one can become smarter. Rebranding it more catchily as the “growth mindset” allowed her to recycle the idea a few years later in a best-selling book for general readers.

Using Old Tech (Not Edtech) to Teach Thinking Skills I've been trying to use Google Docs to good effect in my ninth grade history classroom. It's a critical tool in that it lets me see the students puzzle out answers to their questions (especially with a heavy reliance of the "see revisions" function). I've viewed classroom technology as the means to sharing knowledge, in addition to acquiring or manipulating it.

A Global View: The Adventure of Kid-Friendly Foreign Films Image credit: iStockphoto For many of us, Oscar week can serve as the annual reminder of how many great grown-up films we have yet to see, and how many kids' movies we've already seen -- over and over and over. Next time you're faced with indoor recess or a snow day, movie night or a free period before a holiday, resist the temptation to pop in Finding Nemo or Shrek (though I love these, too), and use the opportunity to take a journey around the world.

Empathy In Action: One Teacher’s Story, Techniques and Tips Did you ever say that you would never grow up to be like one of your parents? Then years later find that following your passion led to a similar path? Leah Anderson promised herself she would not be a teacher, like her mom. But a year of working for Youth Venture in Los Angeles changed that. Alfie Kohn Is Bad for You and Dangerous For Your Children Alfie Kohn has been a leading voice in education for better than two decades. The author of 11 books and numerous articles in high-profile outlets, he is an influential go-to guy for education reporters seeking expert comments on everything from standardized testing policy to student motivation. Let me admit at the outset that I don’t really believe reading what he has to say is bad for you. But if Kohn were writing about his own work, that would probably be his takeaway message. Kohn has made a virtual industry out of finding interesting and provocative insights in the psychological literature and following them off the edge of a cliff. It’s worth reading Kohn simply because others do, and he is helpful as a pointer to interesting psychological literatures that have been ignored.

100 Activities for Fast Finishers After a wonderful warm-up and an excellent introduction, your beautifully executed instructions set up a skills-based task and all the class settles down to work. You breathe a sigh of relief and are just about to catch up on details before checking on your students’ progress. Suddenly a couple of hands go up, “Please, I don’t understand exercise 2”, calls out a student. Just as you are about to go over and help another voice calls out, “I’ve finished”, joined by “me, too” and a chorus of “what do we do now?”

Critical Thinking Takes Courage The Courage To Think Critically by Terry Heick For educators, as a term critical thinking is similar to words like democracy, global, and organic. You hear people use them all the time, but no one seems to understand what they mean. This kind of etymological opacity lends itself to them being misused, fumbled awkwardly, and abused.