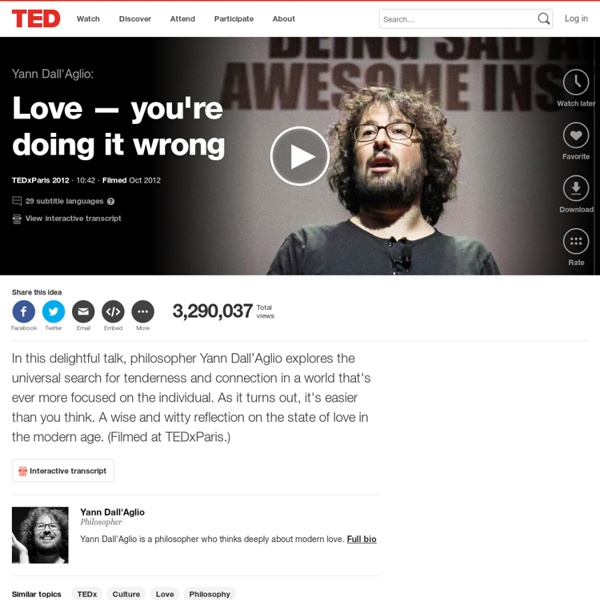 The funniest TED Talks | Playlist Now playing The New Yorker receives around 1,000 cartoons each week; it only publishes about 17 of them. In this hilarious, fast-paced, and insightful talk, the magazine's longstanding cartoon editor and self-proclaimed "humor analyst" Bob Mankoff dissects the comedy within just some of the "idea drawings" featured in the magazine, explaining what works, what doesn't, and why. How to Care for Introverts (in 12 easy steps) (Via Tumblr) I say this often but I’m pretty sure I was a cat in a previous life. If I believed in reincarnation , I’d be purring right now. You know how there are two kinds of people in this world: dog people and cat people. People who need to be alone often, who are jealous of their space and privacy, who purr unexpectedly or stop purring for no apparent reason (who knows, maybe they just spotted a mouse); who never come when you call them but expect you to answer immediately when they call you. On the wiser side of town, they look like they’ve learned to become friends with their solitude . I could raise my hand here and say “me, me”, but the older I get, the less black & white I see the world, but more like a faded sepia. (Screenshot Amélie via YouTube) Overall though, I think there’s a cat in each one of us as much as there’s a dog. ~ Criss Jami (Via Questionably Late Tumblr) {Based on Linda Kreger Silverman’s On Introversion.}

25+ apps that the TED staff swears make their everyday lives easier At our small, fast-moving nonprofit company, everyone does a couple of jobs — and productivity apps help us manage roles that shift between coding, writing/designing and running a full-scale conference twice a year. We asked the TED staff what apps they can’t live without. And beyond the classics—Instagram, Google Maps, Spotify, Uber, Seamless—we found some great apps that might help you too. (A star denotes that the app is free, or at least has a free version.) For random life stuff… Dark SkyA weather app with startling accuracy, its interface tells you things like: “Light rain starting in 22 minutes.” *SunriseLike your Google Calendar with key improvements, several staffers swear by this app. *KeyMeCommunications manager Samantha Kelly was excited to download this app, as she recently got locked out of her apartment. *Think DirtyThis app tells you exactly what’s in the personal care product you’re about to buy. *Camera360This app has more than 200 photo filters and 10 modes.

How to Love an Empath get elephant's newsletter I’ve battled my bleeding heart for my entire life. “Mommy what’s wrong?” I don’t lie to my children. So I replied, “Mommy’s feelings are hurt today honey. “I know how that is Mommy, my feelings are hurt all of the time.” She paused, wiping her warm little hands up and down my back, “Mommy, it’s so hard being a nice person.” I never thought of it this way, but it’s true. At the tender age of five, my daughter has already learned this lesson. We feel more than we think. This is a blessing and a curse. I’ve battled my bleeding heart for my entire life. I’ve tried to fit the mold for long enough, to not let other people affect me. Every day, I interact with others and I feel them without words, so does my daughter, she did it tonight and she was right, I was sad. How do I love her (an empath)? (This applies to children, friends, parents and romantic partnerships). It’s simple; I honor how she feels and I reassure her that her feelings are important. To Love An Empath

How to turn small talk into smart conversation Imagine almost any situation where two or more people are gathered—a wedding reception, a job interview, two off-duty cops hanging out in a Jacuzzi. What do these situations have in common? Almost all of them involve people trying to talk with each other. But in these very moments where a conversation would enhance an encounter, we often fall short. We can’t think of a thing to say. Or worse, we do a passable job at talking. We stagger through our romantic, professional and social worlds with the goal merely of not crashing, never considering that we might soar. We at What to Talk About headquarters set out to change this. Ask for stories, not answers One way to get beyond small talk is to ask open-ended questions. Instead of . . . Try . . . Break the mirror When small talk stalls out, it’s often due to a phenomenon we call “mirroring.” Mirrored example: James: It’s a beautiful day! See? Non-mirrored example: James: It’s a beautiful day! See? Leapfrog over the expected response

The Benefits of Talking about Thoughts with Tots Every parent knows that toddlers are strange and inscrutable creatures. They are capricious and contradictory, particularly when trying to interact with other people. My two-year-old daughter is no exception. One moment she is worrying about a crying baby. For decades, scientists believed that theory of mind – the ability to reason about other people’s thoughts and emotions – doesn’t begin to mature until children reach the age of three or four. Most two- and three-year-olds answer that Sally would look in the box because that’s where they know the ball is. While children’s performance on the false-belief task initially led scientists to conclude that theory of mind develops around age four, that assumption has since been overturned. While children typically master the standard false-belief task around the age of four, the timing can range from three to nearly six years of age, depending on the child. The scientists published their results recently in the journal Child Development.

Charming talks for a boost on a bad day | Playlist Now playing All under the age of 16, brothers Jonny, Robbie and Tommy Mizzone are from New Jersey, a US state that's better known for the rock of Bruce Springsteen than the bluegrass of Earl Scruggs. Nonetheless, the siblings began performing bluegrass covers, as well as their own compositions, at a young age. Here, they play three dazzling songs in three different keys, passing the lead back and forth from fiddle to banjo to guitar. Six Habits of Highly Empathic People Photo Credit: Shutterstock.com/Andy Dean Photography January 27, 2014 | Like this article? Join our email list: Stay up to date with the latest headlines via email. This article originally appeared on Greater Good, the online magazine of UC Berkeley's Greater Good Science Center. If you think you’re hearing the word “empathy” everywhere, you’re right. But what is empathy? The big buzz about empathy stems from a revolutionary shift in the science of how we understand human nature. Over the last decade, neuroscientists have identified a 10-section “empathy circuit” in our brains which, if damaged, can curtail our ability to understand what other people are feeling. But empathy doesn’t stop developing in childhood. Habit 1: Cultivate Curiosity about Strangers Highly empathic people (HEPs) have an insatiable curiosity about strangers. Curiosity expands our empathy when we talk to people outside our usual social circle, encountering lives and worldviews very different from our own.

Graduation…now what? | Playlist Now playing Clinical psychologist Meg Jay has a bold message for twentysomethings: Contrary to popular belief, your 20s are not a throwaway decade. In this provocative talk, Jay says that just because marriage, work and kids are happening later in life, doesn’t mean you can’t start planning now. She gives 3 pieces of advice for how twentysomethings can re-claim adulthood in the defining decade of their lives. “In your 20s, you may not get married or figure out exactly what career you want to pursue. Building Stories: Chris Ware Explores the Architecture of Being Human by Maria Popova What the inner life of a brownstone reveals about empathy, gender, and the human condition. Building Stories (public library) is a remarkable storytelling artifact by cartoonist Chris Ware, more than a decade in the making — a giant box containing fourteen individual print ephemera (books, booklets, comic strips, magazines, and even a gold-rimmed hardcover and a board game), each telling the interlocking tales of different residents of the same three-story Chicago brownstone, from the couple caught in a loveless relationship on the second floor, to the elderly spinster grappling with her own aging, to the bee trapped in the basement. Image via The Telegraph Ware writes: Who hasn’t tried when passing by a building, or a home, at night to peer past half-closed shades and blinds, hoping to catch a glimpse into the private lies of its inhabitants. On giving shape to the human experience: On the relationship between storytelling and empathy: On the building itself as a character: