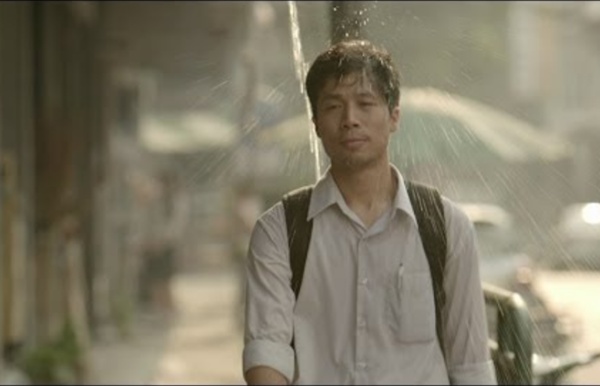 Moments of emotion from around the globe “Life as we live it today is filled with barriers that separate us,” Mimo Khair says, “but when I’m in the street with my camera, I can connect to another person, and that for me is when the magic happens.” From the streets of Shanghai to remote villages of the Democratic Republic of the Congo, the Lebanese photographer has traveled the world capturing moments of emotion on the road, illustrating the connectedness of the human race through her poignant images. Over the course of her career, Mimo captured memorable moments on the streets in many countries, but was particularly moved by an interaction with a young Syrian girl living in a refugee camp in Lebanon. Mimo photographed the green-eyed girl after noticing the word “love” written out on her hand in English and Arabic. ~mimo~I love you~ a young Syrian refugee “When I asked further about the girl, I found out she had lost both of her parents, and actually her whole family only a few days ago,” Mimo explains.

Random Acts of Kindness Start A Kindness Journal Or Blog "No act of kindness, however small, is ever wasted." -Aesop Volunteer At A Food Bank Ebo-Lie: Man Living In Ghana Confirms Ebola Is A Hoax! By Steven Bancarz| A statement made by a man in Ghana named Nana Kwame has rocked the internet in the last few days. The following information needs to reach people. We need to see Ebola for what it really is. It’s time that the world wakes up to the agenda behind all of this hysteria. Here is what this man has to say about what is happening in his home country: “People in the Western World need to know what’s happening here in West Africa.

40 Of The Most Powerful Social Issue Ads That’ll Make You Stop And Think Many people complain about advertisements as an obnoxious way for companies to invade our everyday lives and cram their products down our throats, but that’s not all that advertisements are good for. The advertisements on this list are excellent examples of effective advertising strategies for social issue campaigns that let their voices be heard. Show Full Text A well-made advertisement is designed to grab your attention and to remain in your memory long after you’ve left it behind, and that is exactly what many of these social causes need. Getting people to think and worry about various social and environmental issues (or even simply getting them to be aware of them) is important for raising public supporting and affecting meaningful changes. A few of these ads are, in fact, commercial ads, but it’s still nice that they champion socially or environmentally aware causes/products.

Anxiety and sleeping pills 'linked to dementia' 9 September 2014Last updated at 22:21 ET By Helen Briggs Health editor, BBC News website The class of drugs known as benzodiazepines is mainly used to treat anxiety or insomnia Long-term use of pills for anxiety and sleep problems may be linked to Alzheimer's, research suggests. Kindness Project Ideas 1. Welcome Winter Gloves Submitted by Anonymous, Idaho A high school psychology teacher in Idaho purchased a pair of winter gloves for every student in her class and assigned them to find someone in their school or community who needs that pair of gloves, perhaps to keep warm or to do a job. TED Talks for Job Interview Inspiration - The Muse TED Talks are fun and interesting. Preparing for interviews can be, uh, less fun and interesting. To reconcile this, here are five fabulous TED Talks that are both enjoyable to watch and useful in helping you prepare for your next big interview. 1.

15 Powerful Quotes From the World's Most Humble President "Modest yet bold, liberal and fun-loving." Naming Uruguay the country of the year in 2013, the Economist may very well have described the rising nation's head of state, President José "Pepe" Mujica. Known for his unusual frankness, fiery oration and bold leadership to turn ideas into action, the 78-year-old leader possesses and practices the very characteristics that many world leaders fail to emulate. He has also garnered international acclaim for his progressive policies, down-to-earth personality and simple presentation, which has earned him a reputation as "the world's poorest president." Living in a small, one-bedroom farm with his wife, Sen. Lucia Toplansky, and a number of dogs (including three-legged Manuela), Mujica donates 90% of his salary to charity, leads by example in an age of austerity and has gained international acclaim for pushing ahead with policies on cannabis legalisation, same-sex marriage and abortion, while decrying excessive consumption.

Pay It Forward (Grade 9) Anticipatory Set:Ask the students todescribe someslogans on banners orposterthey have seen that raise awareness about an issue or challenge others to do something good (related to education, the environment, health, poverty and hunger, or world peace, or civil rights). Examples: "All People Are Created Equal" or "Recycle" or "Good Planets are Hard to Find" or "Read a Good Book." Talk aboutwhether clever sayings or simplestatementsget their attention more. Ask whether abanner orposteris an effective way to teach others about issues. Why or why not?Introduce the theme of the day: Paying It Forward.Paying it forward, also known as serial reciprocity, refers to when people repay the service they receive bypassing it on to someone else.

A Game of Shark and Minnow - Who Will Win Control of the South China Sea? A Game of Shark and Minnow In a remote corner of the South China Sea, 105 nautical miles from the Philippines, lies a submerged reef the Filipinos call Ayungin. Satellite imagery: NASA In most ways it resembles the hundreds of other reefs, islands, rock clusters and cays that collectively are called the Spratly Islands.