Empathy. Want Your Students to Be Kinder? Try This Assignment. First Person By Justin Parmenter This fall, gun violence created waves of panic and helplessness in my school district, Charlotte-Mecklenburg, when a freshman at Butler High School shot and killed a classmate in the hallway over a personal conflict.

With Everytown for Gun Safety reporting more than 80 incidents of gunfire on American school grounds already this year, it had seemed like only a matter of time before a shooting touched our campus community. 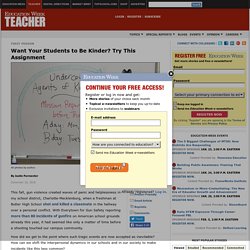 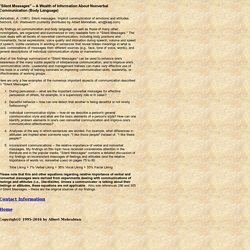 Silent messages: Implicit communication of emotions and attitudes. Belmont, CA: Wadsworth (currently distributed by Albert Mehrabian, am@kaaj.com) My findings on communication and body language, as well as those of many other investigators, are organized and summarized in very readable form in "Silent Messages. " The book deals with all facets of nonverbal communication, including body positions and movements, facial expressions, voice quality and intonation during speech, volume and speed of speech, subtle variations in wording of sentences that reveal hidden meanings in what is said, combinations of messages from different sources (e.g., face, tone of voice, words), and general descriptions of individual communication styles or mannerisms.

Edutopia. Voix plurielles 2016. Online courses don't work, but education can still be disrupted. CSA-Archive/iStock The labour force is changing at a rapid pace. 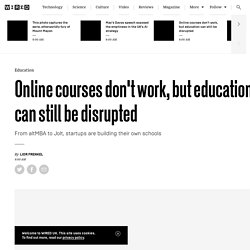 Technology is generating entirely new industries and jobs, while eradicating antiquated ones. Some may feel uneasy with these shifts, attempting to come to terms with how to survive, but others see them as an opportunity. Quick Classroom Exercises to Combat Stress. The trauma and adversity that students are carrying into classrooms are changing how educators need to address learning and academic performance. Fifty-one percent of children in public schools live in low-income households, and when poverty levels exceed 50 percent, there’s a significant drop in academic performance across all grade levels.

At the same time, 25 percent of all adolescents—including 30 percent of adolescent girls—are experiencing anxiety disorders. Creating is not just a 'nice' activity; it transforms, connects and empowers. As a child, when I wasn’t eating, sleeping or at school, I was making. 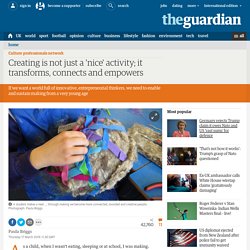 My memories of childhood relate to stuff – smell, material and texture: digging up the garden to make heavy, grogged clay; melting wax crayons to make 3D shapes; building matchstick houses; casting plaster in Disney latex moulds; and cutting out. Always cutting, shaping and sticking. Since then, I’ve studied, made and taught sculpture. The Elephant In The (Staff) Room - Why We Need To Talk About Teacher Wellbeing. It is impossible to support the social and emotional health of young people, if we as teachers do not attend to our own emotional health. 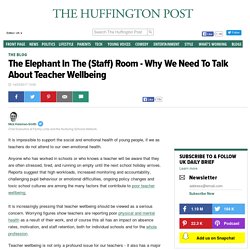 Anyone who has worked in schools or who knows a teacher will be aware that they are often stressed, tired, and running on empty until the next school holiday arrives. Reports suggest that high workloads, increased monitoring and accountability, challenging pupil behaviour or emotional difficulties, ongoing policy changes and toxic school cultures are among the many factors that contribute to poor teacher wellbeing. 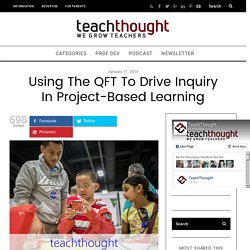 The jobs of the future – and two skills you need to get them. The future of work is a key topic at this year's World Economic Forum Annual Meeting. 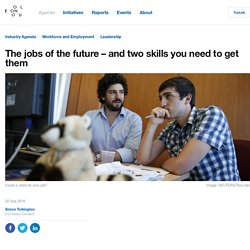 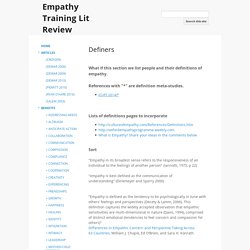 References with "*" are definition meta-studies. Lists of definitions pages to incorporate Sort "Empathy in its broadest sense refers to the responsiveness of an individual to the feelings of another person" (Iannotti, 1975, p 22) "empathy is best defined as the communication of understanding" (Dinkmeyer and Sperry 2000) How to be a good listener: the experts' guide. A close friend was going through a terrible time this summer. 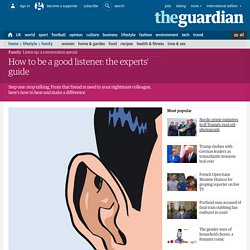 Forbes Welcome. Noam Chomsky on the Dangers of Standardized Testing. “The assessment itself is completely artificial. 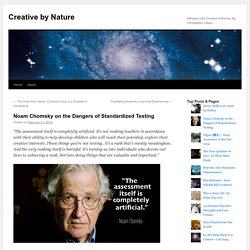 It’s not ranking teachers in accordance with their ability to help develop children who will reach their potential, explore their creative interests. Those things you’re not testing.. it’s a rank that’s mostly meaningless. And the very ranking itself is harmful. Why Emotions Are Integral to Learning. Excerpted from Emotions, Learning, and the Brain, (c) 2016 by Mary Helen Immordino-Yang.

Used with the permission of the publisher, W. W. Norton & Co. Présentation générale: l'émergeance d'une psychologie culturelle et les processus d'éducation. The Seven Best Short Films to Promote Empathy in ELT - Kieran Donaghy. Empathy, which has been beautifully defined by Roman Krznaric as “the art of stepping imaginatively into the shoes of another person, understanding their feelings and perspectives, and using that understanding to guide your actions”, may be one of the qualities which distinguishes an average teacher from an excellent teacher in the eyes of the student.

I think that empathy is increasingly important in language education as communication requires a sophisticated degree of empathy, in order to communicate effectively, language teachers, teacher trainers and learners needs to be able to understand the other person’s affective and cognitive states. 5 skills students need to be contributing global citizens – Mr Kemp. Following up from the honor of being selected in Huffington Posts Top 12 Global Education Blogs of 2014/2015 I have been chosen again in this amazing group and for 2016/2017 will be contributing to Huffington Post’s Education blog once a month.

This month we look to answer the following highly controversial question “What are the important skills, behaviors, and attitudes that students need to become contributing global citizens?” – here is my response: In the 21st century, our learners are truly global citizens who are immersed in the world that they live both physically and virtually, or at least they should be. I often ask myself, what will these students be doing 10/20 years from now, and every time I am faced with the same answer – I don’t know! We are teaching students for jobs that don’t exist yet.

Image Source: Every child needs a champion. Awesome graphic from Sylvia Duckworth! These extraordinary pictures show the dividing line between rich and poor in South Africa. New VSI on Self - Virtual Special Issues. Virtual Special Issue on the Self Edited by: Achilleas Kostoulas, & Sarah Mercer University of Graz, Austria Introduction This is the second in a series of Virtual Special Issues published by System, which showcase selected articles that have appeared in the journal.

In this issue, we focus on the psychological construct of the self in language teaching and learning, as viewed from diverse theoretical perspectives. Forty articles published in the last 15 years were reviewed, of which ten were selected for inclusion in this issue, taking into account their impact, their conceptual salience or their potential to exemplify theoretical developments in the field. Hippies, Hipsters and the Generational Inbetweeners.

It's About Empathy – Connection Ties Us Together. Introducing a series of poems on the Fourth Industrial Revolution. Empathy Curriculum. CCSD59 - Social Emotional Learning (SEL) Success in School. Skills for Life. The most interesting line in Obama’s Howard speech was about empathy, not ‘blackness’ President Obama's speech at Howard University's commencement on May 7 was full of advice on civic engagement, black history and democracy. (The Washington Post) Donald Trump isn’t empathetic. Is that a problem? Creativitypost.