Why We Cry: The Science of Sobbing and Emotional Tearing 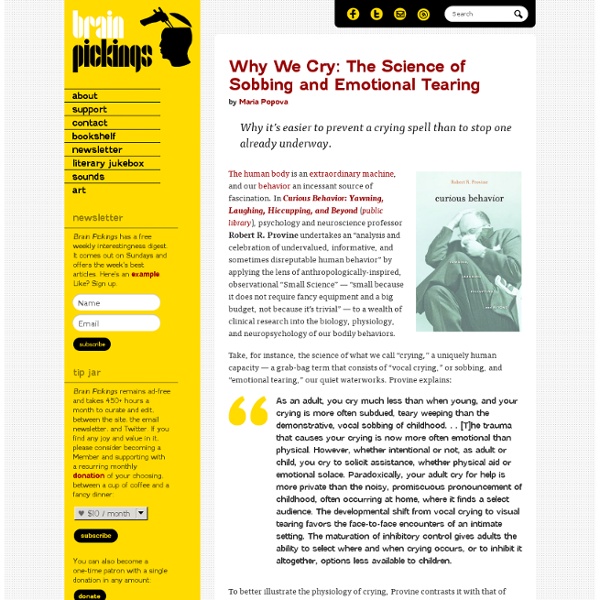 by Maria Popova Why it’s easier to prevent a crying spell than to stop one already underway. The human body is an extraordinary machine, and our behavior an incessant source of fascination. In Curious Behavior: Yawning, Laughing, Hiccupping, and Beyond (public library), psychology and neuroscience professor Robert R. Provine undertakes an “analysis and celebration of undervalued, informative, and sometimes disreputable human behavior” by applying the lens of anthropologically-inspired, observational “Small Science” — “small because it does not require fancy equipment and a big budget, not because it’s trivial” — to a wealth of clinical research into the biology, physiology, and neuropsychology of our bodily behaviors. Take, for instance, the science of what we call “crying,” a uniquely human capacity — a grab-bag term that consists of “vocal crying,” or sobbing, and “emotional tearing,” our quiet waterworks. Photograph via Flickr Commons Donating = Loving Share on Tumblr

8 Things Everybody Ought to Know About Concentrating “Music helps me concentrate,” Mike said to me glancing briefly over his shoulder. Mike was in his room writing a paper for his U.S. History class. On his desk next to his computer sat crunched Red Bulls, empty Gatorade bottles, some extra pocket change and scattered pieces of paper. The Process Of Cosmic Self-Destruction at the Speed of Light A theory pondered over often by scientists is whether the annihilation of the universe would be as easy as pushing a button. Furthermore, the process of cosmic self-destruction would wipe out everything, including life, so efficiently that the known form of the universe may never exist again. The theory has recently been explained further in a video, which gives more insight on how self-destruction comes down to energy levels and stability. According to science explainer Kurzgesagt, there is more energy in a system when the level of energy is higher.

21 Classroom Management Tips And Tricks Doesn’t every teacher dream of an efficient classroom where no problems occur and lessons run smoothly? Yes I know probably not a reality, but I believe there are definitely strategies and processes that you can put in place to assist with the smooth running of your classroom. You’re probably already doing some of these classroom management tips and tricks or you are familiar with them. But, I hope you find some new ideas in this list to help you with your classroom management.

Scientists have found a bizarre similarity between human cells and neutron stars If you were to compare yourself to a neutron star, you probably wouldn’t find very many things in common. After all, neutron stars – celestial bodies with super strong magnetic fields – are made from collapsed star cores, lie light-years away from Earth, and don’t even watch Netflix. But, according to new research, we share at least one similarity: the geometry of the matter that makes us. Are You Empathic? 3 Types of Empathy and What They Mean You might recall President Bill Clinton's famous quote, "I feel your pain." It suggested that he had empathy and it made him seem more human and in touch with his constituents. Did he really mean it?

Physicists just discovered electrons behaving like light in graphene... but better Just when you thought graphene couldn't get any more awesome, physicists have for the first time spotted electrons in this atomically-thin material behaving like particles of light... only better. This strange behaviour was first predicted in 2007, but has never been reproduced experimentally until now - and the phenomenon could lead to a whole new way of making super-efficient electronics. In the new study, the electrons displayed negative refraction - which means they'd changed their path as they crossed a boundary between two regions of graphene. That meant they could be manipulated in graphene using optical devices like lenses and prisms. "The ability to manipulate electrons in a conducting material like light rays opens up entirely new ways of thinking about electronics," said lead researcher Cory Dean from Columbia University. "For example, the switches that make up computer chips operate by turning the entire device on or off, and this consumes significant power," he adds.

Aspergers Adult AQ Test Quiz Online: Autism Spectrum Quotient I prefer to do things with others rather than on my own. I prefer to do things the same way over and over again. If I try to imagine something, I find it very easy to create a picture in my mind. I frequently get so strongly absorbed in one thing that I lose sight of other things. Johns Hopkins psychedelics research keeps finding medical uses / Boing Boing Johns Hopkins is among several institutions challenging a key tenet of outlawing psychedelics: that they have "no medicinal use." Baltimore Magazine examines the progress made by key researchers Roland Griffiths and Bill Richards. Snip: Ten years ago, Hopkins researchers, led by Griffiths and Bill Richards, a 76-year-old clinical psychologist whose work with psilocybin dates back to the heady days of psychedelic research in the early ’60s, published their first paper on their new pilot studies. Cited as a landmark report by former National Institute on Drug Abuse Director Charles Schuster, the ongoing research at Hopkins—and now other universities—has begun revealing a host of potentially dramatic therapeutic applications for the ancient psychedelic used by indigenous Mexican and South American communities in religious rituals for thousands of years.

120 Ways to Boost Your Brain Power Here are 120 things you can do starting today to help you think faster, improve memory, comprehend information better and unleash your brain’s full potential. Solve puzzles and brainteasers.Cultivate ambidexterity. Use your non-dominant hand to brush your teeth, comb your hair or use the mouse. Write with both hands simultaneously. Switch hands for knife and fork.Embrace ambiguity. Learn to enjoy things like paradoxes and optical illusions.Learn mind mapping.Block one or more senses. Physicists just discovered a second state of liquid water It’s one of the most fundamental compounds on Earth, and it makes up roughly 60 percent of the human body, and yet water is turning out to be stranger than we could have ever imagined. Researchers have been investigating the physical properties of water, and found that when it’s heated to between 40 and 60 degrees Celsius, it hits a 'crossover temperature', and appears to start switching between two different states of liquid. As a chemical compound, water is so vital to life on Earth, we’ve been underestimating how legitimately weird it is. We’ve all gotten so used to it, it’s hard to imagine things getting any more complex than the three basic states: solid, liquid, gas. (Under very rare circumstances, a plasma-like state can also form.)

How to Read Body Language Key Points Look for emotional cues, such as crying, anger, or embarrassment. More ↓Look for physical cues to determine the status of a relationship. ↓Learn how to read eyes and body language for attraction cues. ↓Study a person's eyes, facial expressions, and body language to read specific cues, such as power New Research on Plant Intelligence May Forever Change How You Think about Plants The Intelligent Plant. That is the title of a recent article in The New Yorker — and new research is showing that plants have astounding abilities to sense and react to the world. But can a plant be intelligent? Some plant scientists insist they are — since they can sense, learn, remember and even react in ways that would be familiar to humans. Michael Pollan, author of such books as The Omnivore’s Dilemma and The Botany of Desire, wrote the New Yorker piece about the developments in plant science. He says for the longest time, even mentioning the idea that plants could be intelligent was a quick way to being labeled “a whacko.”

Related:
Related:  psychology   -  Art and science   -  Emotion   -  Emotion Mgmnt.   -  Colour & Emotion   -  Resonance   -  The Saudi Connection (911)   -  internet connection   -  Spotting Emotional Manipulation   -  CALLIHOO Writing Helps--Feelings Table   -  Tone/Attitude Words   -  Basic Emotions   -  How to Hack Your Brain   -  David Brooks: The social animal | Video on TED.com   -  Science of the Heart, Science of Coherence, Heart Rate Variability, Institute HeartMath   -  NOVA | Mirror Neurons   -  Optimizing Emotional Engagement In Web Design Through Metrics | Smashing Magazine   -  Thandie Newton: Embracing otherness, embracing myself | Video on TED.com   -  Emotional Intelligence theories - Daniel Goleman's EQ concepts   -  Are You Empathic? 3 Types of Empathy and What They Mean | Psychology Today   -  InnerSelf.com   -  List of Feeling Words   -  Contrasting and categorization of emotions - Wikipedia   -  The Importance of Emotional Intelligence in the Workplace   -  Einstein on Kindness, Our Shared Existence, and Life’s Highest Ideals | Brain Pickings   -  5 Things Every Presenter Should Know About People, Animated | Brain Pickings   -  The Wheel of Emotion | Learning Web Development & Programming   -  Being Defensive   -  Six Habits of Highly Empathic People   -  Take a Seat - Make a Friend? - YouTube   -  Graham Hancock - The War on Consciousness BANNED TED TALK - YouTube   -  Rosalind Robertson (the DIY Couturier) (21 Tips to Keep Your Shit Together When You're...)   -  Psychology of Color: The meaning behind what we see   -  5-Minute Film Festival: Videos on Kindness, Empathy, and Connection   -  The Emotionary | HOW ARE YOU FEELING TODAY?   -  When Power Goes To Your Head, It May Shut Out Your Heart   -  List of Emotions   -  The Search for Basic Emotions