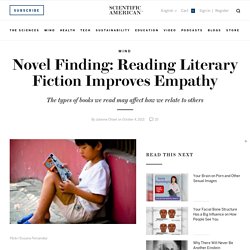 Researchers at The New School in New York City have found evidence that literary fiction improves a reader’s capacity to understand what others are thinking and feeling. Emanuele Castano, a social psychologist, along with PhD candidate David Kidd conducted five studies in which they divided a varying number of participants (ranging from 86 to 356) and gave them different reading assignments: excerpts from genre (or popular) fiction, literary fiction, nonfiction or nothing. After they finished the excerpts the participants took a test that measured their ability to infer and understand other people’s thoughts and emotions. The researchers found, to their surprise, a significant difference between the literary- and genre-fiction readers.

When study participants read non-fiction or nothing, their results were unimpressive. The Rules of Engagement: How Empaths can Learn to Let Go. As a young woman, I thought it was my job to feel other people’s emotions and help them process what was going on. 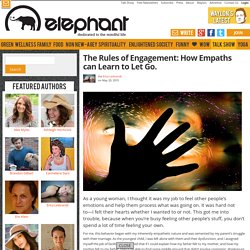 It was hard not to—I felt their hearts whether I wanted to or not. This got me into trouble, because when you’re busy feeling other people’s stuff, you don’t spend a lot of time feeling your own. For me, this behavior began with my inherently empathetic nature and was cemented by my parent’s struggle with their marriage. Compassion and the Real Meaning of the Golden Rule. By Maria Popova “Compassion… asks us to look into our own hearts, discover what gives us pain, and then refuse, under any circumstance whatsoever, to inflict that pain on anybody else.” 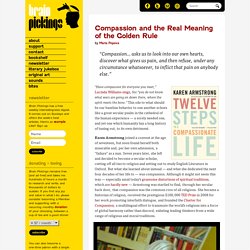 “Have compassion for everyone you meet,” Lucinda Williams sings, for “you do not know what wars are going on down there, where the spirit meets the bone.” The secret ingredient that makes some teams better than others. Running a software company in Boston, I recognized — and my board told me — that we needed to reposition the business. 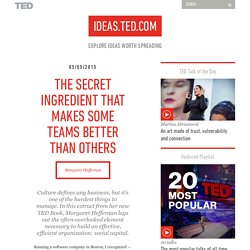 Our product was too bland, too generic to stimulate excitement or loyalty. A Process for Empathetic Product Design. The discipline of product management is shifting from an external focus on the market, or an internal focus on technology, to an empathetic focus on people. 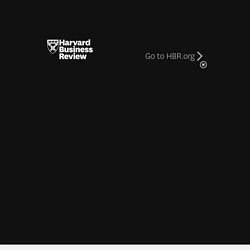 While it’s not too difficult to rally people around this general idea, it can be hard at first to understand how to translate it into tactics. So in this article, I’ll walk through how we applied this approach to a particular product at a start-up, and how it led to large-scale adoption and, ultimately, the acquisition of the company. I was previously VP of Design at MyEdu, where we focused on helping college students succeed in college, show their academic accomplishments, and gain employment. MyEdu started with a series of free academic planning tools, including a schedule planner. Emotional Intelligence: The Social Skills You Weren't Taught in School. Synesthesia and the Poetry of Numbers: Autistic Savant Daniel Tammet on Literature, Math, and Empathy, by Way of Borges. By Maria Popova “Like works of literature, mathematical ideas help expand our circle of empathy, liberating us from the tyranny of a single, parochial point of view.” 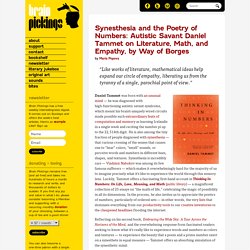 Daniel Tammet was born with an unusual mind — he was diagnosed with high-functioning autistic savant syndrome, which meant his brain’s uniquely wired circuits made possible such extraordinary feats of computation and memory as learning Icelandic in a single week and reciting the number pi up to the 22,514th digit. He is also among the tiny fraction of people diagnosed with synesthesia — that curious crossing of the senses that causes one to “hear” colors, “smell” sounds, or perceive words and numbers in different hues, shapes, and textures.

Synesthesia is incredibly rare — Vladimir Nabokov was among its few famous sufferers — which makes it overwhelmingly hard for the majority of us to imagine precisely what it’s like to experience the world through this sensory lens. Imagine. Daniel Tammet. Donating = Loving Share on Tumblr. Joan Halifax: Compassion and the true meaning of empathy. Are you raising nice kids? A Harvard psychologist gives 5 ways to raise them to be kind. Richard Weissbourd, a Harvard psychologist with the graduate school of education, and the Making Caring Common Project have come up with recommendations about how to raise children to become caring, respectful and responsible adults. 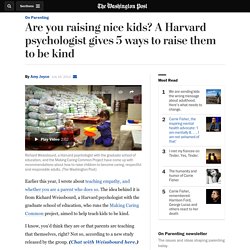 Trying to cheer a depressed friend up might leave you both worse off than you started. 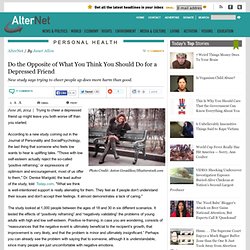 According to a new study coming out in the Journal of Personality and SocialPsychology, the last thing that someone who feels low wants to hear is uplifting tales. "Those with low self-esteem actually reject the so-called 'positive reframing,' or expressions of optimism and encouragement, most of us offer to them," Dr. Denise Marigold, the lead author of the study, told Today.com. "What we think is well-intentioned support is really alienating for them. They feel as if people don't understand their issues and don't accept their feelings. The study looked at 1,000 people between the ages of 18 and 30 in six different scenarios.

Negative validation, the study explains, “communicate[s] that the feelings, actions, or responses of the recipient are normal and appropriate to the situation” and “express[es] appreciation for the recipient’s predicament or for the difficulty of the situation.” Julian Treasure: How to speak so that people want to listen. 5 Habits of Highly Compassionate Men. Photo Credit: MelvinDyson / Shutterstock.com April 7, 2014 | Like this article? 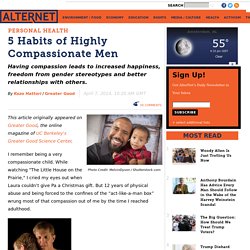 Join our email list: Stay up to date with the latest headlines via email. This article originally appeared on Greater Good, the online magazine of UC Berkeley's Greater Good Science Center. I remember being a very compassionate child. Restructuring the economy with empathy as its center. Democracy is lost unless we re-structure our economies, and re-structuring our economies requires a new operating system based on different values. 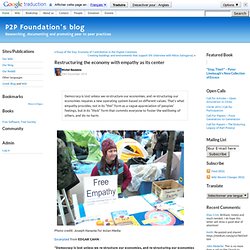 At present, our economic systems afford us only the narrowest view of human potential. What would change if the economy was re-structured with empathy at the center? In markets prices vary according to supply and demand. Brené Brown on Vulnerability, Human Connection, and the Difference Between Empathy and Sympathy, Animated. Empathy: A Short Conceptual History and An Anthropological Question. Savage Minds welcomes guest blogger LINDSAY A BELL In my first post, I proposed that anthropology might be particularly well suited to thinking through the concept of empathy. In North America, “empathy” has come to be a prominent term across the caring arts. In areas ranging from self-help to health care, empathy seems to be something that can and should be cultivated.

In 2006, President Obama declared that an “empathy deficit” was more pressing than a federal budgetary deficit. How Should We Live: History’s Forgotten Wisdom on Love, Time, Family, Empathy, and Other Aspects of the Art of Living. By Maria Popova “How to pursue the art of living has become the great quandary of our age… The future of the art of living can be found by gazing into the past.” “He who cannot draw on three thousand years is living from hand to mouth,” Goethe famously proclaimed. Thomas Hobbes extolled “the principal and proper work of history being to instruct, and enable men by the knowledge of actions past to bear themselves prudently in the present and providently in the future.” The Neurochemistry of Empathy, Storytelling, and the Dramatic Arc, Animated. Unleashing Empathy: How Teachers Transform Classrooms With Emotional Learning by Lennon Flowers.

Elif Shafak: The politics of fiction. Why Empathy Is Your Most Important Skill (and How to Practice It) 5 Habits of Highly Compassionate Men. Six Habits of Highly Empathic People. Photo Credit: Shutterstock.com/Andy Dean Photography January 27, 2014 | Like this article? Join our email list: Stay up to date with the latest headlines via email. This article originally appeared on Greater Good, the online magazine of UC Berkeley's Greater Good Science Center. If you think you’re hearing the word “empathy” everywhere, you’re right. But what is empathy? The big buzz about empathy stems from a revolutionary shift in the science of how we understand human nature. Conversations on Compassion with James Doty, MD, and Thich Nhat Hanh. Building Stories: Chris Ware Explores the Architecture of Being Human. By Maria Popova What the inner life of a brownstone reveals about empathy, gender, and the human condition. Building Stories (public library) is a remarkable storytelling artifact by cartoonist Chris Ware, more than a decade in the making — a giant box containing fourteen individual print ephemera (books, booklets, comic strips, magazines, and even a gold-rimmed hardcover and a board game), each telling the interlocking tales of different residents of the same three-story Chicago brownstone, from the couple caught in a loveless relationship on the second floor, to the elderly spinster grappling with her own aging, to the bee trapped in the basement.

Image via The Telegraph. How to Love an Empath. Get elephant's newsletter I’ve battled my bleeding heart for my entire life. How to Care for Introverts (in 12 easy steps) (Via Tumblr) I say this often but I’m pretty sure I was a cat in a previous life. If I believed in reincarnation , I’d be purring right now. You know how there are two kinds of people in this world: dog people and cat people. Yann Dall'Aglio: Love. How Should We Live: History’s Forgotten Wisdom on Love, Time, Family, Empathy, and Other Aspects of the Art of Living. The Benefits of Talking about Thoughts with Tots. Every parent knows that toddlers are strange and inscrutable creatures. The Neurochemistry of Empathy, Storytelling, and the Dramatic Arc, Animated.