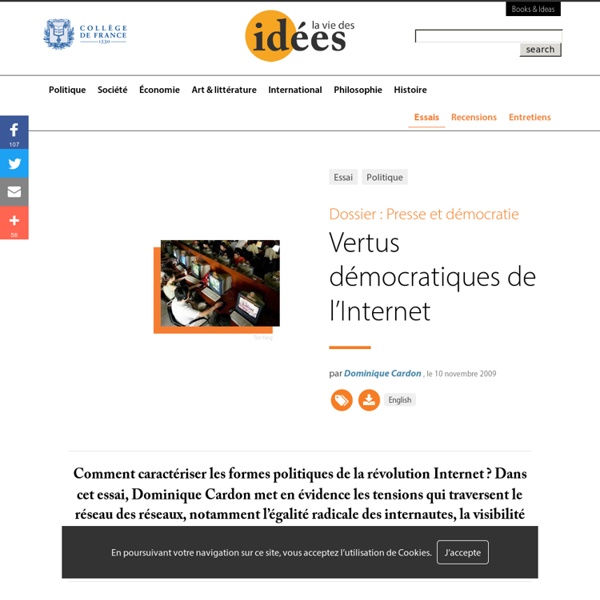 The future of Nationalism As time marches on, we see the weakening of geographical forces on the lives and activities of humans. The borders we used to draw are being replaced with centers and relationships of relevance. People flock to cities, the countryside empties, and the connection to a National identity in a virtual connected world is no longer the most powerful connection an indivudal feels to another group. So where will this trend take us? What will the nations of the future look like? When we move towards the borderless expanse of space and cyberspace, how will we define ourselves?

The tone of life on social networking sites The tone of life on social networking sites The overall social and emotional climate of social networking sites (SNS) is a very positive one where adult users get personal rewards and satisfactions at far higher levels than they encounter anti-social people or have ill consequences from their encounters. A nationally representative phone survey of American adults finds that: 85% of SNS-using adults say that their experience on the sites is that people are mostly kind, compared with 5% who say people they observe on the sites are mostly unkind and another 5% who say their answer depends on the situation. 68% of SNS users said they had an experience that made them feel good about themselves. 61% had experiences that made them feel closer to another person. (Many said they had both experiences.) 39% of SNS-using adults say they frequently see acts of generosity by other SNS users and another 36% say they sometimes see others behaving generously and helpfully.

Pepsi to Skip Super Bowl Ads in Favor of $20M Social Media Campa The Super Bowl is consistently one of the most-watched television programs of the year. Even as network television viewership continues to erode — thanks to cable, timeshifting and Internet options — advertisers are still willing to pay big ad dollars for a spot on Super Bowl Sunday. That could be changing. Mizuko Ito Mizuko Itō or Mizuko Ito a.k.a. Mimi Ito (伊藤瑞子, Itō Mizuko?, born 22 July 1968, Kyōto, Japan) is a Japanese cultural anthropologist who is an Professor in Residence at the Humanities Research Institute at the University of California, Irvine.

Teens, kindness and cruelty on social network sites Social media use has become so pervasive in the lives of American teens that having a presence on a social network site is almost synonymous with being online. Fully 95% of all teens ages 12-17 are now online and 80% of those online teens are users of social media sites. Many log on daily to their social network pages and these have become spaces where much of the social activity of teen life is echoed and amplified—in both good and bad ways. 10 Rules for Increasing Community Engagement Getting people to interact with others and upload content to a community-driven site enough may sound easy, but engagement doesn’t happen automatically. It takes time and work, and much of the right formula is deduced through trial and error. Here are 10 tips for increasing user engagement that work for news community web sites, but can apply to all types of online user-engagement communities. 1.

Mimi Ito - Weblog Cross posted from the Connected Learning Research Network Leveling Up project blog It’s the start of a new year and time to take stock. It’s been three years since the launch of the Connected Learning Research Network and the Leveling Up project, and a year and a half since the launch of this blog. Along the way, we’ve delved into stories of knitters, boy band and wrestling fans, fashionistas, eSports enthusiasts, and game makers, as well as how the online world is supporting their learning, sharing, and civic engagement. The cases we’ve developed over these years have both confirmed many of the core values and principles of the connected learning model, as well as challenged them in some unexpected ways. Following from the digital youth project, we’ve found that the online world, even as it has expanded into more diverse areas of interests, platforms, and mobile devices, continues to be a rich source of not only social connection, but of peer learning.