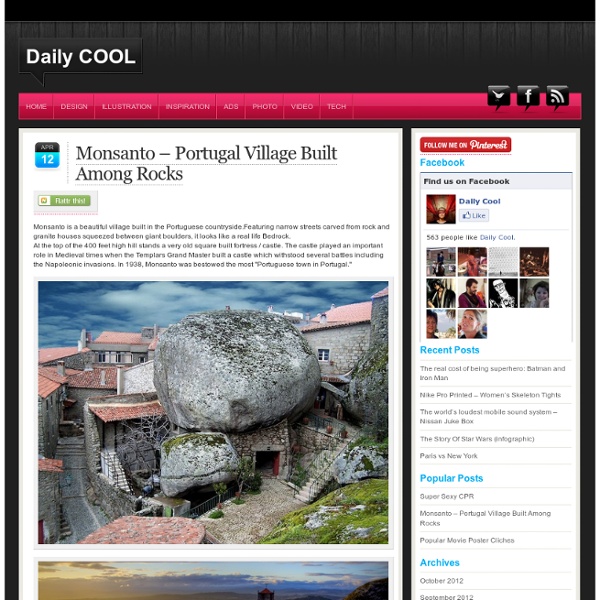 Monsanto is a beautiful village built in the Portuguese countryside.Featuring narrow streets carved from rock and granite houses squeezed between giant boulders, it looks like a real life Bedrock. At the top of the 400 feet high hill stands a very old square built fortress / castle. The castle played an important role in Medieval times when the Templars Grand Master built a castle which withstood several battles including the Napoleonic invasions. Related:  Urbanization

Superheated American City Dealing with 110 Degrees for 33 Days -- Phoenix Confronts Apocalyptic Climate Change Photo Credit: Shutterstock.com March 14, 2013 | Like this article? Join our email list: Stay up to date with the latest headlines via email. To stay on top of important articles like these, sign up to receive the latest updates from TomDispatch.com here. If cities were stocks, you’d want to short Phoenix. Of course, it’s an easy city to pick on. In Phoenix, you don’t ask: What could go wrong? And that’s the point, really. Phoenix’s pyramid of complexities looks shakier than most because it stands squarely in the crosshairs of climate change. In Phoenix, it’s the convergence of heat, drought, and violent winds, interacting and amplifying each other that you worry about. If, in summer, the grid there fails on a large scale and for a significant period of time, the fallout will make the consequences of Superstorm Sandy look mild. In the summer of 2003, a heat wave swept Europe and killed 70,000 people.

Small Attic Loft Apartment In Prague The design of this modern loft conversion located in Prague, Czech Republic uses natural materials such as stone, brick and wood to enhance the flat and angular surfaces. Designed by architect Dalibor Hlavacek, the two-storey attic loft makes good use of limited floor space. The living room, kitchen, bedroom and bathroom are on the lower floor. The upper gallery, accessible via staircase and a steel footbridge, creates an intimate space for the study, which can also be used as a second bedroom. Via: ArchDaily Liquor-license moratoriums: NIMBY idiots are strangling great neighborhoods by blocking new bars and restaurants Photo by Andrew Burton/Getty Images An interesting thing happened in my neighborhood recently. A small posse of local busybodies organized as the Shaw Dupont Citizens Alliance proposed a moratorium on new liquor licenses for the increasingly vibrant nightlife corridors on 14th Street and U Street in Washington, D.C. Similar moratoria already constrain longer-established D.C. drinking hubs, and when I heard about the Shaw Dupont proposal, initially I felt despondent. Similar fights play out in cities all around the country but not always with the same happy outcome. My neighborhood is hardly the only nightlife cluster in urban America featuring a version of this controversy. Proponents of curtailing licenses typically cite local nuisance effects as the key reason. These complaints ought to be understood in the larger context of urban economics. In reality, there’s nothing particularly unusual about similar firms clustering together.

Cynicism Humorously Illustrated by Eduardo Salles Eduardo Salles (Mexico City, 1987) is advertiser, designer, illustrator, writer and professor at the Miami Ad School. And a professional procrastinator!, he says. Fallacy of the creative class: Why Richard Florida’s ‘urban renaissance’ won’t save U.S. cities It was an urbanist’s nightmare. On Feb. 1, a teenager was shot dead in the middle of a popular art gallery walk and street fair in Oakland, Calif. — a town that highlights exactly what a city wins and loses when it attracts a huge influx of the vaunted “creative class.” Kiante Campbell, an 18-year-old Oakland resident, was killed in the shadow of new condominiums, gourmet food trucks, and buffed art galleries selling oil paintings that cost more than a few months’ rent in the ’hood. The festival, Art Murmur, shuts down much of Oakland’s downtown on the first Friday of each month, drawing 20,000 people, including tourists from both San Francisco and the surrounding suburbs. Now its future was called into question. The shooting highlighted a stark reality: The creative class is remaking Oakland in its own image, but the “urban renaissance” isn’t benefitting everyone. By the urbanist creative-class metric, Oakland is winning. Those gains disappear.

40 Home Library Design Ideas For a Remarkable Interior Modern homes are not just about living rooms, the kitchen, bedrooms, the dining space or the bathrooms. While they do constitute the bare minimum, home owners across the world always wish to add an extra dimension to their homes — which not only makes the house unique and special, but also caters to the specific interests of those residing in it. From media rooms to stunning stone fireplaces, every single special element has been put in place to reflect their individual design choices and priorities. The latest and hottest trend is the advent of amazing home libraries. Bermuda blue home library housing a Chesterfield Sofa by Crisp Architects Home libraries are considered not just a symbol of once aptitude, but rather they simply showcase how much you love your personal book collection and the amount of care and attention you give them. Books storage space for those who like to keep it light Inspiring home library for those who need loads of shelf space by Abramson Teiger Architects

Oakland is for Burning? Beyond a Critique of Gentrification : BayofRage Oakland is for Burning? Beyond a Critique of Gentrification Posted by OaklandCommune on Thursday, October 18, 2012 · Leave a Comment I’m not a nihilist, but I wish they would burn every fucking thing down except for the houses. So that people would begin to understand that we don’t need this system. - Bella Eiko, speaking to the Oakland City Council, during a vote called to ban “tools of violence” at political demonstrations, 2012 During the Summer [of 1966], there were rumors in the Oakland ghetto that Molotov cocktails were being manufactured in empty garages; that arms caches had been discovered; and that new tactics based on a study of Watts were being taught to young Negro militants, stressing the folly of burning their own homes and shops in the ghetto, and urging that their protest would be more effective if they burned City Hall, the business district, and the homes of the Whites on the hillside. Make no mistake: Oakland has changed drastically over the last few years.

PHILOSOPHY POSTERS by Max Temkin Philosophy is the study of general and fundamental problems, such as those connected with existence, knowledge, values, reason, mind, and language. Philosophy is distinguished from other ways of addressing such problems by its critical, generally systematic approach and its reliance on rational argument. The word “philosophy” comes from the Greek φιλοσοφία (philosophia), which literally means “love of wisdom“. In this case, Max Temkin, the artist, wanted to create posters with quotes that motivated people to think ‘different‘. More about Max Temkin’s philosophy posters Also check out AMAZING SLEEPING BABIES PHOTOGRAPHY and MAPPING STEREOTYPES

The Big Squeeze: Can Cities Save The Earth? : Krulwich Wonders... Let's get dense. If we take all the atoms inside you, all roughly 70,000,000,000,000,000,000,000,000,000 of them, and squeeze away all the space inside, then, says physicist Brian Greene: Steve Goodwin/iStockphoto.com That's a very tight fit. So tight that in real life, it couldn't happen. It's not physically possible. They are apartment towers in Hong Kong. ... well, that's not exactly true. ... towers of them next to towers next to more towers ... ...without end ... ... and as I look at Michael's pictures (while sitting in my box-like apartment in New York under somebody else's apartment, surrounded by similar apartments, left and right of me, up and down the block), I'm thinking, "OK, this not be the most beautiful, and certainly not the most natural way to live, but modern cities allow enormous numbers of people to spend their lives in extraordinary close proximity, piling them, literally, on top of each other, and somehow, it works! Well, maybe. Would it cover half a continent?

Embracing the Urban-Nature Ethic As I walk along the Los Angeles River on a cool fall afternoon, I gaze across a graffiti-ridden concrete embankment and imagine what this landscape must have looked like less than 100 years ago. The LA River today, which dumps the area’s urban runoff directly in the Pacific Ocean, serves as a paved flood control channel for the city. It carries litter, bacteria and other nasty pollutants from the streets of LA straight into the nearby sea, without ever being treated. This is certainly not the type of roaring river I grew up appreciating in the wilds of Montana, but it is rugged in its own right. The engineers that designed this industrial behemoth missed the ecological boat when they drew up plans to channelize this once expansive waterway. The legendary Olmsted Brothers were two men who envisioned something starkly different for the LA River than what exists now. One could blame manifest destiny on the developers’ innate greed and government backing for what happened to the LA River.