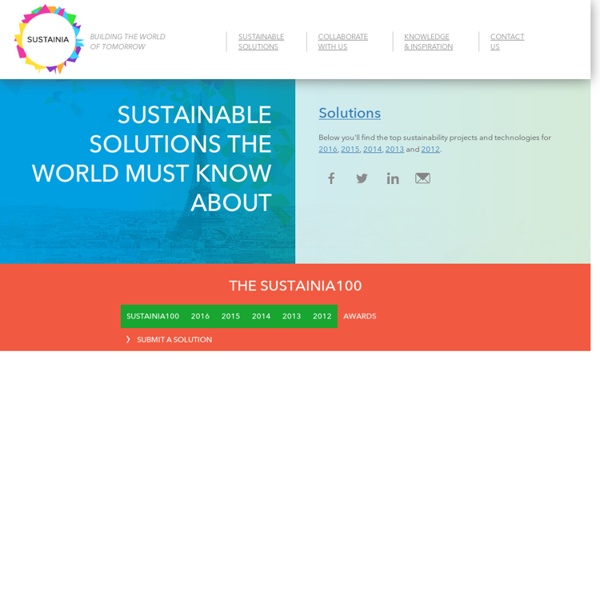 Sustainia100 2016 This is the year of ‘Systemic Opportunity’! Now in its fifth year, the Sustainia100 has tracked more than 4,500 solutions to date from all over the world. This year’s edition features solutions deployed in 188 countries, and more than half come from small and mid-sized enterprises. Showcasing everything from health solutions that tackle climate change, to renewable energy products that alleviate gender inequality, this year’s publication presents 100 solutions that respond to interconnected global challenges and help achieve the Sustainable Development Goals. Solutions you must know about! Celebrating the TOP10 sustainability solutions and project of 2015. Be inspired! Get inspired by real solutions! The 2015 Sustainia100 study features 100 new stories from the forefront of sustainability innovation. The Sustainia100 is a FREE publication! SUSTAINIA100 is an annual guide to 100 innovative sustainability solutions from around the world. Be Inspired! Related:  Across all Environments

Three dead and more missing after east coast storms – rolling report | Australia news NSW police and the State Emergency Service are at a loss as to what more can be said and done to get the message across about the dangers of entering flood waters. Police and emergency services this morning recovered the bodies of two men from waterways at Leppington and Mittagong. The acting assistant commissioner, Kyle Stewart, said despite the constant warnings about the dangers of entering flood areas we now have two men who have died. “It is a tragedy these two lives have been lost. “What do we have to say to get the message across? “Flood waters are deadly – we can’t put it any other way.” Emergency service personnel are frustrated at the number of flood rescues conducted over the weekend, which tied up valuable resources because of warnings about entering flood affected areas being ignored. Some of the flood rescues since Friday include four teenagers from the surf at Stockton and two tourists from the water at Foster yesterday.

Q & A con Christchurch CRO Mike Gillooly | 100 ciudades resilientes - Fundación Rockefeller When Mike Gillooly became the first Chief Resilience Officer of Christchurch, New Zealand, earlier this month, he hit the ground running. He had to -- in the last few years, New Zealand’s second-largest city has been beset by a series of devastating natural disasters, including two major earthquakes that caused massive destruction in the city center, and heavy rains resulting in widespread flooding. While Gillooly may be new to 100 Resilient Cities, he’s spent the last few years rebuilding his city and making it safer for the future. A trained surveyor, he spent the first part of his career in land development engineering and urban planning. When the back-to-back quakes hit in 2010 and 2011, he was reassigned to focus on the recovery effort, coordinating with organizations including the Ministries of Building Innovation and Employment and the Insurance Council of New Zealand. Resilience needs to be community-driven if it is to be relevant. And how have things changed since then?

Green LECRDS Guidance Manuals and Toolkits Photo: Frances Lim UNDP has been producing a series of manuals, guidebooks and toolkits that draw upon the experience and information generated by UNDP’s support for climate change adaptation and mitigation projects and National Communications to the UNFCCC in some 140 countries over the past decade. They are intended to enable project managers, UNDP Country Offices, and developing country government decision-makers to acquaint themselves with a variety of methodologies most appropriate to their development contexts in support of the preparation of LECRDS. In a flexible and non-prescriptive manner, they offer detailed step-by-step guidance for the identification of key stakeholders and establishment of participatory planning and coordination frameworks; generation of climate change profiles and vulnerability scenarios; and identification and prioritization of mitigation and adaptation options. Step 3: Identify Strategic Options Leading to Low-Emission Climate-Resilient Development

ZOOM: Home Review of Human-to-Human Transmission of Ebola Virus | Ebola Hemorrhagic Fever This document is a summary of the current published science about human-to-human transmission of Ebola virus. It was developed for use by healthcare personnel and public health professionals. It complements other CDC guidance documents issued on CDC’s Ebola website. Introduction Ebola virus infection causes severe viral hemorrhagic fever with a high case fatality. Evidence Summary Evidence and understanding of Ebola virus transmission is based on epidemiologic and laboratory data, summarized below, including investigations of >20 African outbreaks since 1976.5 Epidemiologic Data The risk of Ebola virus transmission from direct skin contact with an Ebola patient is lower than the risk from exposure to blood or body fluids but may be more likely in severe illness (when the Ebola virus RNA levels are highest). Laboratory Data The maximum recorded persistence of Ebola virus RNA in the blood and other body fluids of convalescent Ebola patients varies by fluid type, but data are limited. Summary

Briefing Paper - Fighting climate change: A structural shift towards renewable energies requires concerted policy action - The Finnish institute of International Affairs Published 21.3.2012 Patrick Matschoss The Finnish Institute of International Affairs Download PDF (2.71 Mb) Renewable energies will be the major contributor to any future low carbon energy system and the share may be as high as nearly 80% of the world’s energy supply by 2050. Renewable energies have vast potential but require a set of coherent policies to reach necessary deployment rates, because the market place neither accounts sufficiently for their climate change-related and wider benefits nor for the benefits of technological learning, making them appear less competitive than they really are. Renewable energies can be integrated in all supply systems and end-use sectors but at some point they will require investment and change. Energy security would be enhanced by greater efficiency and a broader and less import-dependent energy portfolio with less vulnerability to energy price volatility.

Climate Centre - Training Welcome to our Climate Training Kit! Climate change is one of the main global issues of the 21st century and severely affects the lives of millions of people. Red Cross and Red Crescent societies around the world need to address these rising risks. This kit is designed to help trainers within the Red Cross Red Crescent design their trainings or workshops on climate risk management. Please read the user guide before using the Climate Training Kit Products for more information on what this kit can offer you. We are grateful for the (financial) support of the Canadian Red Cross, which enabled the development of the Climate Training Kit.

Emergency Portal The National Security Hotline is the single point of contact for the public to report possible signs of terrorism. It also provides information to callers on a wide range of national security matters. Visit nationalsecurity.gov.au or call the National Security Hotline on 1800 123 400 For information regarding state security and terrorism in Victoria, please click here For emergencies where immediate police, fire or ambulance assistance is required, call Triple Zero (000) Contact your local police station via phone or in person to report non-emergency crime incidents. Details for your local police station can be found at police.vic.gov.au If you have any information regarding a crime, or criminal activity, you can confidentially report what you know by calling Crime Stoppers on 1800 333 000 or by visiting crimestoppersvic.com.au VicEmergency is Victoria's primary website for incident information and warnings. Visit emergency.vic.gov.au

Related:
Related:  Across all Environments