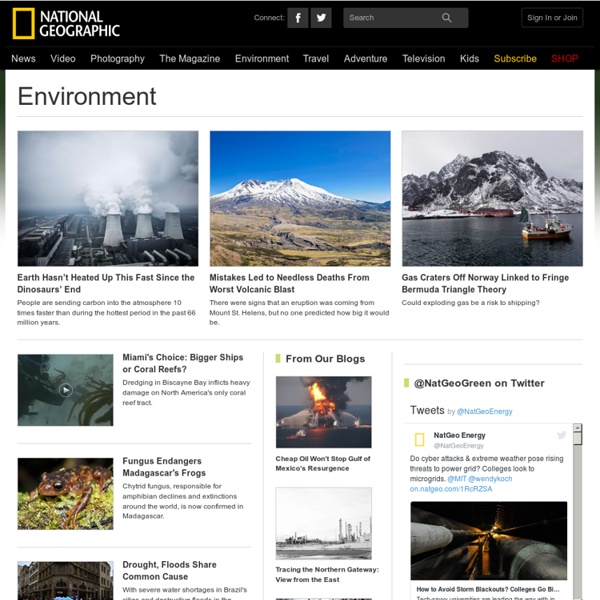 Environmental Campaigns | A Billion Acts of Green The environment faces a multitude of challenges today. From climate change to species extinction, our planet and its inhabitants are continually facing man-made threats that must be averted. Lend your voice to a campaign, and help us work toward a sustainable future. Eat Less Meat Support Environmental Education Support Shaheen-Portman bill Rotator powered by <a href=" a free and easy <a href=" slider</a> builder from DWUser.com. Eat Less Meat The meat industry generates nearly one-fifth of the man-made greenhouse gas emissions worldwide. Support Environmental Education Did you know that Congress is currently in the process of setting the federal budget for the fiscal year 2015? Support Shaheen-Portman Bill Did you know the U.S. wastes more than 60% of the energy it produces annually? Reduce Energy Consumption Start Composting More than a billion pounds of food are thrown away every year.

An Organic Mattress Worth Investing in When looking for an environmental approach to your bedroom, recycling and organic should be the way to go. Bedding and mattresses are a huge issue in the landfills and coming up with a solution for this problem is a must. Beds can last twenty or more years, and I strongly suggest to take care of them properly. My suggestion if you are not a wealthy individual and can not afford to shop for an organic bed, is to purchase one second hand and properly clean and disinfect the mattress appropriately with an organic cleanser that has anti bacterial properties to the solution, and let it dry. One of the best investments in a book that I own and that I have discovered is called Green Leaders. I have located a few businesses offering a green bed to purchase, as well as other bedding such as sheets and pillows, but they are very expensive but with good reason. Hastens Hastens is a company that has been in business since 1852. Sweetdreamzzz Sweetdreanzzz has a product called natura.

Bukit Timah Nature Reserve - a precious remnant of primary rainforest Introduction Located in the centre-west of Singapore is a hill called Bukit Timah; with an official height of 164 metres or 538 feet this is the highest point in the country. Clinging to its slopes are Singapore's last vestiges of Primary Forest. For decades this forest has been protected as a Nature Reserve, however all may not be well at Bukit Timah. Urban Development The Bukit Timah Nature Reserve now stands totally cut off from the bulk of Singapore's regenerating secondary forest by a six-lane road development. Furthermore, what are the long term effects of the granite quarrying which has eaten away at the hillside for decades ? Amazing diversity Singapore is located in the middle of one of the world's biodiversity hotspots; in neighbouring Malaysia there are over 10,000 plant species (compared with around 1500 species, for example, in the United Kingdom). Perhaps the most dramatic of the dipterocarps is the Seraya Shorea curtisii. Delicate Ferns Spiky Rattans Flowering Plants

About Ecological Footprint Right now we consume the equivalent of 1.5 planets' worth of natural resources every year! Did you know that if everyone on the planet lived like the average American, we would need 5 Earths to sustain our lifestyle? Where does that number come from? By determining how many hectares of land humans need to support their lifestyle and comparing it to the amount of arable land found on the planet, scientists are able to measure the impact of human demand on the planet’s eco systems, which is called our ecological footprint. Globally, all humanity consumes the equivalent of 1.5 planets' worth of resources to sustain the way we live each year. This means that it takes the planet one and a half years to replenish everything humans consume in one year. Every year we recognize Earth Overshoot Day, an annual marker of when humans begin using more resources than the planet will be able to replenish.

Feminine Products That are Earth Friendly Many environmentalists are speaking about the landfill issues of diapers. It is on the news, green sites, and many people speak of the diaper problem continuously. Diapers are not the only form of a throw away object that does not decompose fast enough. Feminine hygiene products such as maxi pads and tampons are being found on beaches. Environmental choices for feminine products do exist, but are not being spoken about enough, nor are they being sold in regular grocery stores or pharmacies as they should be. Here is a list of a few options to consider. The Diva Cup If you already use tampons, and do not enjoy using pads, the Diva Cup is recyclable and can be reused after washing them. Wemoon A natural pad made out of organic fabric is available from this Australian based company. Organic Pads That Compost Another option available although supplies are very limited through this organization, is pads you can compost.

Kids Sue Over Climate Change And A Judge In Wash. State Is Listening Kids packed a courtroom in Seattle on Tuesday to hear oral arguments in a case about their future. Eight young teenagers are the plaintiffs in a lawsuit against the state Department of Ecology. They want to force action on climate change. “It just feels like there’s not enough people who care about, like, animals and other things that can’t talk for themselves – babies who haven’t been born yet, people from the future, basically,” said 13-year-old Lara Fain. She’s one of the plaintiffs in the lawsuit, which says the State Department of Ecology isn’t doing enough to limit the carbon pollution that causes global warming. 15-year-old Aji Piper agrees. “It is my future,” he said. Their arguments are part of the lawsuit filed in Washington, one of dozens of suits filed and actions taken in every state and against the federal government, by a non-profit called Our Children’s Trust. Julia Olsen is the group’s Executive Director. “That these young people have the right to a healthful environment.

Rainforest Preservation Benefits The Disappearing Rainforest (Source: Raintree) We are losing Earth's greatest biological treasures just as we are beginning to appreciate their true value. Rainforests once covered 1-4 percent of the earth's land surface; now they cover a mere 6 percent and experts estimate that the last remaining rainforests could be consumed in less than 40 years. One and one-half acres of rainforest are lost every second with tragic consequences for both developing and industrial countries. Rainforests are being destroyed because the value of rainforest land is perceived as only the value of its timber by short-sighted governments, multi-national logging companies, and land owners. Nearly half of the world's species of plants, animals and microorganisms will be destroyed or severely threatened over the next quarter century due to rainforest deforestation. Experts estimates that we are losing 137 plant, animal and insect species every single day due to rainforest deforestation. The U.S. The Amazon River