How Often Should I Charge My Gadget's Battery to Prolong Its Lifespan? 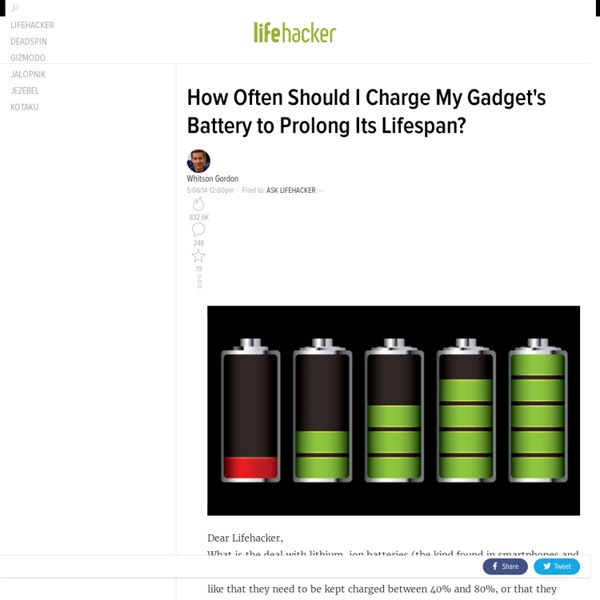 Some iPad Management Tips We have FINALLY gotten cases for our iPad 2s! Hooray! In honor of these new accessories, I wanted to share some quick iPad management tips with everyone: 1 - Color code your iPad cases for easy 1:1 access We have 5 students at each table and have assigned each seat a color. 2- Create desktop backgrounds to show numeration The cases cover the backs - where we originally had numerated stickers showing which iPad was which. I did it this way - rather than creating the image on the iPad - for two reasons. 3 - Create shortcuts to frequently visited sites (Study Island, Class Google Site, etc) Open your iPad's Safari app and type in the URL of the site that you'd like to visit. 4 - Create differentiated folders for apps Group your apps into folders based on level. 5 - Try "Send to Dropbox" Instead of flooding your inbox with student work emails every day, try Send to Dropbox, a site that allows your students to send to a generated address which dumps files into your dropbox folder.

How To Save Images in the iPad Safari and Mail Apps Here’s another basic but very handy tip for those of you who are new to the iPad. You may often receive a photo in an email that you want to save and keep on your iPad – or spot an image in a web site that you’d like to save. It’s very easy to do this on the iPad – hit the lovely little read more link to see how … To Save an Image in an email, within the iPad’s Mail Application – Tap and hold the image within the email. To Save an Image on a Web Page in the iPad Safari Application – Same as above really. It’s as easy as that. The following two tabs change content below. Founder and Editor in Chief of iPad Insight.

10 Things You Never Knew You Could Do On Your iPad — Apple News, Tips and Reviews 10 extremely awesome iPad tips and tricks | 11 of 11 As you're most likely aware of, there are some default apps on the iPad that are there to stay. They can't be deleted, but they can all be moved into a group... that is, all but one: Newsstand. Yes, this annoying app (to me, at least) is never used by many iPad users, yet Apple's made it such that you cannot delete it or even put it in a group. Fortunately, there's a bit of a workaround for placing it in a group, though doing as such will make Newsstand lose functionality until removing it from the group (which doesn't matter, because you want it gone in the first place). From your home screen, long-press an app to get the apps to jiggle. Since I don't ever use any of the default apps (outside of the App Store, iTunes, and Game Center), I have an app group titled "Default Apps." Need gadgets or gift ideas?

50 really useful iPad 2 tips and tricks An absolute gem of an article by John Brandon and Graham Barlow from MacLife on 30th March over at TechRadar. This is going to become my iPad manual from here on in. Customised iPads for all iPad 2 tips and original iPad tips - get 'em here! With great new features like two video cameras, a faster processor and a thinner design, the iPad 2 is the world's best tablet device. iPad 2 review It's also fully capable of running the latest version of Apple's iOS operating system and great apps like iMovie and GarageBand. 1. iOS now supports folders. 2. Double-clicking the Home button shows you all the apps that are running on your iPad in a bar along the bottom of the screen. 3. The internet got mightily upset when Orientation Lock was replaced with Mute on the iPad during the last iOS update. 4. If you're carrying around sensitive data, you can now enable a feature that'll erase all the data on the device if someone inputs the incorrect passcode 10 times. 5. 6. 7. 8. 9. 10. 11. 12. 13. 14. 15.

Classroom iPod touches & iPads: Dos and Don'ts Do delete content. Since you are mirroring the computer's iTunes Library onto the iPods, deleting items from iTunes will delete them from the iPods. After you no longer have a need for a podcast, video, or audiobook, delete it so it is not taking up room and cluttering up the iPods. Do configure the Music app for easy access to playlists and podcasts.

Myths about iOS, iPad, iPhone & iPod touch I have the pleasure of working with educators who get to use iPads and iPod touches with students. Wherever I facilitate workshops, I find there are some myths floating around about Apple's iOS devices, and I'd like to clear up some of the misinformation. iPad, iPhone, and iPod touch do not have user manuals. Gone are the days when you receive a thick printed user manual with your electronics purchase. iPad User Guide: PDF or iBooksiPhone User Guide: PDF or iBooksiPod touch User Guide: PDF or iBooks You have to have a credit card associated with your iTunes account. A credit card is not required when you create an iTunes account. First log out of any iTunes accounts you might be signed into. If you have already given iTunes a credit card number, you can log into your account and click to edit your payment information. You can buy an app once and install it on all devices in the classroom or school. The Volume Purchase Program is only for paid apps. You need a Mac to sync multiple devices.

How to Open Zip File and Email Attachment on iPhone and iPad It’s uncommon you receive email with an attachment in zip format. Or you want to download a zip file while browsing the web. The built-in Mail app or Safari browser, however, is not capable to unzip the compressed file. So how can you open a zip file on iPhone or iPad? If you’ve purchased GoodReader or Air Sharing, both apps already come with the zip feature to uncompress any zip files or email attachment. Open Email Attachment in Zip Format You can grab the app from App Store via this direct iTunes link. Open Zip File in Safari Winzip also works in mobile Safari browser. Not only it can unzip the archive file, the app lets you view the contained documents in the following formats: Word documents (.doc, .docx)Excel spreadsheets (.xls, .xlsx)PowerPoint presentations (.ppt, .pptx)PDF files (.pdf)Photos and images (.jpg, .jpeg, .png, .bmp, .gif, .tif, .tiff)Text files (.txt)Rich Text Format (.rtf)Keynote (.key)Numbers (.numbers)Web files (.htm, .html, .jsp) Pages (.pages) About Simon Ng

50 really useful iPad tips and tricks With great new features like two video cameras, a faster processor and a Retina display, the new iPad is the world's best tablet device. It's also fully capable of running the latest version of Apple's iOS operating system and great apps like iMovie and GarageBand. Here we present 50 really useful iPad tips. 10 best tablet PCs in the world today The vast majority of these tips will also work on the original iPad and iPad 2, so owners of any generation of iPad shouldn't feel neglected. For 50 more iPad tips, check out a new iPad app called 100 Tricks & Tips for iPad 2, brought to you by our colleagues on MacFormat. 1. iOS now supports folders. Your iPad will create a folder with both the apps in. 2. Double-clicking the Home button shows you all the apps that are running on your iPad in a bar along the bottom of the screen. 3. The internet got mightily upset when Orientation Lock was replaced with Mute on the iPad during the last iOS update. 4. 5. 6. 7. The iPad supports a VPN connection. 8.

The Complete List of iPad Tips, Tricks, and Tutorials The Apple iPad is an amazing tablet, and to help you get the most out of it, we’ve put together a comprehensive list of every tip, trick, and tutorial for you. Read on for more. Note: This article was originally published earlier this year, but we’ve updated it with a real lot more content since then, so we’re republishing it for you. We’ll be keeping this page updated as we find more great articles, so you should bookmark this page for future reference. How to Maximize Your iPad’s Battery Life So you got yourself a shiny new Apple device, but you’re so addicted that the battery is running out way too soon—what you need is a couple of tips to keep your battery running for as long as possible, and we’ve got them here. How to Maximize Battery Life on Your iPad, iPhone, or iPod Touch How to Lock the Screen on Your iPad with iOS 4.x How to Lock the Screen Orientation on Your iPad (with iOS 4.2) How to Pause an iPad App Install How to Force Reboot and Quit Apps Multitasking on the iPad iPadPeek