Active Wild: Arctic Animals. The Arctic is a hostile environment, yet the species on the following Arctic animals list are able to thrive either on the tundra or in the icy waters that surround the North Pole. 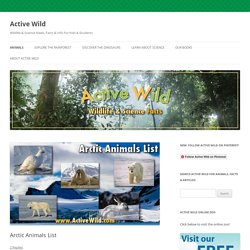 Many Arctic animals have evolved special adaptations and behaviours to deal with the extreme cold and hostile environment. These include: thick, multi-layered coats; fur that changes color with the seasons; layers of fat for insulation; seasonal migration; and hibernation during the winter. This list of Arctic animals includes species that live within the Arctic Circle, and also those that live in the Subarctic – the area immediately below (south of) the Arctic. 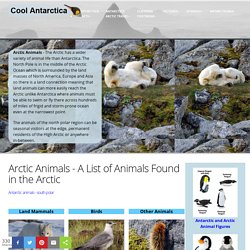 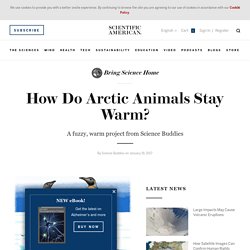 Animals such as the polar bear, Arctic wolf or Antarctic penguin are not so lucky to have such a place to keep warm. How do they face the extreme winter temperatures? Most grow “winter coats” in the fall. Did you ever wonder what these coats look like, and how they help keep animals warm? Background Warm-blooded mammals—including humans—use part of the energy they get from the food they eat to keep their bodily temperatures relatively constant. Humans use clothes to keep themselves warm—and they need even more layers of clothing the colder it is. The first coat is often a layer of fat hidden under the skin called “blubber.” Ready to feel the insulating capacities of these materials? 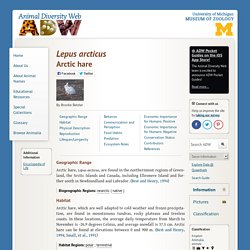 (Best and Henry, 1994) Habi­tat Arc­tic hare, which are well adapted to cold weather and frozen pre­cip­i­ta­tion, are found in moun­tain­ous tun­dras, rocky plateaus and tree­less coasts. In these lo­ca­tions, the av­er­age daily tem­per­a­ture from March to No­vem­ber is -26.9 de­grees Cel­sius, and av­er­age snow­fall is 37.5 cm. Coastal Range elevation 0 to 900 m 0.00 to 2952.76 ft Phys­i­cal De­scrip­tion. Arkive: Arctic hare - Lepus arcticus. An omnivorous species, the Arctic hare’s diet is mostly composed of woody plants such as Arctic willow (Salix arctica) (1) (3) (9), as well as grasses, herbs, berries, buds, shrubs and lichens (4) (9). 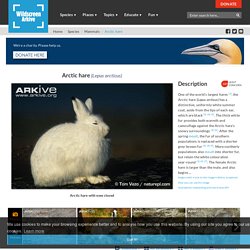 An opportunistic feeder, the Arctic hare may also eat small animals and carrion (3). This species has an acute sense of smell, which enables it to locate and dig for food in the snow (4) (9). The Arctic hare runs erratically and leaps while running away from a predator to try and escape (5) (6), sometimes reaching speeds of up to 60 kilometres per hour (5). Its low body fat content and long legs compared with its body size, give it a highly efficient form of locomotion (5). The Arctic hare is mostly solitary. Arctic National Park Service: Ground Squirrel. Arctic ground squirrels are the largest and most northern of the North American ground squirrels. 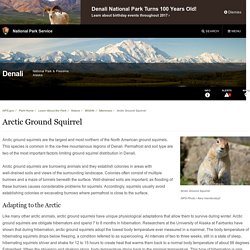 This species is common in the ice-free mountainous regions of Denali. Permafrost and soil type are two of the most important factors limiting ground squirrel distribution in Denali. Arctic ground squirrels are burrowing animals and they establish colonies in areas with well-drained soils and views of the surrounding landscape. Animal Diversity: Musk oxen - Ovibos moschatus. Ge­o­graphic Range Ovi­bos moscha­tus is a cir­cum­po­lar species na­tive to Canada, Green­land, and up until the late 1800's, Alaska. 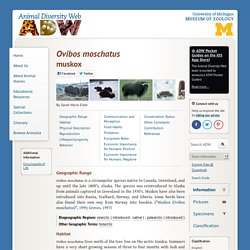 The species was rein­tro­duced to Alaska from an­i­mals cap­tured in Green­land in the 1930's. Arkive: Musk oxen (Muskox) - Ovibos moschatus. The muskox is well adapted to the cold, and is one of the few large mammals capable of living year-round in the severe Arctic environment. 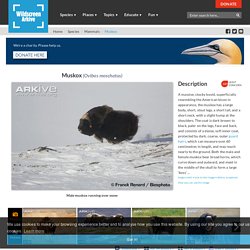 The thick coat provides excellent insulation, and the short, stocky legs and large, rounded hooves help the muskox to move through snow (4), although it is not that well adapted to digging through heavy snow for food and so is generally restricted to areas with shallower snow (1) (3) (7). The diet consists mainly of grasses and sedges, as well as browse such as willow and crowberry, and some forbs. Predators include wolves and bears, and the muskox has a characteristic defence behaviour, in which the herd bunch together, often forming an impenetrable line or circle, with the calves inside and the adults’ sharp horns facing outwards (2) (4) (5) (6) (7). A social species, the muskox typically forms mixed herds of around 10 to 20 animals, or sometimes as many as 100, although males can also be found alone or in separate bachelor herds.

How Stuff Works: Polar bears. Polar bears have captivated humans since the beginning of recorded time. 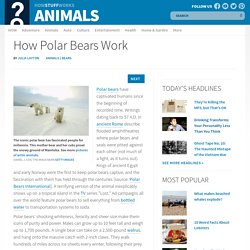 Writings dating back to 57 A.D. in ancient Rome describe flooded amphitheatres where polar bears and seals were pitted against each other (not much of a fight, as it turns out). Kings of ancient Egypt and early Norway were the first to keep polar bears captive, and the fascination with them has held through the centuries [source: Polar Bears International]. A terrifying version of the animal inexplicably shows up on a tropical island in the TV series "Lost. " Ad campaigns all over the world feature polar bears to sell everything from bottled water to transportation systems to soda. Polar bears' shocking whiteness, ferocity and sheer size make them icons of purity and power. ­­

In the Arctic, polar bears are at the top of the food chain, and it's not just because of their size. What's life like for an animal that needs such extreme cold to survive? National Geographic Kids: Polar bears. Ready for an icy adventure, gang? 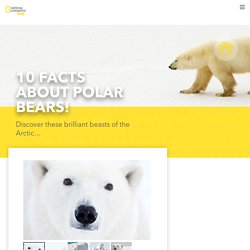 Here at National Geographic Kids we’re heading north – far north! – to meet one of nature’s toughest animals in our 10 facts about polar bears! 1) Polar bears are found in the frozen wilds of the Arctic, in Canada, Alaska (US), Greenland, Russia and Norway. 2) These are seriously big bears, gang. National Wildlife Federation: Polar bears. Genus: Ursus Species: maritimus General Description: Polar bears are large bears. They have strong legs with large, flattened feet with some webbing between their toes that help with walking on ice and swimming. The wide paws prevent sea ice from breaking by distributing weight while walking. Mental Floss: Reindeer.

Beyond their sled-pulling capabilities and discrimination towards those with red noses, what do you really know about reindeer? 1. Reindeer and caribou are the same thing.