Art and technique of sound design 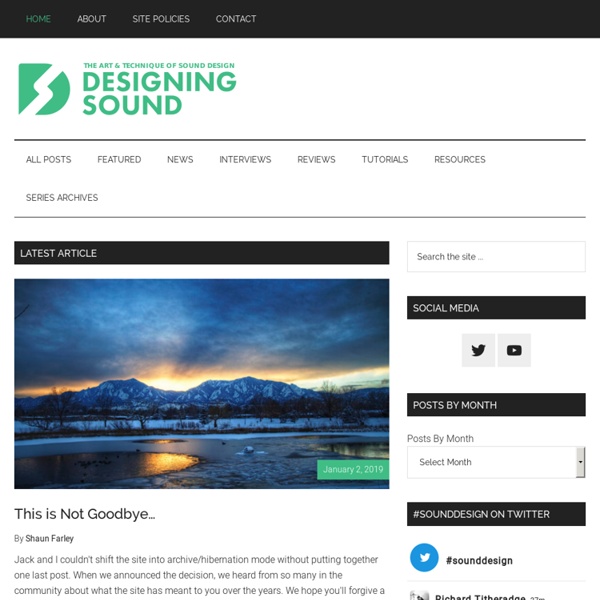 Bit short notice but if you’re in NYC on April 19 there is a pretty cool master class happening: “On Saturday, April 19th, come join us at the Media Center to watch the Academy Award winning film GRAVITY with master sound designer, Skip Lievsay. We’ll have lunch together and Skip will walk you through his experience working on GRAVITY. Skip Lievsay has an outstanding history of collaborating with major American filmmakers such as Martin Scorsese, Spike Lee, the Coen Brothers, and John Sayles. “

Susan Philipsz - Artists - Tanya Bonakdar Gallery Over the past two decades, Susan Philipsz has explored the psychological and sculptural potential of sound. Using recordings, predominantly of her own voice, the artist creates immersive environments of architecture and song that heighten the visitor’s engagement with their surroundings while inspiring thoughtful introspection. The music Philipsz selects – which has ranged from sixteenth century ballads and Irish folk tunes to David Bowie’s Ziggy Stardust – responds specifically to the space in which the work is installed. While each piece is unique, the storylines and references are often recognizable, exploring familiar themes of loss, longing, hope, and return.

Vespers Sometimes the most rewarding production tricks or techniques are the simplest ones. Certainly they are often the ones that yield the most “happy accidents,” the term I use for when experimentation yields something that rocks. Over the next while, I’m going to go through some of my go-to tricks for inspiration from unlikely sources – the often overlooked, sometimes misunderstood, always unappreciated devices in Live’s catalog. GameAudioMix June happens to be Dynamic Range month over at Designingsound – so I thought I’d look again at an old piece of writing I did a couple of years ago called Dynamics of Narrative for Gamasutra. Upon re-reading it, it feels nearly there, nearly putting its finger on the issue and essence of sound design itself. Who or what does sound design serve? What makes a good soundtrack or mix? What is the process needed in order to achieve these things? On the whole, I’ve found it quicker to map an overall ‘intensity’ when collaborating, rather than to break things down into sound, music and dialogue – as they all tend, with a few rare exceptions, to follow the same curve.

The Guide To Sound Effects I like to think of such sounds as having two general components: a ‘defining’ one, and an ‘impact’ one. The defining one is what sounds up front and tells the listener what the sound is, especially if combined with picture. The impact one can be anything at all, designed only to pump up the sound to hyper-real. For defining sounds, simply record what things really are: For a face slap for example, record a real slap, hand clap, slap on thigh, etc.

HTG Explains: What Are the Differences Between All Those Audio Formats? Digital audio has been around a very long time so there’s bound to be a plethora of audio formats out there. Here are some of the more common ones, what differentiates them, and what to use them for. Before we talk about everyday audio formats, it’s important you understand the basics, and that means understanding PCM. After that, we’ll tackle compressed formats. Audio-Video & Communication Catalog Google+ Weekly Promo Codes: Phone: (904) 683-5553 | School PO's accepted via Fax: (814) 690-3776 | Contact Form Store Information & Help | Textbook & Blog | Discounts & Wholesale Pricing

One Note Techno John Selway In the second installment of Techno Fundamentals, electronic music producer and Dubspot instructor John Selway looks at the “one note lead” idea using Ableton Live‘s Analog instrument. Commonly used in techno and other styles of electronic dance music where melody takes a backseat to rhythm, the “one note lead” is a simple yet very effective composition technique. Just in case you missed the previous tutorial, More Than A Bassline, check it out here, and do stay tuned for part three. Continuing where I left off in the first Techno Fundamentals tutorial, in this new installment I’m demonstrating another take on the idea of starting with a very simple musical element that, with a few precise sound design techniques and real time control, becomes a major element and source of energy for a track.

Music of Sound I’ve had three different threads of ideas crossover in different ways today – all related, but from different angles… In reverse order, this from Marc at Disquiet made me smile: I’m very sure you could do the exact same with film scores – in fact it is the curse of the temp score. With the film I recently scored, One Thousand Ropes, I was blessed that the director did not want a temp score at all – he was happy to edit without music until such time as original music was available. Comparatively I worked on a film (as sound designer) a few years back where the temp score was so good the music editors had basically made it impossible for the poor composer to do better, borrowing from 50+ years of iconic film scores to pastiche a genius but irrepalceable score.

Chuck Russom Special: Gun Sound Design Posted by Miguel Isaza on Thursday, April 29, 2010 · 11 Comments I work on a lot of games that are filled with guns. Over the years, through experimentation, screwing up, listening to movies/games with great guns sounds, and tips from other sounds designers, I’ve been able to create a process that works well for me. The biggest influence on my gun sound design has not come in the studio, but on the gun range. I’ve shot a lot of guns. I’ve also been around a lot of guns while they were being fired. Tele-Present Water by David Bowen visualizes intensity and movement of the water in a remote location #maxmsp #arduino Created by David Bowen, Tele-Present Water installation draws information from the intensity and movement of the water in a remote location. Wave data is collected in real-time from National Oceanic and Atmospheric Administration (NOAA) data buoy station 46075 Shumagin Islands Alaska. The wave intensity and frequency is scaled and transferred to the mechanical grid structure resulting in a simulation of the physical effects caused by the movement of water from this distant location. The installation uses MAX/MSP to drive an Arduino mega running servo firmata.

Music Theory As of July 1, 2013 ThinkQuest has been discontinued. We would like to thank everyone for being a part of the ThinkQuest global community: Students - For your limitless creativity and innovation, which inspires us all. Teachers - For your passion in guiding students on their quest. Partners - For your unwavering support and evangelism. Parents - For supporting the use of technology not only as an instrument of learning, but as a means of creating knowledge.