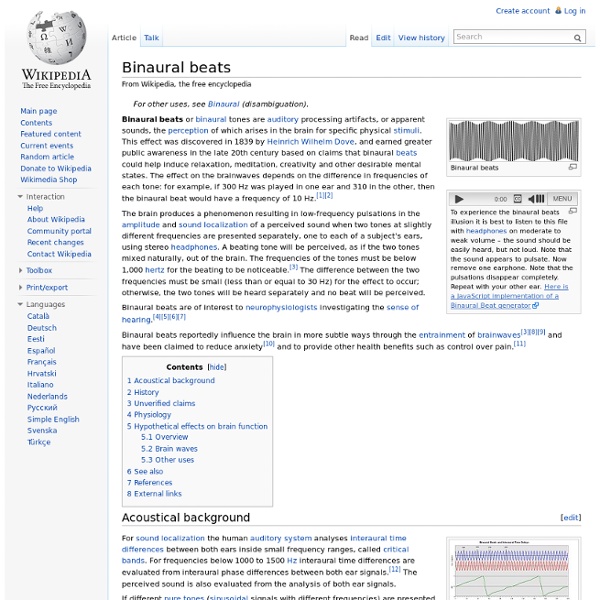 Binaural beats To experience the binaural beats perception, it is best to listen to this file with headphones on moderate to weak volume – the sound should be easily heard, but not loud. Note that the sound appears to pulsate. Now remove one earphone. Note that the pulsations disappear completely. Repeat with your other ear. The brain produces a phenomenon resulting in low-frequency pulsations in the amplitude and sound localization of a perceived sound when two tones at slightly different frequencies are presented separately, one to each of a subject's ears, using stereo headphones. Binaural beats reportedly influence the brain in more subtle ways through the entrainment of brainwaves[3][8][9] and provide other health benefits such as control over pain.[10][11] Acoustical background[edit] Interaural time differences (ITD) of binaural beats Binaural beats can also be experienced without headphones; they appear when playing two different pure tones through loudspeakers. History[edit]

Octave The octave has occasionally been referred to as a diapason.[2] Theory[edit] An example of an octave, from G4 to G5 For example, if one note has a frequency of 440 Hz, the note an octave above it is at 880 Hz, and the note an octave below is at 220 Hz. The ratio of frequencies of two notes an octave apart is therefore 2:1. Binaural Beats Choose a Binaural Beat to suit your mood from the below. Note that in order for Binaural Beats to work, they must be played though headphones. Basic Beats Deep Meditation Hangover Helper Roommate Annihilator Self Hypnosis Sleepy Time Super Focus!

Mind Reading: Jon Kabat-Zinn Talks About Bringing Mindfulness Meditation to Medicine Jon Kabat-Zinn, an MIT-trained molecular biologist, began meditating in 1966, when the practice was primarily the province of hippies and gurus, not scientists. Now, thanks in large part to his efforts, it has become mainstream medicine. Dozens of studies have since shown the benefits of what he termed Mindfulness-Based Stress Reduction (MBSR) in treating cardiovascular disease, depression, addictions, chronic pain and many other conditions. Kabat-Zinn has authored a new book, Mindfulness for Beginners that aims to introduce meditation to first-timers. Why did you first get involved with meditation? The one word answer would be karma.

The Benefits And Drawbacks Of An Over Active Creative Mind You’re a creative person. We all are. That’s one of the reasons we are designers. But, how many of us have heard from someone that we have an over active mind and we come up with too many ideas? 0:02 Inaudible High-Frequency Sounds Affect Brain Activity: Hypersonic Effect Abstract Although it is generally accepted that humans cannot perceive sounds in the frequency range above 20 kHz, the question of whether the existence of such “inaudible” high-frequency components may affect the acoustic perception of audible sounds remains unanswered. In this study, we used noninvasive physiological measurements of brain responses to provide evidence that sounds containing high-frequency components (HFCs) above the audible range significantly affect the brain activity of listeners. We used the gamelan music of Bali, which is extremely rich in HFCs with a nonstationary structure, as a natural sound source, dividing it into two components: an audible low-frequency component (LFC) below 22 kHz and an HFC above 22 kHz. Brain electrical activity and regional cerebral blood flow (rCBF) were measured as markers of neuronal activity while subjects were exposed to sounds with various combinations of LFCs and HFCs.

How to Exercise Your Eyes Expert Reviewed Two Parts:Preparing Your Eyes for ExerciseExercising Your EyesCommunity Q&A We all know how important it is to keep our bodies fit by keeping active and maintaining a regular exercise routine. But, did you know that you can exercise your eyes as well? Eye exercises are designed to strengthen your eye muscles, improve focusing, eye movements, and stimulate the vision center of your brain. While there is no scientific proof that eye exercises will improve your eyesight, they may help to counteract existing eye problems you may have and maintain your current eyesight level.[1]

0:01 The Power of Music: Mind Control by Rhythmic Sound New Orleans, October 16, 2012 – You walk into a bar and music is thumping. All heads are bobbing and feet tapping in synchrony. Somehow the rhythmic sound grabs control of the brains of everyone in the room forcing them to operate simultaneously and perform the same behaviors in synchrony. Medieval music Medieval music is Western music written during the Middle Ages. This era begins with the fall of the Roman Empire and ends sometime in the early fifteenth century. Establishing the end of the medieval era and the beginning of the Renaissance is difficult; the usage in this article is the one usually adopted by musicologists. Overview[edit] Instruments[edit] Genres[edit]