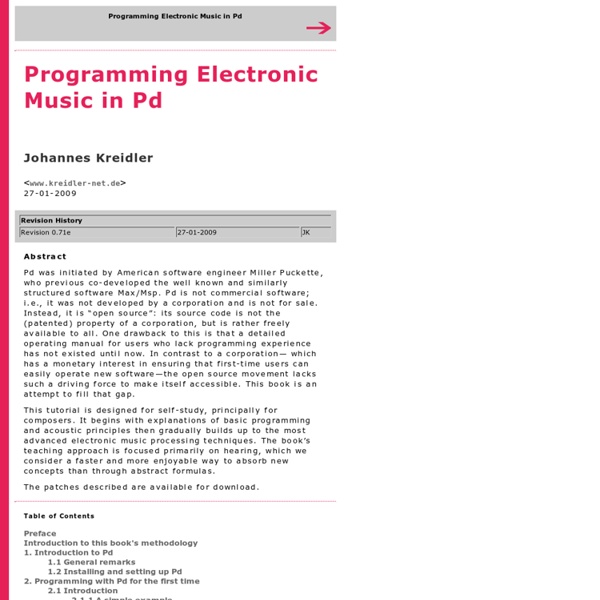 Abstract Pd was initiated by American software engineer Miller Puckette, who previous co-developed the well known and similarly structured software Max/Msp. Pd is not commercial software; i.e., it was not developed by a corporation and is not for sale. Instead, it is “open source”: its source code is not the (patented) property of a corporation, but is rather freely available to all. One drawback to this is that a detailed operating manual for users who lack programming experience has not existed until now. This tutorial is designed for self-study, principally for composers. The patches described are available for download.

Pure Data Since we'll be using Pure Data to create sound, and since Pd treats sound as just another set of numbers, it might be useful to review how digital audio works. We will return to these concepts in the audio tutorial later on. A diagram showing how sound travels through your computer. The "Analog to Digital" & "Digital to Analog Conversion" is done by the soundcard. The "Digital System" in this case is Pure Data. Source: Frequency and Gain First, imagine a loudspeaker. A microphone works in reverse - vibrations in the air cause its membrane to vibrate. Sampling Rate and Bit Depth To make audio playable on a Compact Disc, the computer must make 44,100 measurements (called samples) per second, and record each one as a 16-bit number. An example of 4-bit sampling of a signal (shown in red). Graphical depiction of a sine wave, which crosses zero from the negative to the positive domain. Speed and Pitch Control DC Offset Block Size