The Guide To Sound Effects 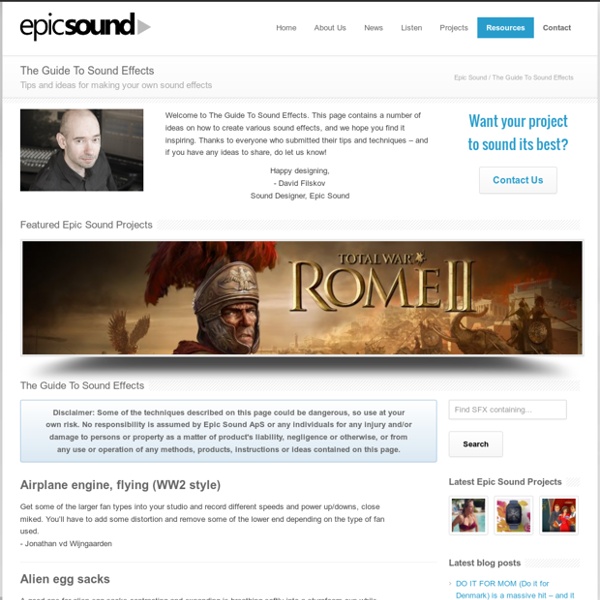 I like to think of such sounds as having two general components: a ‘defining’ one, and an ‘impact’ one. The defining one is what sounds up front and tells the listener what the sound is, especially if combined with picture. The impact one can be anything at all, designed only to pump up the sound to hyper-real. For defining sounds, simply record what things really are: For a face slap for example, record a real slap, hand clap, slap on thigh, etc. For a body kick, record a fist on chest thud, etc. For impact sounds, anything goes. Other purely impact sounds: kick drum, fist-pound on closet door (tapered), car door slam (tapered), kicked or stick-hit cardboard box, leather belt snap, whip crack, etc. In my opinion, especially what I’m loosely calling the “impact” component can and often should be gain-maximized and mixed with the “defining” so that the defining is still the part that gives the information as to what the sound is. - Clint Bajakian

Elf Ears, Custom-made in Silicone Rubber: 9 Steps (with Pictures) While costume shops have been selling foam latex pointed ears for some time, their generic one-size-fits-all shape means a standard and relatively bulky set of points which can never completely blend with a human’s natural earlobes. The extra-soft and porous nature of foam latex also means the ears are limited to a few applications before giving in to the stresses of repeated use. In this Instructable you will learn how to make your own custom-fit set of pointed elf ear appliances from two-part silicone rubber, a non-porous material which can be glued, applied, removed, cleaned, and reused many, many times. I have been using the same pair for a few years now, so if you are attentive and careful, your ears could last indefinitely.

Foley artist A Foley artist at work Foley is the reproduction of everyday sound effects that are added to film, video, and other mediums in post-production to enhance audio quality.[1] These reproduced sounds can be anything from the swishing of clothing and footsteps to squeaky doors and breaking glass. The best foley art is so well integrated into a film that it goes unnoticed by the audience.[2] It helps to create a sense of reality within a scene. Without these crucial background noises, movies feel unnaturally quiet and uncomfortable. Exclusive Interview with Diego Stocco, A “Sound Magician” You probably have heard about Diego Stocco, a composer and sound designer with a pretty particular way of creating sonic experiences mostly using rare instruments, found sounds and by doing special explorations of the sonic environment. He has done a lot of fantastic videos exploring different perspectives of field recording, sound design and experimental composition, actually creating its own instruments or using the whole environment as an instrument. He has recently finished a work called “Diego Stocco – Sound Magician” for DTS company, where he did small but interesting projects on exploring sonority and reality in a very interesting way. I recently did an interview with Diego for the Spanish site Hispasonic and he asked me if I could publish the interview in English as well so it can reach more people.

Writing for Orchestral Instruments Some composers still enjoy the amazing privilege of working with a live orchestra to record their work. Imagine having a 60-piece string orchestra just sitting in front of you, ready to play your latest composition. A full woodwind and brass section right there, waiting to do your bidding! So how do you create your musical ideas in such a way so that each part sounds perfectly tailor made and ‘just right’ for that instrument? How does the clarinet actually sound in a particular given octave range? Is this part going to be too low for the oboe? Painting silicone You may be trying to paint on silicone prosthetics, props, or you may just want to figure out a way to get paint to adhere to the silicone caulk that is sealing the edges of your exterior windows. Either way, the process is pretty much the same. Because paint doesn’t stick very well to silicone, certain preparation techniques are required to encourage paint adhesion. If you need to paint silicone rubber, you need to learn these techniques before you get started.

Music Thing: A Radio Sequencer, How to Get Into DIY Synth Modules, How to Have Fun Lured by the siren song of modular synthesis and DIY electronics, but not sure how to navigate the piles of requisite knowledge – or uncertain what the trip down this rabbit hole might have in store? For years, Tom Whitwell’s Music Thing was a beloved daily read, as that site and this one were among the early blog-format destinations for music tech. Tom moved on – something about a major day-gig at a paper called The Times, perhaps named after the font? – but that makes us all the more delighted to get a dispatch from him. In this guest column for CDM, he introduces one project, a brilliant FM radio sequencer, but also helps us catch up on reading on modular synthesis and electronics dating back to the origins of the technology. And he has a realistic look at what this will do to your life – all inspired by “pure enthusiasm,” as he puts it, “this is fun, you should try it.”

Discover Cockos REAPER REAPER (which stands for Rapid Environment for Audio Production, Engineering, and Recording) is an affordable DAW by Cockos - "a complete multitrack audio and MIDI recording, editing, processing, mixing, and mastering environment." Until recently it has only been available for Microsoft Windows, but there is now a beta Mac OSX version available. This article was previously published on the AudioJungle blog. We'll be bringing you an article from the archives each week. This is our sixteenth article in the series “Exploring Digital Audio Workstations”. Contact Us – Exchange The Science & Entertainment Exchange (The Exchange) is based in Los Angeles and has its offices on the campus of UCLA at the California Nanosystems Institute. All consultation queries should be directed to the LA headquarters of The Exchange. Rick Loverd, Program Director The Science & Entertainment Exchange, National Academy of Sciencesrloverd@nas.edu 844-NEED-SCI (844-633-3724)

Audio Mastering In Your Computer Many home recordists hope to perfect their productions by doing their own mastering on their studio computer. However, few seem to achieve the classy results they're after. So how much can you realistically achieve by going it alone, and what techniques will give the highest-quality results? Craig Anderton Carphone Warehouse Mobile Living Have you discovered the smarter world of music production on a tablet? If not, it's time to start: with their mobility, touchscreens and range of music apps, today's tablets are capable of turning into digital audio workstations that previous generations of musicians could only dream of. "The flexibility is amazing," says Carphone Warehouse's tablet expert Leon Andrews. "You can program in your own music and use the in-built synths to make that music into beautiful songs. You could knock out a tune on an hour's train ride, with drums, synthesisers, everything: some of the virtual instruments that come in these packages are amazing." If you're going to be producing music on your tablet, Andrews suggests, choose one with a fast processor.

20 Scientifically Backed Ways To De-Stress Right Now What's your stress "tell?" For some, a quickened heart rate or a slight feeling of queasiness is enough to let them know they're getting anxious or overwhelmed. But just as a slight from your boss or bad news from a family member can get your stress hormones pumping and your blood pressure rising quickly, you have the power to reset almost instantly. Jamie Grill via Getty Images The sexiness of ambient sound design: How inFamous: Second Son leverages next-generation audio Brad Meyer is the audio director on inFAMOUS: Second Son, and he’s excited about the possibilities that the next-generation systems offer developers. We don’t often talk about sound when we fantasize about what the extra CPU, GPU, and RAM will do for game development, but Meyer took the press through a series of demos about what is now possible in the game’s audio design. We stood in a small room covered in recording equipment and expensive looking microphones, as he played sounds and explained the complexity of the game’s audio.

Skaņu Mežs 2013 – dubstep veteran and bass music innovator Shackleton The musician Shackleton, originally from Lancashire but currently residing in Berlin, will perform during Skaņu Mežs rhythm music night in the concert hall Palladium on October 11. Shackleton first became known as one of the pioneers of dubstep, but in the last few years has caught the attention of the dance music world by experimenting with more unusual forms of bass music. Sam Shackleton, or just Shackleton as he is known, founded the record label Skull Disco together with colleague Appleblim. This label was for many years an indespensible part of the dubstep scene. Skull Candy also released Shackleton’s own records in which the development of his own music from more minimal techno, influenced by the project Muslimgauze, to music influenced by dub and more contemporary dubstep forms, is clearly visible.

thetalko 3.2K Shares We’re all freakin’ excited to grow up. Don’t deny it, we’re pretty sure you’ve once dreamed of having that amazing family, being a young parent a.k.a. the coolest mom that ever lived. So, there’s nothing wrong with these dreams. Growing up and adulting, it’s actually fun. You just need to get through the roughest parts of it and once you’re through, everything else will feel a lot easier, even when they’re really not.