Synth Secrets, Part 15: An Introduction To ESPS & Vocoders. Gordon Reid turns his attention to the effects that can be achieved when subtractive synthesis components are applied not to the output from oscillators, but to real-world sounds -- such as human speech. 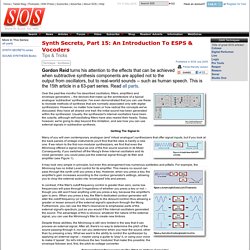 This is the 15th article in a 63-part series. Read all parts. Over the past few months I've described oscillators, filters, amplifiers and envelope generators -- the devices that make up the architecture of a typical analogue 'subtractive' synthesizer. I've even demonstrated that you can use these to recreate methods of synthesis that are normally associated only with digital synthesizers. Synth Secrets, Part 10: Modulation. In this month's instalment of his series on the basics of subtractive synthesis, Gordon Reid considers the magic ingredient that makes all the other elements sound interesting... 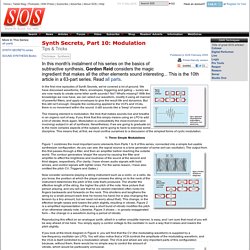 This is the 10th article in a 63-part series. Read all parts. Synth Secrets, Part 3: Modifiers & Controllers. Gordon Reid moves on from discussing the harmonic components of sound to explaining how they change over time, and some of the tools subtractive synths give you to emulate this process. 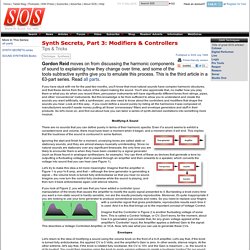 This is the third article in a 63-part series. Read all parts. If you have stuck with me for the past two months, you'll know that most natural sounds have complex harmonic structures, and that these derive from the nature of the object making the sound. You'll also appreciate that, no matter how you play them or what you do when you record them, percussion instruments will have significantly different tones from strings, pipes, and other 'conventional' instruments. But this knowledge is far from sufficient to allow you to understand and create the sounds you want artificially, with a synthesizer; you also need to know about the controllers and modifiers that shape the sounds you hear. Modifying A Sound There are no sounds that you can define purely in terms of their harmonic spectra.

Envelopes n Figure 3. Synth Secrets, Part 2: The Physics Of Percussion. The first part of this series explained how the tones of most real instruments can be reduced to patterns of harmonics, which can be generated using sine, saw, square or pulse waveforms. 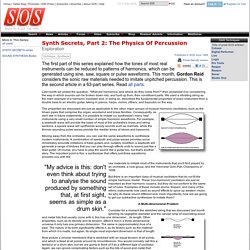 This month, Gordon Reid considers the sonic raw materials needed to imitate unpitched percussion. This is the second article in a 63-part series. Read all parts. Last month we posed the question, "What are harmonics, and where do they come from? " then answered it by considering the way in which sounds can be broken down into, and built up from, their constituent parts. Synth Secrets, Part 1: What's In A Sound? In the first part of this new series exploring the world of subtractive synthesis, Gordon Reid goes right back to basics. 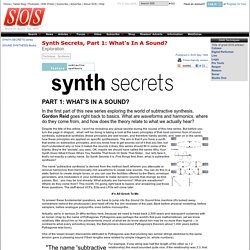 What are waveforms and harmonics, where do they come from, and how does the theory relate to what we actually hear? Synth Secrets, Part 4: Of Filters & Phase Relationships. Having dealt last month with the concepts of envelopes, oscillators and LFOs, Gordon Reid moves on to the subject of filters, and the havoc they wreak on the signals that pass through them. 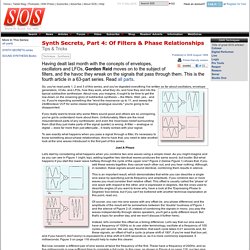 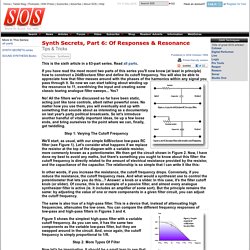 Read all parts. If you have read the most recent two parts of this series you'll now know (at least in principle) how to construct a 24dB/octave filter and define its cutoff frequency. You will also be able to appreciate how that filter messes around with the phases of the harmonics within any signal you pass through it. So now we can start talking about winding up the resonance to 11, overdriving the input and creating some classic tearing analogue filter sweeps... No! Step 1: Varying The Cutoff Frequency We'll start, as usual, with our simple 6dB/octave low-pass RC filter (see Figure 1).

Synth Secrets, Part 7: Envelopes, Gates & Triggers. You press a key on your synth. 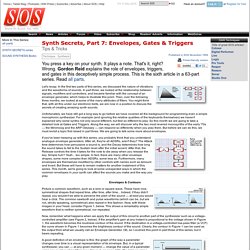 It plays a note. That's it, right? Wrong. Gordon Reid explains the role of envelopes, triggers, and gates in this deceptively simple process. This is the sixth article in a 63-part series. Let's recap. Unfortunately, we have still got a long way to go before we have covered all the background for programming even a simple monophonic synthesizer. If you've been keeping up with this series, you probably think that you understand analogue envelope generators. Envelopes & Contours Picture a common waveform, such as a sine or square wave. Synth Secrets, Part 9: An Introduction To VCAs. Having laid bare the inner workings of oscillators, contour generators and filters, Gordon Reid turns his attention to something which at first sight seems entirely self-evident. 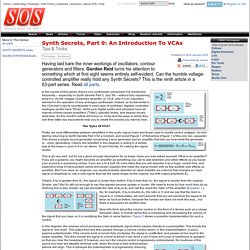 Can the humble voltage-controlled amplifier really hold any Synth Secrets? This is the ninth article in a 63-part series. Read all parts. In the course of this series, there's one synthesizer component I've mentioned frequently -- especially in Synth Secrets Part 3, July '99 -- without fully explaining what it is. It's the Voltage Controlled Amplifier, or 'VCA', and it is an important element in the operation of any analogue synthesizer. Two Types Of VCA?

Firstly, we must differentiate between amplifiers in the audio signal chain and those used to modify control voltages. Acting in a similar way to the amps in your hi-fi or car stereo. This is all very well, but it's not a good enough description for us today. Synth Secrets, Part 12: An Introduction To Frequency Modulation. As Gordon Reid explained last month, audio-frequency modulation of the amplitude of a signal can be a powerful synthesis tool. 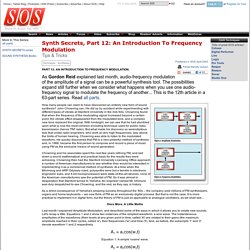 The possibilities expand still further when we consider what happens when you use one audio-frequency signal to modulate the frequency of another... This is the 12th article in a 63-part series. Read all parts. How many people can claim to have discovered an entirely new form of sound synthesis? John Chowning can. Chowning and his associates spent the next few years refining FM, and laid down a sound mathematical and practical basis for the results they were achieving. As a direct consequence of Yamaha's amazing success throughout the '80s -- the company sold millions of FM synthesizers, organs and home keyboards -- we now think of FM as an exclusively digital process.

Synth Secrets, Part 14: An Introduction To Additive Synthesis. Every pitched sound can be thought of as a collection of individual sine waves at frequencies related to the fundamental. Gordon Reid introduces a powerful method of synthesis that works by manipulating these individual harmonics. This is the 14th article in a 63-part series. Read all parts. For the past two months Synth Secrets has concentrated on frequency modulation, showing (I hope) that FM synthesis (or 'Cross Modulation' as it often used to be called) is as relevant to analogue synthesizers as it is to the digital synths that made it a household name.

So now it's time to move on -- to another realm of sound creation that is normally associated only with digital synths. Synth Secrets, Part 23: Formant Synthesis. Last month, we discussed a way of emulating acoustic musical instruments using short delay lines such as spring reverbs and analogue reverb/echo units. Sound Design For Visual Media & Radio. The sound designer may use many of the same basic skills and tools as the recording musician, but the role requires you to think rather differently... Nick Metcalfe Sound design — the craft of creating sound effects, editing music and finessing dialogue for film, TV and radio, computer games and even theatre — has been my main profession for over 11 years now, but I also lecture in the subject, and it is my work with students that inspired me to put pen to paper and write a practical workshop on this subject.

These workshops will focus largely on the essential tools and techniques that novice sound designers need to learn, but there should also be plenty in here that more experienced 'soundies' can brush up on too. Before we get into any nuts-and-bolts examples, though, let's take a moment to think about what sound design sets out to achieve.