Why do they use boom mics, when the actors are already hooked up to Lavs? [quick sound question from a newb!] : Filmmakers. Foley: The Art of Making Sound Effects. Top image via SoundWorks Collection Image: Jack Foley via The Art of Foley Jack Foley started working for Universal Studios in 1914. 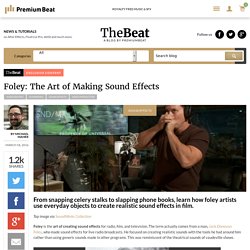 By the time “talkies” came around in the 1920s, studios wanted to create authentic sound effects for their films. On set, microphones were only used to record dialogue. Therefore sound effects would have to be recorded after the film was shot. Foley assembled a team that would project the film onto a screen while recording an audio track of sound effects — mostly footsteps. Foley became the expert in sound effects audio recording. Three Types of Foley Foley artists do not create every sound in a film. Image: Universal Studios Foley Pit via The Studio Tour 1. This category is self-explanatory. These surfaces are called foley pits, which offer all sorts of different flooring types. 2. Movement focuses on the sounds of clothing a character is wearing. Image via Shutterstock 3. Creating the sounds made by props can fall under the foley artist or sound editor.

Audio for Wedding Filmmakers. Don't Fix It in Post: These Techniques Will Help You Record Better Location Sound. Though ADR is unavoidable sometimes, it can be time consuming, expensive, and frustrating as hell. 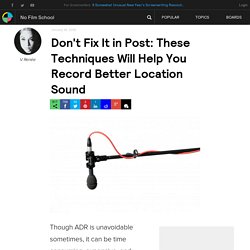 That's why it's imperative to know how to record good location audio so you get it right the first time. If you need a few tips on how to do this, Sound Designer/Sound Mixer Jonah Guelzo and Boom Operator Tyler Lyons walk you through their own recording process for their feature film Where are you Bobby Browning?. This video is great, because you'll learn a wide range of basic and advanced techniques, like how to attach a lav mic to someone's chest, how to hide mics inside a car, and what kind of professional gear to use if you want to do dual system. Check it out below: Probably the most important lesson to learn from this video is this: don't have a "fix it in post" mentality. How To Record Sound For Your Film - Indie Filmmaking Sound Tutorial.

Recording The Grand Piano: The Dave Brubeck Sessions. Making The Most Of A Boom Mic. SMAPP Series (2013) This Video Breaks Down the Basics of Sound Recording, from Sample Rates to Mic Placement. Sound Design Space: 10 of the Best Sound Design Resources on the Net Today - EDMProd. The Black Friday and Cyber Monday sales have come to an end, you’re stuck in the studio with 5 new synths, completely overwhelmed and not sure what to do. 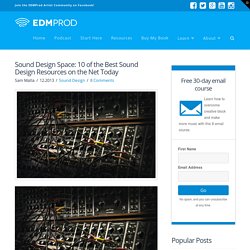 Maybe you’re completely new to sound design, or maybe you know a fair bit but are looking to extend your knowledge. Whatever the case, there’s something here for you. I took the time to compile a list of ten comprehensive and educational sound design resources. I’ve included in brackets the level of skill I recommend each one for (Beginner, Intermediate, Advanced, or Everyone). Enjoy! 1. Syntorial is the coolest thing since sliced bre… waveforms! What is it? A fully functional and interactive learning experience. Pretty cool, right? Syntorial can be tried out for free with no time limit. 2. How to Make a Noise: a Comprehensive Guide to Synthesizer Programming is a book I read when I started off producing which helped immensely. It’s widely popular, and also free! Read more and grab a free download of the book here. 3. 4. 5. 6. Demystifying Sound Design: 15 Online Learning Resources for Film, Games, and More. 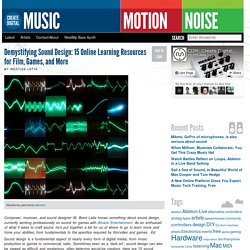 Brent Latta knows something about sound design, currently working professionally on sound for games with Amaze Entertainment. As an enthusiast of what it takes to craft sound, he’s put together a list for us of where to go to learn more and hone your abilities, from fundamentals to the specifics required by film/video and games. -Ed. Hey Audio Noobs! This Video Will Have You Editing Sound like a Pro in No Time. We've talked about the history as well as the fundamentals of the science and engineering of sound, and now it's time to get into the common tools utilized when creating and editing it. 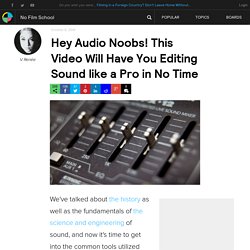 You might be a rockstar at editing video footage in your NLE of choice, but if you're like me and you get a little anxious every time you look at all of the options in audio, then this video is definitely for you. This is the third installment of Filmmaker IQ's incredibly informational and accessible series, and host John P. Hess walks you through several basic effects, like equalizers, compressors, and noise reduction to give you a better understanding of how to work with audio in post-production.

Probably one of the first audio effects I ever tried to create was one that mimicked what a voice sounds like on the other end of a phone, which, thanks to my purile, teenage brain, was a complicated, and ultimately unfruitful endeavor.