Aaron Marks Special: Creating Sound Effects for Games. This article is an excerpt of the The Complete Guide to Game Audio. 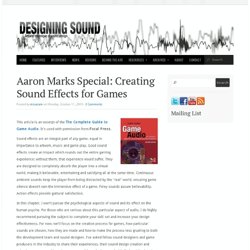 It’s used with permission from Focal Press. Sound effects are an integral part of any game, equal in importance to artwork, music and game play. Good sound effects create an impact which rounds out the entire gaming experience; without them, that experience would suffer. They are designed to completely absorb the player into a virtual world, making it believable, entertaining and satisfying all at the same time. Continuous ambient sounds keep the player from being distracted by the “real” world, ensuring game silence doesn’t ruin the immersive effect of a game. In this chapter, I won’t pursue the psychological aspects of sound and its effect on the human psyche. 9.4 Sound Design in the Production Cycle Sound design creation can begin at any point in the development.

This is an easy lesson for all of us. If money isn’t a terrible concern, the developer can choose to add rough sound effects to help inspire the team. Audio Tips For Game Sound-Mix magazine offers Ideas for Audio for Video games. So you're a pro at post or an expert at mixing music CDs. 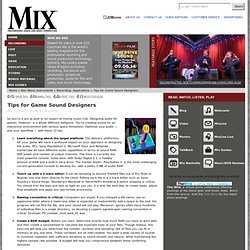 Designing audio for games, however, is a whole different ballgame. You're creating sound for an interactive environment with serious space limitations. Optimize your audio — and your workflow — with these 10 tips. Learn everything about the target platform: The delivery platform(s) for your game will have a profound impact on your approach to designing the audio. PCs, Sony PlayStation 2, Microsoft Xbox and Nintendo GameCube all have different audio capabilities in terms of sound RAM, DSP power and number of output channels.

Why ambient sound matters to your game. In this reprint from the April 2007 issue of Game Developer magazine, guest contributor Rob Bridgett invites sound designers to think about how they can enrich the ambient sound of their games. 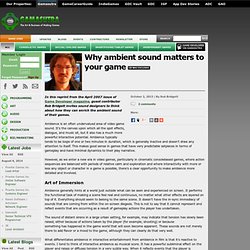 Ambience is an often undervalued area of video game sound. It's the canvas upon which all the spot effects, dialogue, and music sit, but it also has a much more powerful interactive potential. Ambience typically tends to be loops of one or two minutes in duration, which is generally inactive and doesn't draw any attention to itself. This makes good sense in games that have very predictable setpieces in terms of gameplay and have minimal dynamics to their play narrative. Ambience generally hints at a world just outside what can be seen and experienced on screen.

Mark Kilborn's Blog - Some Advice for the Aspiring Sound Designer. The following blog post, unless otherwise noted, was written by a member of Gamasutra’s community. 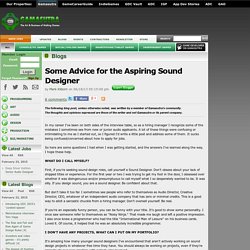 The thoughts and opinions expressed are those of the writer and not Gamasutra or its parent company. In my career I've been on both sides of the interview table, so as a hiring manager I recognize some of the mistakes I sometimes see from new or junior audio applicants. A lot of these things were confusing or intimidating to me as I started out, so I figured I'd write a little post and address some of them. It sucks being confused/concerned about how to apply for jobs. So here are some questions I had when I was getting started, and the answers I've learned along the way. First, if you're seeking sound design roles, call yourself a Sound Designer. But don't take it too far.

If you're an especially funny person, you can be funny with your title. Always be making noise. Feature: 'The Future Of Game Audio - Is Interactive Mixing The Key?' Game audio has reached a level of incredible complexity and sophistication, thanks to in part to increasingly advanced tools. 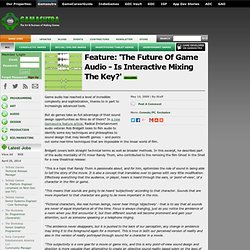 But do games take as full advantage of their sound design opportunities as films do of theirs? In a new Gamasutra feature article, Radical Entertainment audio veteran Rob Bridgett looks to film audio to identify some key techniques and philosophies to sound design that may benefit games -- and points out some real-time techniques that are impossible in the linear world of film. Bridgett covers both straight technical terms as well as broader methods. In this excerpt, he describes part of the audio mentality of FX mixer Randy Thom, who contributed to the remixing the film Ghost in the Shell for a new theatrical release: "This is a topic that Randy Thom is passionate about, and for him, epitomizes the role of sound in being able to tell the story of the movie. 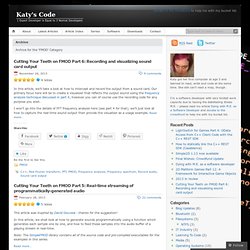 Our primary focus here will be to create a visualizer that reflects the output sound using the frequency analysis technique discussed in part 4, however you can of course use the recording code for any purpose you wish. I won’t go into the details of FFT frequency analysis here (see part 4 for that); we’ll just look at how to capture the real-time sound output then provide the visualizer as a usage example. Read more… Martdon.weebly.com/uploads/1/7/7/4/17748429/d_martin_project_cmt305.pdf. Mark Kilborn's Blog - Some Advice for the Aspiring Sound Designer. Harry Mack - Game Audio Designer.