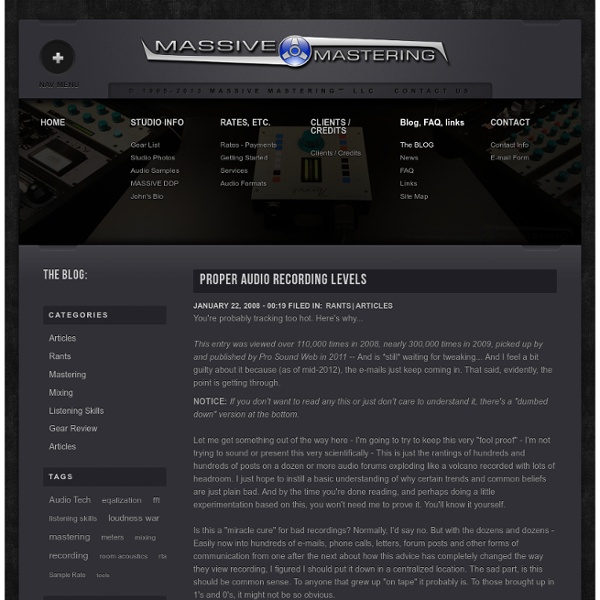 NOTICE: If you don't want to read any this or just don't care to understand it, there's a "dumbed down" version at the bottom. Let me get something out of the way here - I'm going to try to keep this very "fool proof" - I'm not trying to sound or present this very scientifically - This is just the rantings of hundreds and hundreds of posts on a dozen or more audio forums exploding like a volcano recorded with lots of headroom. I just hope to instill a basic understanding of why certain trends and common beliefs are just plain bad. And by the time you're done reading, and perhaps doing a little experimentation based on this, you won't need me to prove it. You'll know it yourself. Is this a "miracle cure" for bad recordings? So, if you've been struggling with recordings that sound "weak" or "small" or too dense or "just not 'pro' enough" then please, read on. As a mastering engineer, I work on recordings from pretty much every level of experience. You're probably recording too hot.

Glossary of Technical Terms for Sound and PA Engineers Making a Cello As I showed in the previous posting, the top and back have different archings – the top has a pronounced saddle, or flattening, in the middle. To understand why we have to take a brief detour into the land of acoustics. But one as seen through the eyes of a violinmaker – which is the difference between an engineer explaining the airplane you’re sitting in, cruising over the Atlantic four miles up, versus the guy with the tuna sandwich who was sitting out on the wing with a screwdriver an hour before you took off. Acoustics, like the instrument itself, is as much art as it is science; which means that when you get down to it, there’s as much theory as there is settled fact. Let's begin with the basics: sound is the displacement of air. The cello string looks like this when you pluck or bow it: A pretty simple oval, right? A simple oval produces simple harmonic motion: a fundamental note (an A440, for example) with no overtones. First, through acoustical resonance.

DIY Recording Studio Acoustic Panels Acoustic treatments are often used to help improve the acoustics of a room by taming "flutter echoes," "room modes," and other problems which arise from a room's dimensions and construction. Although a variety of treatments are available for commercial use, they tend to be quite expensive. After some research both online and in print, we came across several sources for DIY acoustic treatments using rigid fiberglass panels and simple frames. These are often referred to as "bass traps," although the ones that we're focusing on have a fairly wide rage of absorption. While commercial versions are available for almost $100, we were able to make these panels for about $24 each. We can not take credit for this design, but have combined several people's ideas into a step-by-step guide. For more information, check out the good folks in the acoustics forum at recording.org

Stereomood (Playlist by Emotion) - Tracking : Resource Library and More Information Look here for articles on applied recording techniques and mic placement. It all starts here! Acoustic Guitar Tracking the acoustic guitar is a huge subject, because so much contributes to the final sound—player, instrument, room acoustics, mic choice and placement, effects, and more. Electric Guitar The electric guitar is the central sound of rock music, and has influenced everything from blues and country to electronica. Bass Recording the bass can be as straightforward as a simple DI to the console or as complex as multiple mics on an acoustic bass fiddle or giant amp stack. Other Guitars The archtop, the dobro, the parlor guitar, the pedal steel—scary to the newcomer, each with its own challenges. Drums & Percussion Miking drums is an art form. Vocals The human voice is the most recognizable sound to the human brain. Horns & Woodwinds Whether you're recording jazz, jump blues, R&B, or whatever, a clear and present woodwind track or a slamming horn section can make your arrangement fly.

How Can I Set Up a Home Recording Studio on the Cheap? also, keep in mind that not everyone needs an audio interface. if you are only recording one track at a time or are recording more than one track but are fine with mixing it as you record you can use a much cheaper and oodles simpler analog mixing board/mixer. i struggled for over a year with a USB audio interface box i bought for home recording and it was ALWAYS a hassle - either really high latency, dropped sections, or it would take 15-20 minutes of fiddling with system prefs and settings in software to get it to work right. i finally went to my local music store and picked up a behringer analog mixer for $49 which has 8-Inputs (2 mic, 2 stereo, 1 stereo tape/CD), builtin EQ, effects send/receive, and the mic jacks have phantom power and the line inputs work great for electric instruments, a headphone out and I use an RCA-to-mini-1/8th-stereo plug to connect directly into the mic jack on my mac mini. It's simple, always works, and has real knobs and buttons.

How to Use a Noise Gate to Get Rid of Unwanted Noise in Your Audio Recordings Unfortunately, for musical composition you are going to have to pay for things if you want real quality. I'm not exactly sure what you want though; For notation you really need Finale or Sibelius, other free or shareware programs might be workable, but for full control over anything you are going to have to pay for the program. For real sounding instrument samples, I suggest either Reason or Logic. Both are going to cost a pretty penny, but the sheer amount of samples that comes with something like logic is astounding (Over 50 Gb of real instrumental samples and things) I would also suggest looking into an M-Audio box, for microphone capture, and a Midi controller for direct inputs from an electric piano. You can find basically all of that at M-Audio's website: [www.m-audio.com] Hope it helps! Are you looking for shareware/freeware or are you willing to pay? Try REAPER. I'm willing to pay something reasonable.