Is noise of modern life making you ill? It can trigger heart disease and weight gain. By Jerome Burne for MailOnline Published: 23:02 GMT, 9 June 2014 | Updated: 09:07 GMT, 16 June 2014 We are surrounded by the sounds of the machinery that make our lives comfortable and convenient. 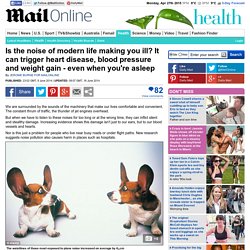 The constant thrum of traffic, the thunder of jet engines overhead. But when we have to listen to these noises for too long or at the wrong time, they can inflict silent and stealthy damage. Increasing evidence shows this damage isn't just to our ears, but to our blood vessels and hearts. Nor is this just a problem for people who live near busy roads or under flight paths. The waistlines of those most exposed to plane noise increased on average by 6¿cm Last week the world's experts gathered in Japan to discuss the latest findings about noise and health. Last month, scientists from Karolinska University found an even more dramatic effect from plane noise. The Secret Power of Music: The Transformation of Self and Society through Musical Energy. Welcome to the Center for Neuroacoustic Research! Dr. 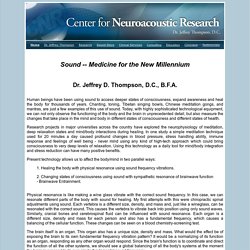 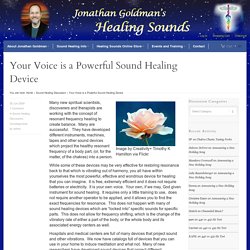 Many are successful. They have developed different instruments, machines, tapes and other sound devices which project the healthy resonant frequency of a body part, (or, for the matter, of the chakras) into a person. While some of these devices may be very effective for restoring resonance back to that which is vibrating out of harmony, you all have within yourselves the most powerful, effective and wondrous device for healing that you can imagine. It is free, extremely efficient and it does not require batteries or electricity.

It is your own voice. Hospitals and medical centers are full of many devices that project sound and other vibrations. To illustrate this, let us discuss your chakras for the moment. The variety of different notes that was used was quite extraordinary. The formula is this: FREQUENCY + INTENT = HEALING. Welcome to the Center for Neuroacoustic Research! The Mozart Effect and epilepsy. There is a theory that listening to a particular piece of music, written by Mozart, may improve how well the brain works This may be a helpful treatment for some people with a neurological condition, including epilepsy. 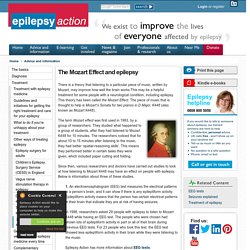 This theory has been called the Mozart Effect. The piece of music that is thought to help is Mozart’s Sonata for two pianos in D Major, K448 (also known as Mozart K448). The term Mozart effect was first used in 1993, by a group of researchers. They studied what happened to a group of students, after they had listened to Mozart K448 for 10 minutes. The researchers noticed that for about 10 to 15 minutes after listening to the music, they had better ‘spatial-reasoning skills’.

Since then, various researchers and doctors have carried out studies to look at how listening to Mozart K448 may have an effect on people with epilepsy. 1. In 1998, researchers asked 29 people with epilepsy to listen to Mozart K448 while having an EEG test. 2. 3. Un-Hun System of Nikolay Oorzhak and Vladislav Matrenitsky. Un-Hun - the Sound of Sun Destination of system: Using a Khoomei sound, learn how to use the internal energy to open the heart, develop a spirituality, improve the health and reach a longevity. 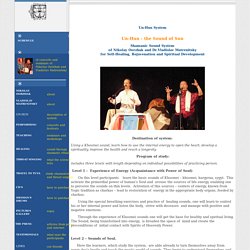 Program of study: includes three levels with length depending on individual possibilities of practicing person. Level 1 - Experience of Energy (Acquaintance with Power of Soul) Speakers at the International Sound Healing Conference. Keynote Speakers Don Campbell - Full Bio composer, author, The Mozart Effect, Introduction to the Musical Brain, The Mozart Effect for Children and many others, is a recognized authority on the transformative power of music, listening and “The Mozart Effect” Keynote: From the Big Bang to Harmonic Healing: Awakening the Spirit of Sound Workshop: Advanced Healing Techniques for the Voice David Hykes David Hykes - Full Bio. 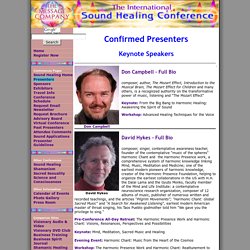 BioWaves Sound Therapy. Chapter II: What are Harmonics and Overtones? Harmonics, also called Overtones, are a physical phenomenon that applies to every kind of sound. 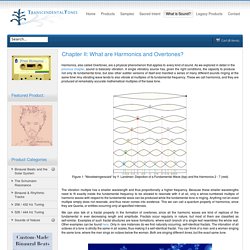 As we explored in detail in the previous chapter, sound is basically vibration. A single vibratory source has, given the right conditions, the capacity to produce not only its fundamental tone, but also other subtler versions of itself and manifest a series of many different sounds ringing at the same time!

Any vibrating wave tends to also vibrate at multiples of its fundamental frequency. These we call harmonics, and they are produced at remarkably accurate mathematical multiples of the base tone. Figure 1: "Moodswingerscale" by Y. The vibration multiple has a smaller wavelength and thus proportionally a higher frequency. Harmonic Frequency - Fractal Forest. WHAT IS THE LIQUID SOUND TABLE? — Dr. Sarah Lane, ND. Aldiko™ - eBook Reader Application for Android.