Drum Head Vibrations - snarescience.com. Submitted by Derrick Knight (knight427) Every drummer knows that hitting a drum directly in the center gives a much different sound than hitting a drum off-center. 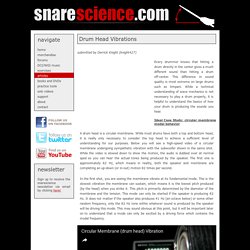 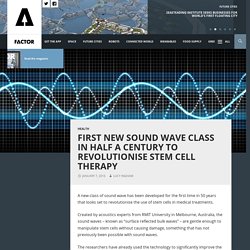 Created by acoustics experts from RMIT University in Melbourne, Australia, the sound waves – known as “surface reflected bulk waves” – are gentle enough to manipulate stem cells without causing damage, something that has not previously been possible with sound waves. The researchers have already used the technology to significantly improve the efficiency of an advanced nebuliser device developed at RMIT, which delivers medicine directly to the lungs. “We have used the new sound waves to slash the time required for inhaling vaccines through the nebuliser device, from 30 minutes to as little as 30 seconds,” said study co-author Dr Amgad Rezk, from the Micro/Nano Research Laboratory at RMIT. Dr Amgad Rezk, who co-authored the study with PhD researcher James Tan.

Crossover sound: Unambiguous evidence for coherent phonons in superlattices. We all learn in high school science about the dual nature of light - that it exists as both waves and quantum particles called photons. 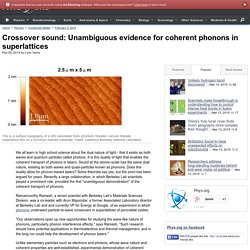 It is this duality of light that enables the coherent transport of photons in lasers. Sound at the atomic-scale has the same dual nature, existing as both waves and quasi-particles known as phonons. Does this duality allow for phonon-based lasers? Some theorists say yes, but the point has been argued for years. Sounds of 'Alien Birds' in Space Recorded by NASA Spacecraft. A NASA spacecraft has made the clearest record yet of choruses of noise in the Earth's magnetosphere. 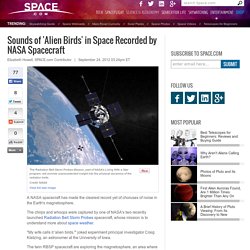 The chirps and whoops were captured by one of NASA's two recently launched Radiation Belt Storm Probes spacecraft, whose mission is to understand more about space weather. "My wife calls it 'alien birds,'" joked experiment principal investigator Craig Kletzing, an astronomer at the University of Iowa. The twin RBSP spacecraft are exploring the magnetosphere, an area where solar particles add energy to the Earth's magnetic environment, leading to a release of energy in the Van Allen radiation belt. [Weird 'Sounds' Picked Up By Space Probes Orbiting Earth(Video)] Energy transfer. What Music Really İs. The “What Music Really İs” Manual:What Is It, and What It Is Not The “Research” section on this website represents the in-the-making process of the What Music Really İs manual as an interactive presentation, book, and featured documentary. It wishes to be *the* scientific & mystical knowledge base on the science of music: sound, acoustics, tuning and all else related. “What Music Really İs” is a statement. It is not a question, and not a theory. It is a fact. All the concepts presented here are not the result of historical practice, do not adhere to any philosophy, are not linked to any school of taught and do not specifically endorse any form of institutionalized, academic- or esoteric-type of content. Music, Sound and other Acoustic Phenomena are discussed and analyzed in their NUMERICAL FORM only, and visualized exactly as they are perceived through the sense of hearing. “What Music Really İs” wishes to be: The idiot's guide to what is music. Acoustic meridian Therapy, Bioresonance therapy ; Articles & Patents. Microscale Assembly Directed by Liquid-Based Template - Chen - 2014 - Advanced Materials.

Normal mode. Vibration of a single normal mode of a circular disc with a pinned boundary condition along the entire outer edge. 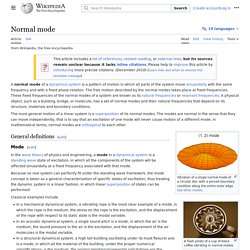 That music alone can be called real which comes from the harmony of the soul, its true source, and when it comes from there it must appeal to all souls. Every soul differs in its choice in life, in its choice of the path it should follow. Science Experiment : Sound Traveling. Since this week's video explores sound traveling through solids and gases, I thought that this would be a good time to compare that with the way sound travels through liquids. 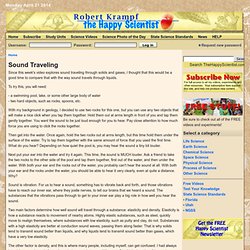 To try this, you will need: - a swimming pool, lake, or some other large body of water - two hard objects, such as rocks, spoons, etc. With my background in geology, I decided to use two rocks for this one, but you can use any two objects that will make a nice click when you tap them together. Hold them out at arms length in front of you and tap them gently together. You want the sound to be just loud enough for you to hear. Then get into the water. Next put your ear into the water and try it again. Sound is vibration. Two main factors determine how well sound will travel through a substance: elasticity and density.

The other factor is density, and this is where many people, including myself, can get confused. Actually, the opposite is true. For that, we have to think about inertia. Have a wonder-filled week.