Sound - The science of waves, how they travel, how we use them. Advertisement by Chris Woodford. 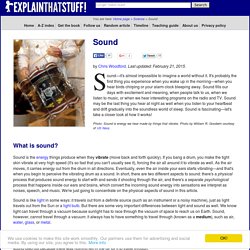 Last updated: February 21, 2015. Sound—it's almost impossible to imagine a world without it. It's probably the first thing you experience when you wake up in the morning—when you hear birds chirping or your alarm clock bleeping away. Sound fills our days with excitement and meaning, when people talk to us, when we listen to music, or when we hear interesting programs on the radio and TV. Photo: Sound is energy we hear made by things that vibrate.

How does ultrasound work? By Chris Woodford. 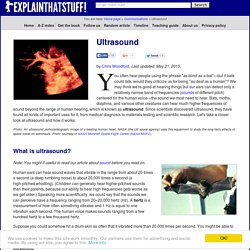 Last updated: May 21, 2015. You often hear people using the phrase "as blind as a bat"—but if bats could talk, would they criticize us for being "as deaf as a human"? We may think we're good at hearing things but our ears can detect only a relatively narrow band of frequencies (sounds of different pitch) centered on the human voice—the sound we most need to hear. Bats, moths, dolphins, and various other creatures can hear much higher frequencies of sound beyond the range of human hearing, which is known as ultrasound. Since scientists discovered ultrasound, they have found all kinds of important uses for it, from medical diagnosis to materials testing and scientific research. Photo: An ultrasound (echocardiograph) image of a beating human heart.

What is ultrasound? Note: You might it useful to read our article about sound before you read on. Suppose you could somehow hit a drum-skin so often that it vibrated more than 20,000 times per second. Physics for Kids: Basics of Sound. Science >> Physics for Kids Sound is a vibration, or wave, that travels through matter (solid, liquid, or gas) and can be heard. 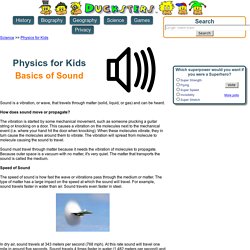 How does sound move or propagate? The vibration is started by some mechanical movement, such as someone plucking a guitar string or knocking on a door. This causes a vibration on the molecules next to the mechanical event (i.e. where your hand hit the door when knocking). When these molecules vibrate, they in turn cause the molecules around them to vibrate. The vibration will spread from molecule to molecule causing the sound to travel. Sound must travel through matter because it needs the vibration of molecules to propagate. Bats and Echolocation. In the last section, we saw that the unique wing structure of bats gives them a great deal of flight maneuverability. 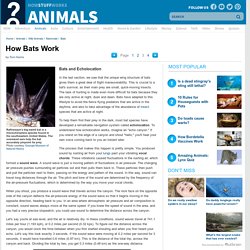 This is crucial to a bat's survival, as their main prey are small, quick-moving insects. The task of hunting is made even more difficult for bats because they are only active at night, dusk and dawn. Bats have adapted to this lifestyle to avoid the fierce flying predators that are active in the daytime, and also to take advantage of the abundance of insect species that are active at night. To help them find their prey in the dark, most bat species have developed a remarkable navigation system called echolocation. To understand how echolocation works, imagine an "echo canyon. " The process that makes this happen is pretty simple.

When you shout, you produce a sound wave that travels across the canyon. Let's say you're at sea level, and the air is relatively dry. Dangerous Decibels Virtual Exhibit CD. Sound and Noise. How Do We Hear, How Does The Ear Work, About Your Ear. Why do we hear? 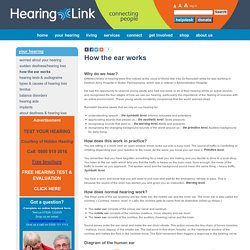 Different levels of hearing were first noticed at the close of World War II by Dr Ramsdell while he was working in Deshon Army Hospital in Butler, Pennsylvania, which was a veteran’s Administration Hospital. He had the opportunity to observe young adults who had lost some or all of their hearing whilst on active service, and recognised the four stages of how we use our hearing, particularly the importance of the ‘feeling of oneness with an active environment’. These young adults constantly complained that the world seemed dead.

Ramsdell became aware that we rely on our hearing for: understanding speech – the symbolic level. How does this work in practice? You are sitting in a room near an open window which looks out onto a busy road. You remember that you have forgotten something for a meal you are making and you decide to drive to a local shop. You hear a siren and know that you will need to pull over and wait for the emergency vehicle to pass. How does normal hearing work? Sound is a Pressure Wave. Sound is a mechanical wave that results from the back and forth vibration of the particles of the medium through which the sound wave is moving. 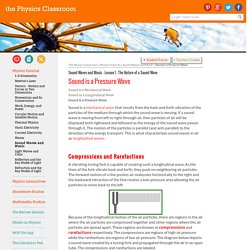 If a sound wave is moving from left to right through air, then particles of air will be displaced both rightward and leftward as the energy of the sound wave passes through it. The motion of the particles is parallel (and anti-parallel) to the direction of the energy transport. This is what characterizes sound waves in air as longitudinal waves. Compressions and Rarefactions A vibrating tuning fork is capable of creating such a longitudinal wave.