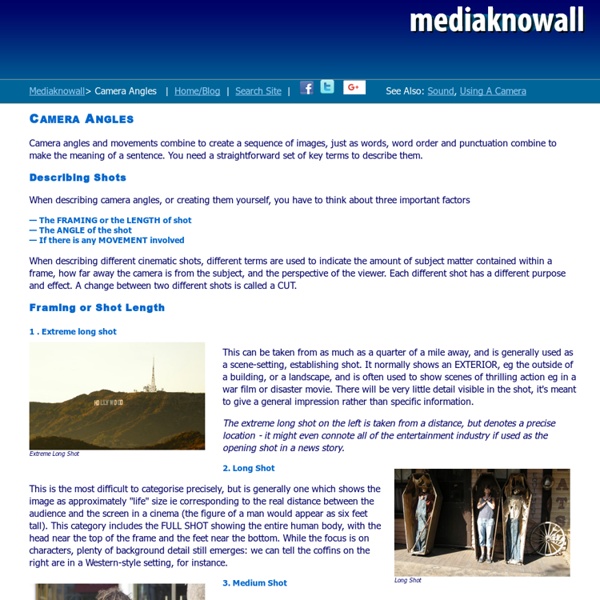 Camera angles and movements combine to create a sequence of images, just as words, word order and punctuation combine to make the meaning of a sentence. You need a straightforward set of key terms to describe them. Describing Shots When describing camera angles, or creating them yourself, you have to think about three important factors — The FRAMING or the LENGTH of shot — The ANGLE of the shot — If there is any MOVEMENT involved When describing different cinematic shots, different terms are used to indicate the amount of subject matter contained within a frame, how far away the camera is from the subject, and the perspective of the viewer. Framing or Shot Length 1 . Extreme Long Shot This can be taken from as much as a quarter of a mile away, and is generally used as a scene-setting, establishing shot. The extreme long shot on the left is taken from a distance, but denotes a precise location - it might even connote all of the entertainment industry if used as the opening shot in a news story.

Green Screen on the iPad Green screen is one of the best learning tools in our learning commons. Our students are really making their learning come alive by recording video using the green screen. DoInk has just released a new Green Screen App for the iPad. It is an easy to use App that allows you create green screen in one shot, rather than edit it using iMovie or another video editing application. For this particular group of stuents, they wanted to be newscasters. We tried covering a desk with green paper and to see if we could make it work. Film Speak “Know your Bolex from your Barney with our glossary of film industry terms.”A – B – C – D – E – F – G – H – I – J – L – M – N – O – P – R – S – U – W – ZA A and B ROLLS - The negative of an edited film, cut to picture, but built into 2 rolls, A and B, to allow for invisible splices, instant changes of the timing lights, fades and dissolves. A roll will have all the odd numbered shots, with black leader in place of any missing shots contained on the B roll. B roll has all the even numbered shots, with black leader in place of all the shots on the A roll.

Green Screen Tutorial After posting about how I make movies with my kindergarteners, I had some people ask about how I use the green screen. So, I thought I would write a tutorial for you. It is super easy to use. This is how I use my green screen. 180 degree rule This schematic shows the axis between two characters and the 180° arc on which cameras may be positioned (green). When cutting from the green arc to the red arc, the characters switch places on the screen. In film making, the 180-degree rule[1] is a basic guideline regarding the on-screen spatial relationship between a character and another character or object within a scene. An imaginary line called the axis connects the characters, and by keeping the camera on one side of this axis for every shot in the scene, the first character is always frame right of the second character, who is then always frame left of the first. The camera passing over the axis is called jumping the line or crossing the line; breaking the 180-degree rule by shooting on all sides is known as shooting in the round. The object that is being filmed must always remain in the center, while the camera must always face towards the object.

Create a Maker Club, Start a Movement - The Power of Starting Small Creating with Cardboard The maker movement has been a hot topic for the past year or so but a lot of times, the focus is how to create makerspaces or completely revamp your curriculum to integrate these new approaches. School change is often something that needs to move slowly and in incremental steps. If changing your entire school seems overwhelming, try starting a bit smaller and try starting with your youngest students. If we truly want to help students grow up with a maker mindset and sustain the innate curiosity and wonder that they have for discovery, learning, and creating, then I think we need to start supporting making in early childhood. In order to find out first-hand how students as young as kindergarten can engage with making and STEAM projects, I have been running a DIY Makers Club for a small group of K-2nd grade students after school each week.

mental_floss Blog » 15 Film Production Credits Explained Ever wonder what all those strange credits are when they roll by at the end of a film? I used to, until I moved to LA, where I started meeting Best Boys and Dolly Grips with their kids when I took my son to the playground—yes, Hollywood, where you meet Gaffers and Armourers at your average Saturday night house party. So I started asking questions, and here's what I've learned: 1. Optical Illusions - grade 5 I just adore doing optical illusions, and kids really seem to love them too. This is a great one that students can easily experience success with (especially if you use my template!) Let me start by talking about the template.

Exhibits Collection Imagine a young child, eye level with a floor full of miniature toys, concentrating intently on building a make-believe world. To the child, the toys are not miniature figures made of plastic or wood. They are real characters with real adventures. The child frames the action, crafting scenes that unfold in a world of imagination. *Excel Tutorials Walk through the analytical process one technique at a time. Newest Tutorials Import and Merge Datasets Film Directing and Film Making Tips for the Independent Filmmaker » Blog Archive » The 7-Step Film Directing Formula I’ve been working professionally in the film and TV business for 37 years. During that time, I’ve had the opportunity to work on industrial films, educational films, documentaries, commercials, music videos, episodic TV shows, TV movies, Indie films and Hollywood features. I’ve worked with dozens of good, mediocre and bad directors - as well as hundred’s of good, mediocre and bad actors.

Free Sankey Diagrams <svg id="sankey_svg" height="600" width="600" xmlns=" version="1.1"><title>Your Diagram Title</title><! Copy the code above to embed your diagram. Save it in a “.svg” file to edit it in another application. Every Flow will have a tooltip when hovering.