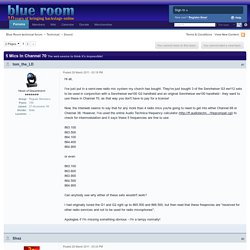 I'll go back in and have a play with some frequencies and see if I can get a solution. Other than that, they've said to put one of the G3's on the same frequency as the G1 handheld, as the two won't be used together - or not in a situation when a workaround isn't possible. For those that are just saying "return the sennheiser kit" what would be the good in that? The G3's are designed to work in either Channel 38, Channel 70 and I think Channel 69 too. 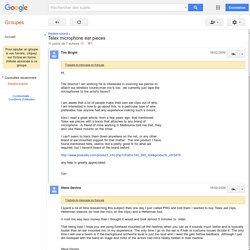 @gmail.com> wrote: > Hi, > > The director I am working for is interested in sourcing ear pieces to > attach our wireless countryman mic's too. we currently just tape the > microphones to the actor's faces!! > > I am aware that a lot of people make their own ear clips out of wire, > I am interested in how to go about this, is a particular type of wire > preferable, has anyone had any experience making such a mount. > > Also I read a great article, from a few years ago, that mentioned > Telex ear pieces with a boom that attaches to any brand of > microphone.

Tricks of the Trade: USING LAVALIER MICROPHONES. B3 Omnidirectional Lavalier. Our B3 is essential to any well-stocked pro audio toolkit: it captures the highest-quality audio available in a lavalier mic, with field-selectable high-frequency response caps and extremely low handling noise. 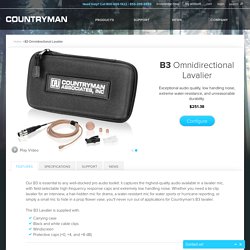 Whether you need a tie-clip lavalier for an interview, a hair-hidden mic for drama, a water-resistant mic for water sports or hurricane reporting, or simply a small mic to hide in a prop flower vase, you'll never run out of applications for Countryman's B3 lavalier. The B3 Lavalier is supplied with: Carrying caseBlack and white cable clipsWindscreenProtective caps (+0, +4, and +8 dB) High overload. Untitled. Chapter 4 of the Care and Feeding of Wireless Mics... Sweat Protection - TheatreFace. No matter how much time you've invested in setting up your wireless mic systems - planning layout, tuning frequencies, tweaking gain structure, EQing actors, never mind making your system sound good - it's all for not if you loose a mic mid performance due to a sweat out. 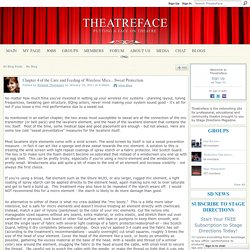 As mentioned in an earlier chapter, the two areas most susceptible to sweat are at the connection of the mic transmitter (or belt pack) and the lavaliere element, and the head of the lavaliere element that contains the mic itself. Most of the time, some medical tape and good placement are enough - but not always. Here are some low cost "sweat preventative" measures for the lavaliere itself. Most lavaliere style elements come with a wind screen. Us pro al1532 theater guide ea. Shure Wireless Frequencies Guide. 10th Feb 2014 - Shure UK Launches 'Losing Your Voice' Wireless Initiative Losing Your Voice is a Shure UK led initiative to develop a greater understanding of wireless technology and the ongoing changes. 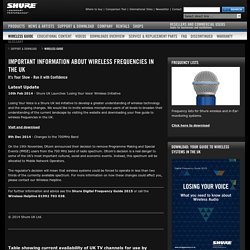 We would like to invite wireless microphone users of all levels to broaden their understanding of the current landscape by visiting the website and downloading your free guide to wireless frequencies in the UK. Visit and download. 5 Series - XTA. It’s a long list to cover, but for those who have never used a 4 Series unit, there is a formidable array of tools available to cater for your creative as well as your control/corrective needs. 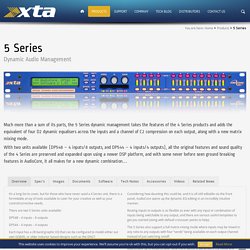 There are two 5 Series units available: DP548 – 4 inputs – 8 outputs DP544 – 4 inputs – 4 outputs Each input has a 28 band graphic EQ that can be configured to model either our own GQ600, or older inductor based designs such as the DN27. There are an additional 8 bands of “traditional” parametric EQ on each input. Sennheiser - Headphones & Headsets - Microphones - Integrated Systems. New Version 4.2 Sennheiser's Wireless Systems Manager is a professional software solution for remotely monitoring and controlling wireless systems. 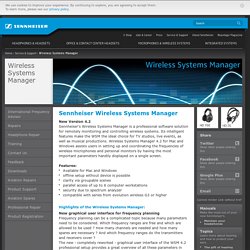 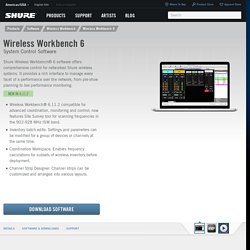 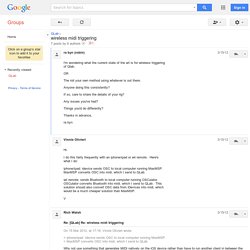 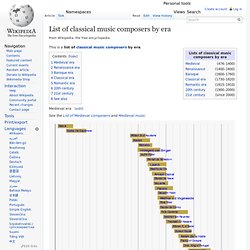 He is interested in developing new ways to create music through interactive technology. In particular, he wants to make electronic music performative and engaging to watch on stage, working with artists and musicians to integrate interactive technologies into their shows and installations. He has been interested in music since childhood, growing up playing in bands in and around London. In 2002 he chose to study Computer Science at Royal Holloway, University of London, spending those years equally divided between learning how to develop technology and writing & performing music with other students.

He later went on to study for a MSc in Digital Music Processing at Queen Mary University of London, specialising on audio effects that can automatically detect the tempo of performing musicians. String orchestra: sound reinforcement. Hi there, A few days ago I had the chance to listen to a string orchestra playing outdoors in a sort of small square. I have done a few gigs before like this and in this case not doing the gig learnt quite a bit about the problems that I have had before when being the person in charge of doing the job. The point is that the same problems occurred in this occasion and that the PA technician who did the job (a better professional than myself, presumably) didn't sort out these problems or didn't even hear them.

Maybe there is someone here who can give me some tips about how to solve these problems. So that you have an idea, going to try to describe the setup. Being outdoors and being quite a noisy place with people just walking by not paying attention to the concert, I think it was a good idea to spot mike and locate the mikes quite close to the instruments so to avoid all the noise around.

The problems that I heard where the following: - Then, the dynamics were also problematic. Best,

Gareth Fry Sound Design for Theatre. Gareth Fry Sound Design for Theatre News Biog About Me Portfolio Resources Workshops Specifications Used kit Interview in The Stage newspaper Let The Right One In - Apollo Theatre, London. Director: John Tiffany. Theatre's revolution in sound design. It's becoming par for the course these days - at least in some venues - to arrive at a theatre and pop a set of headphones over your ears, or watch actors wearing headphones, speaking words fed to them down a wire. Andrew Haydon believes "lip-synching and the use of the recorded voice has become the new kitchen sink".

I agree, sort of. Like Andrew, I've spent the past fortnight watching shows that illustrate theatre's current infatuation with headphones, microphones and recording devices. Until 15 or 20 years ago, sound design was still very much viewed as a technical skill.