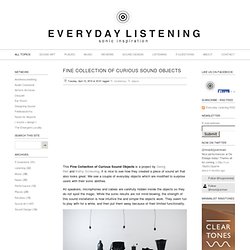 It is nice to see how they created a piece of sound art that also looks great. We see a couple of everyday objects which are modified to surprise users with their sonic abilities. All speakers, microphones and cables are carefully hidden inside the objects so they do not spoil the magic. Kyouei design - products. Paper Note ~ A Tangible Paper Waveform - Andrew Nip, Interaction Designer.

Paper Note ~ A Tangible Paper Waveform The Brief A week long project, the team was asked to conceptualize a project based on generative design - linking machine inputs to variable outputs using a parametric design approach. 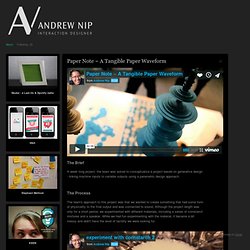 The Process The team's approach to this project was that we wanted to create something that had some form of physicality to the final output and was connected to sound. Gloggomobil - Everyday Listening - Sound Art, Sound Installations, Sonic Inspiration. It has been quite some time since I found this Gloggomobil on Noise For Airports, yet for some reason I did not share it with you yet.

Which is strange, because I love beautiful, handcrafted toys, especially when they make sounds. Children (and their parents!) Can create their own compositions by pushing the black pegs in the holes on the drum. Very simple, yet very nicely constructed. Citymusic - www.akkogoldenbeld.com. Citymusic The tall buildings in the city centre have a heavy touch; the low-rise villas to the South create considerably gentler sounds.

Akko Goldenbeld has a very personal way of looking at, or rather listening to, the city. Soundaroid (prototype) A polaroid camera that captures sound. EAD – weapons of mass distraction. Obsolete Military Designs for Magnifying Sound. A few years ago we posted about these beautiful parabolic structures made of concrete, as a way to magnify sound in the days of World War I. 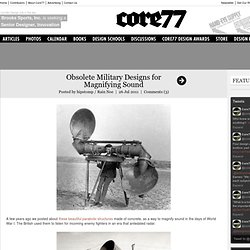 The British used them to listen for incoming enemy fighters in an era that antedated radar. What we didn't realize was that there were smaller, more experimental versions as well. Curious Sound Objects: detergent bottles become theremins. Posted by Lisa Smith | 25 Mar 2010 | Comments (2) This project is beyond awesome: Georg Reil and Kathy Scheuring, both students at the University of Applied Sciences in Würzburg-Schweinfurt, have created A Fine Collection of Curious Sound Objects, where six everyday objects become exceptional, magical instruments with unusual abilities. 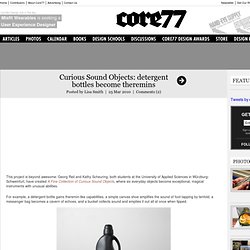 For example, a detergent bottle gains theremin-like capabilities, a simple canvas shoe amplifies the sound of foot-tapping by tenfold, a messenger bag becomes a cavern of echoes, and a bucket collects sound and empties it out all at once when tipped. The project was built with Arduino and Processing, but the technical components are so well concealed that only their uniform blackness and tiny connection ports point to their uniqueness.

According to Reil and Scheuring, each piece pursues the laws laid out by John Maeda in Simplicity: "They are enjoying to use, they are surprising and one wants to explore and investigate them. " Sound Gardening, Transforming Plants into a Multi-Player Musical Instrument. Posted by LinYee Yuan | 29 Aug 2012 | Comments (1) Recently, students from Keio University's Graduate School of Media Design transformed a garden of greenery into a multi-player musical instruments. 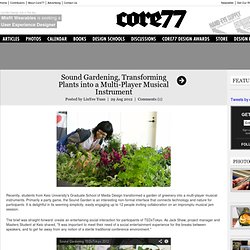 Primarily a party game, the Sound Garden is an interesting non-formal interface that connects technology and nature for participants. It is delightful in its seeming simplicity, easily engaging up to 12 people inviting collaboration on an impromptu musical jam session. The brief was straight-forward: create an entertaining social interaction for participants of TEDxTokyo.

As Jack Shaw, project manager and Masters Student at Keio shared, "It was important to meet their need of a social entertainment experience for the breaks between speakers, and to get far away from any notion of a sterile traditional conference environment. " Using an Adobe Flash demo and a paper mockup with colored circles standing in for living plants, the team built their first 'dirty' prototype. Dwell on Design 2012: The Sounds of A + R. Haven – Harnessing the Sound of Wind {+ instrument} at { sound + design } Haven creates an analog soundscape by harvesting the wind. 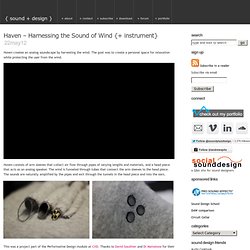 The goal was to create a personal space for relaxation while protecting the user from the wind. Haven consists of arm sleeves that collect air flow through pipes of varying lengths and materials, and a head piece that acts as an analog speaker. The wind is funneled through tubes that connect the arm sleeves to the head piece. Phonofone II by Tristan Zimmermann. Milan 08: American lifestyle brand Charles & Marie presented Phonofone II, a ceramic iPod loudspeaker designed by Tristan Zimmermann, in Milan last month. 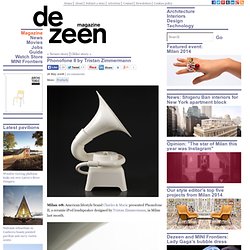 The horn-shaped product amplifies sound from the earphones of a personal music player without the use of electricity. Zimmermann's design has been put into production by Charles & Marie, including a limited edition of 200 in black ceramic (the one shown here is in white ceramic, obviously). Here's some text from Charles & Marie: -- Designed by Canadian designer Tristan Zimmermann, the Phonofone is a ceramic amplification system for your iPod.

The design harkens back to the antique gramophone and phonograph, and works similarly. All ceramic, the Phonofone takes advantage of the material's "rigid and resonant" qualities in its application of producing sound. Tristan's idea is simple: it is about music appreciation. Eidos sensory perception enhancing masks at Royal College of Art. A group of students from the Royal College of Art in London has developed headsets that allow the wearer to adjust their sight and hearing in the same way they'd control the settings on a TV or radio (+ movie). 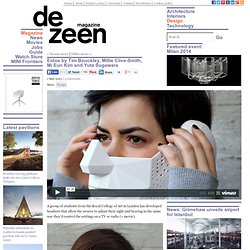 The Eidos equipment was developed to enhance sensory perception by tuning in to specific sounds or images amongst a barrage of sonic and visual information, then applying effects to enhance the important ones. "We've found that while we experience the world as many overlapping signals, we can use technology to first isolate and then amplify the one we want," say the designers. Squeezophone 360 by Claudio Colucci. Milan 09: Designer Claudio Colucci will present a combined speaker and lamp called Squeezophone 360 at Bar Blanco in Milan next week. 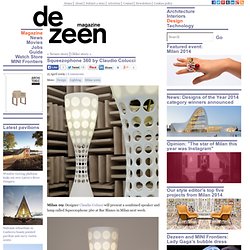 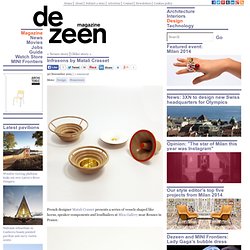 Each is made of sycamore finished in lacquer and gold leaf. A performance by sound artist Damien Marchal will accompany the silent objects of the Infrasons collection, which are on show until 25 February 2012. See all our stories about Matali Crasset here. Here are some more details from Mica Gallery: From 18 November 2011 to 25 February 2012, the Mica Gallery is exhibiting a series of objects by Matali CRASSET which have never been seen before. Bowls, vases, tidies? Natural Speakers by Joon&Jung. Korean designers Joon&Jung have hand-crafted this set of speakers by strapping punctuated ceramic cubes onto a stack of twigs.

The combination of materials gives a slight echo to create a more natural sound. More stories about speakers on Dezeen» The following is from the designer: The Natural Speaker, by Studio Joon&Jung, 2011 New trans-material works with deep understanding with effect. Aesthetics of Domestic Sound by Lise Lefebvre. Lise Lefebvre, who has just completed her Masters at Design Academy Eindhoven, has sent us images of her graduation project. Called The Aesthetics of Domestic Sound, it explores how the experience of using a domestic appliance is affected by the sound it makes. Lefebvre covered vacuum cleaners, whisks, juicers, washing machines and other gadgets in jackets of hand-stitched felt, radically changing the user's experience by muffling the devices both visually and audibly. Object of Sound by NOCC. Paris based design studio NOCC have produced a range of objects whose forms are generated according to the shape of sound waves recorded when their names are pronounced.

The collection, named Object of Sound, includes a candle holder, lampshade, and vase. The profile of the soundwave recorded for each product is rotated into a 3D form, unique to the tone and volume of voice recorded. This form is then made using rapid-manufacturing, meaning that each product could be unique and dictated by the voice of it's owner.