Future - The uneasy truth about human-animal hybrids. While this scientific advance offers the prospect of growing human organs inside animals for use in transplants, it can also leave some people with a queasy feeling. 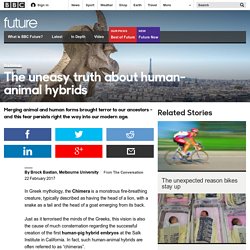 It was precisely this queasiness that led to the moratorium on funding for this programme of research. People, it seems, just can’t stomach the idea of growing human kidneys in pigs. Given the potential advances that this research offers, our objections should probably be based on more than a mild case of nausea. Yet there are a few enduring aspects to the way we perceive human-animal hybrids that makes it difficult to think about them clearly. Against nature? Many of us are like six-year-olds who turn their nose up at the idea of mixing their broccoli with their mashed potato. Real-Life Inception Is Possible and It May Be on Facebook First. Putting thoughts onto the social web straight from the human brain is a fantastic concept, but it might not be too far off. 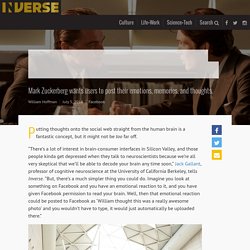 “There’s a lot of interest in brain-consumer interfaces in Silicon Valley, and those people kinda get depressed when they talk to neuroscientists because we’re all very skeptical that we’ll be able to decode your brain any time soon,” Jack Gallant, professor of cognitive neuroscience at the University of California Berkeley, tells Inverse. “But, there’s a much simpler thing you could do.

Imagine you look at something on Facebook and you have an emotional reaction to it, and you have given Facebook permission to read your brain. Science Proves That AC/DC Cures Cancer* Did you know that AC/DC stands for “Apprehend Cancer/Destroy Cancer”? 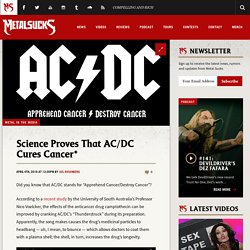 According to a recent study by the University of South Australia’s Professor Nico Voelcker, the effects of the anticancer drug camptothecin can be improved by cranking AC/DC’s “Thunderstruck” during its preparation. Apparently, the song makes causes the drug’s medicinal particles to headbang — uh, I mean, to bounce — which allows doctors to coat them with a plasma shell; the shell, in turn, increases the drug’s longevity. Explains Prof. Voelcker to In-Pharma: “Normally, you only form the coating on one side of the particle, the side that is exposed. Voelcker doesn’t specify why “Thunderstruck” was selected for this purpose, but if I’m understanding what he’s saying correctly, it sounds as though any song that could induce violent vibrations would work. Scientific Debate. An Error Occurred Setting Your User Cookie. This site uses cookies to improve performance. 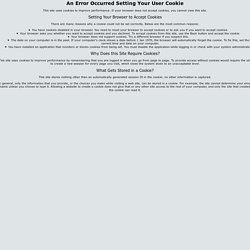 If your browser does not accept cookies, you cannot view this site. Setting Your Browser to Accept Cookies There are many reasons why a cookie could not be set correctly. Below are the most common reasons: You have cookies disabled in your browser. Ig® Nobel Prizes - Silk. 25 Most Hilarious Ig Nobel Prizes Ever Awarded. Online science. Publications. Publications News releases posted after June 23, 2009 can be found in the News section. 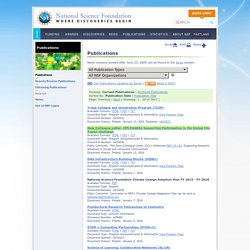 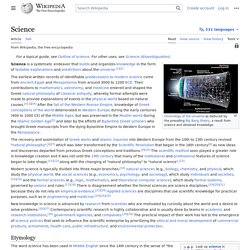 There is disagreement,[19][20][21] however, on whether the formal sciences actually constitute a science as they do not rely on empirical evidence.[22][20] Disciplines that use existing scientific knowledge for practical purposes, such as engineering and medicine, are described as applied sciences.[23][24][25][26] History Early cultures. ResearchGate - Share and discover research. Andrev. Sök. RYMDSLOTTET. Improbable Research. Science. Live Science: Scientific News, Articles and Current Events. Education - Microsoft in Education. 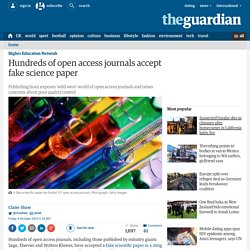 The hoax, which was set up by John Bohannon, a science journalist at Harvard University, saw various versions of a bogus scientific paper being submitted to 304 open access journals worldwide over a period of 10 months. The paper, which described a simple test of whether cancer cells grow more slowly in a test tube when treated with increasing concentrations of a molecule, had "fatal flaws" and used fabricated authors and universities with African affiliated names, Bohannon revealed in Science magazine.

He wrote: "Any reviewer with more than a high-school knowledge of chemistry and the ability to understand a basic data plot should have spotted the paper's shortcomings immediately. Directory of Open Access Journals. SciCentral: Scientific Journals and Publications.