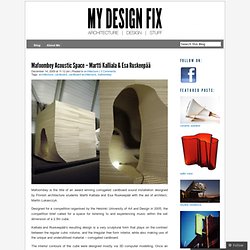 Designed for a competition organised by the Helsinki University of Art and Design in 2005, the competition brief called for a space for listening to and experiencing music within the set dimension of a 2.5m cube. Kalliala and Ruskeepää’s resulting design is a very sculptural form that plays on the contrast between the regular cubic volume, and the irregular free form interior, while also making use of the unique and underutilised material – corrugated cardboard. À propos d'ambiances architecturales et urbaines. The dish before satellites. Posted by hipstomp | 2 Jan 2008 | Comments (3) Here's one that ought to have archaeologists scratching their heads in the future: huge parabolic surfaces rendered in concrete, dotting the English coast, dating back to 1915. 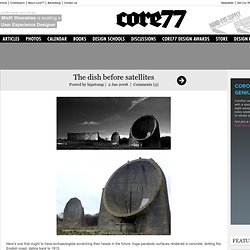 What are they? "Sound mirrors. " In an era before radar, these enormous structures were clever ways to trap soundwaves and hear incoming enemy airplanes before you could see them, and since the craft in question were slow-flying bi-planes, there was still time to do something about it. British adoption of radar technology in the '30s killed construction of future sound mirrors, but the extant structures were probably too big and troublesome to demolish. Via deputy dog. Synaesthetic Filter by Stefan Rutzinger & Kristina Schinegger. Los Angeles architects Stefan Rutzinger and Kristina Schinegger have designed Synaesthetic Filter, a proposed mobile pavilion for experimental music that can change shape to alter acoustic qualities during a performance. 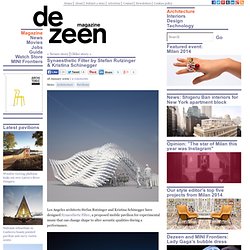 The demountable pavilion can be dismantled for transport and assembled in public interior spaces. Rotating acoustic elements open and close the pavilion and produce changing patterns across the surface. Below is some more information from Stefan Rutzinger and Kristina Schinegger: Synaesthetic filter - a mobile pavilion for experimental music Synaesthetic filter is a mobile instrument for experimental music that can stage performances from scenic plays to sound installations and is supposed to be temporarily assembled in public interior spaces. Chimecco by Mark Nixon. Mark Nixon of London studio CZWG has turned a bridge in Aarhus, Denmark, into a musical instrument by hanging metal pipes from the underside. 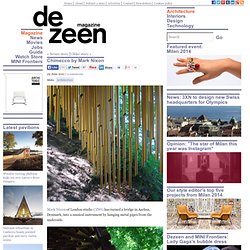 Varying in length, the 600 gold-anodized aluminium pipes move freely in the breeze, sounding like a traditional wind chime when they collide. People on the bridge can touch interactive nodes on its surface to activate the chimes in a controlled order, playing the instrument. Named Chimecco, the sculpture forms part of this year's Sculpture by the Sea exhibition, which takes place entirely outdoors. More projects in Denmark on Dezeen » Here is some more information from Nixon: Chimecco, an interactive instrument Sculpture by the Sea, Aarhus Denmark Mark Nixon’s kinetic sculpture ‘Chimecco’ has been realised as part of the exhibition ‘Sculpture by the Sea’ in Aarhus, Denmark: one of the most popular outdoor sculpture exhibitions in the world - which last year drew crowds of over 500,000 people.

The design is based on three conceptual ideas. The Hear Heres by Studio Weave. The sounds of the countryside are amplified when you place your ear towards one of these four enormous trumpets built by architects Studio Weave (+ slideshow). 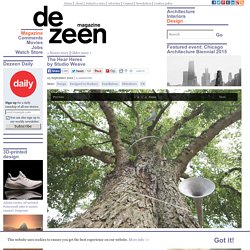 Named The Hear Heres, the horns are dotted along a walk through the grounds of Kedleston Hall, a stately home in Derbyshire, England. One horn is pointed down towards the surface of a lake (above), while another angles up towards the sky (below). The third trumpet winds around the the trunk of a tree, so listeners can hear the movements of the branches (below).

When describing the fourth and largest of the trumpets (below), Studio Weave's Maria Smith told Dezeen how "it's fun for two people to sing to each other from opposite ends. " She explained how the sound is loud on one side, but "sounds distant" from the other. "We thought people would play and experiment with them," she said. Each trumpet is made from fibreglass and coated with zinc, and a set of metal struts holds each one in place. See more installations on Dezeen » EKKO installation by Thilo Frank. Visitors to this installation in northern Denmark by German artist Thilo Frank are invited to walk through a contorted loop of timber while listening to the sounds of their voices and footsteps played back to them (+ slideshow). 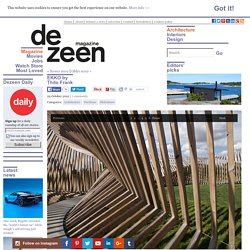 A circle of concrete paving creates a continuous walkway, while 200 wooden frames with incrementally different dimensions provide the twisted structure surrounding it. Microphones are hidden within the wooden beams and record the sounds made by everyone that steps inside. These sounds are continuously remixed by a computer and played back through tiny speakers to create a distorted echo.