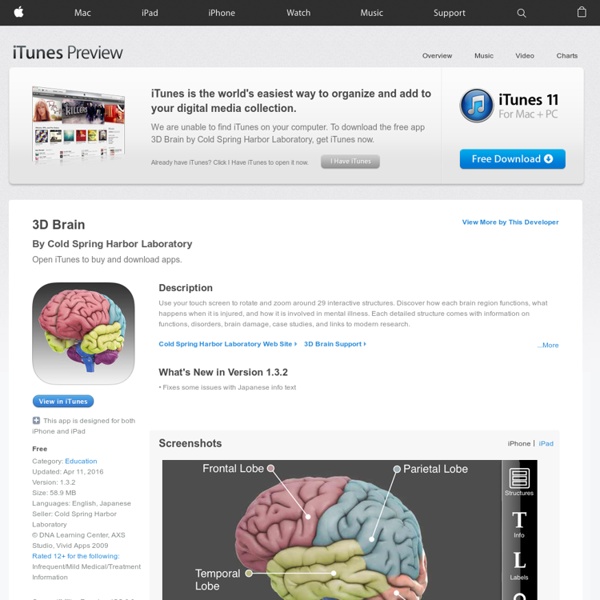 Description Use your touch screen to rotate and zoom around 29 interactive structures. Discover how each brain region functions, what happens when it is injured, and how it is involved in mental illness. Each detailed structure comes with information on functions, disorders, brain damage, case studies, and links to modern research. Created by Vivid Apps and AXS Biomedical Animation Studio for the Cold Spring Harbor Laboratory DNA Learning Center. 3D Brain was produced for the Genes to Cognition (G2C) Online website funded by the Dana Foundation and Hewlett Foundation. ...More

How The Brain Rewires Itself It was a fairly modest experiment, as these things go, with volunteers trooping into the lab at Harvard Medical School to learn and practice a little five-finger piano exercise. Neuroscientist Alvaro Pascual-Leone instructed the members of one group to play as fluidly as they could, trying to keep to the metronome's 60 beats per minute. Every day for five days, the volunteers practiced for two hours. Why dread a bump on the head? The neuroscience of traumatic brain injury This lesson serves as the introduction to the “Why dread a bump on the head?” unit. Students are introduced to traumatic brain injury (TBI) through pictures and discussions that help students break down prior assumptions and begin to think about TBI from a scientific perspective. Students learn about and discuss the three classifications of TBI, mild, moderate, and severe. These categories are presented through the reading and discussion of news articles. Students then examine a hypothetical situation where they are the doctors on a brain injury case.

Google Translate Multilingual neural machine translation service Launched in April 2006 as a statistical machine translation service, it used United Nations and European Parliament documents and transcripts to gather linguistic data. Rather than translating languages directly, it first translates text to English and then pivots to the target language in most of the language combinations it posits in its grid,[5] with a few exceptions including Catalan-Spanish.[6] During a translation, it looks for patterns in millions of documents to help decide on which words to choose and how to arrange them in the target language. Its accuracy, which has been criticized and ridiculed on several occasions,[7] has been measured to vary greatly across languages.[8] In November 2016, Google announced that Google Translate would switch to a neural machine translation engine - Google Neural Machine Translation (GNMT) - which translates "whole sentences at a time, rather than just piece by piece.

Neuroplasticity Contrary to conventional thought as expressed in this diagram, brain functions are not confined to certain fixed locations. Neuroplasticity, also known as brain plasticity, is an umbrella term that encompasses both synaptic plasticity and non-synaptic plasticity—it refers to changes in neural pathways and synapses which are due to changes in behavior, environment and neural processes, as well as changes resulting from bodily injury.[1] Neuroplasticity has replaced the formerly-held position that the brain is a physiologically static organ, and explores how - and in which ways - the brain changes throughout life.[2] Neuroplasticity occurs on a variety of levels, ranging from cellular changes due to learning, to large-scale changes involved in cortical remapping in response to injury.

Lessons The neuroscience lesson resources found here - teacher guides, student guides, handouts, overheads, software, and other supporting materials for classroom activities - are available for your download and use. Each lesson has been aligned with Minnesota Science Standards and we are in the process of aligning the lessons with the Next Generation Science Standards. All materials on this site are available at no cost for educational and non-commercial use. Lessons fall into these groups: Neurogenesis: How To Grow New Brain Cells Adults can still grow new brain cells — neurogenesis — but what are they for? For a long time scientists believed that neurogenesis was impossible: adults had all the brain cells they were ever going to have. Now we know that’s not true.

Nanoparticles and Brain Tumors Guide Activity Home Teacher's Guide Glossary Credit & Thanks Recommended Grade Levels: 10-12+ Tips for using the site with students Brain is not fully mature until 30s and 40s (PhysOrg.com) -- New research from the UK shows the brain continues to develop after childhood and puberty, and is not fully developed until people are well into their 30s and 40s. The findings contradict current theories that the brain matures much earlier. Professor Sarah-Jayne Blakemore, a neuroscientist with the Institute of Cognitive Neuroscience at University College London, said until around a decade ago many scientists had "pretty much assumed that the human brain stopped developing in early childhood," but recent research has found that many regions of the brain continue to develop for a long time afterwards. The prefrontal cortex is the region at the front of the brain just behind the forehead, and is an area of the brain that undergoes the longest period of development.

Deep Brain Stimulation - Teacher's Guide Activity Home Teacher's Guide Glossary Neurogenesis Neurogenesis (birth of neurons) is the process by which neurons are generated from neural stem cells and progenitor cells. Most active during pre-natal development, neurogenesis is responsible for populating the growing brain with neurons. Recently neurogenesis was shown to continue in several small parts of the brain of mammals: the hippocampus and the subventricular zone. Studies have indicated that the hormone testosterone in vertebrates, and the prohormone ecdysone in insects, have an influence on the rate of neurogenesis.[citation needed]

The Science of Fear What are you afraid of? Snakes? Turbulence? Spiders?