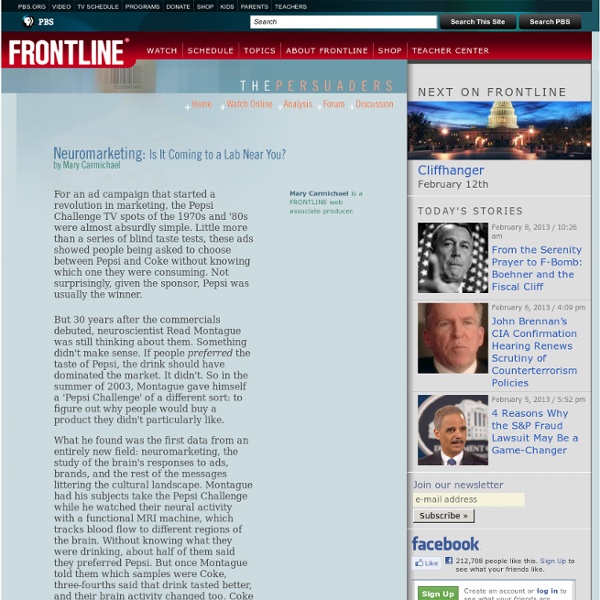 But 30 years after the commercials debuted, neuroscientist Read Montague was still thinking about them. Something didn't make sense. If people preferred the taste of Pepsi, the drink should have dominated the market. It didn't. So in the summer of 2003, Montague gave himself a 'Pepsi Challenge' of a different sort: to figure out why people would buy a product they didn't particularly like. What he found was the first data from an entirely new field: neuromarketing, the study of the brain's responses to ads, brands, and the rest of the messages littering the cultural landscape. Neuromarketing, in one form or another, is now one of the hottest new tools of its trade. Getting an update on research is one thing; for decades, marketers have relied on behavioral studies for guidance. That last piece of research is particularly worrisome to anti-marketing activists, some of whom are already mobilizing against the nascent field of neuromarketing.

Addiction is not a disease: A neuroscientist argues that it’s time to change our minds on the roots of substance abuse The mystery of addiction — what it is, what causes it and how to end it — threads through most of our lives. Experts estimate that one in 10 Americans is dependent on alcohol and other drugs, and if we concede that behaviors like gambling, overeating and playing video games can be addictive in similar ways, it’s likely that everyone has a relative or friend who’s hooked on some form of fun to a destructive degree. But what exactly is wrong with them? For several decades now, it’s been a commonplace to say that addicts have a disease. However, the very same scientists who once seemed to back up that claim have begun tearing it down.

Neuroscience of Free Will Neuroscience of free will is the part of neurophilosophy that studies the interconnections between free will and neuroscience. As it has become possible to study the living brain, researchers have begun to watch decision making processes at work. Findings could carry implications for our sense of agency and for moral responsibility and the role of consciousness in general.[1][2][3] Relevant findings include the pioneering study by Benjamin Libet and its subsequent redesigns; these studies were able to detect activity related to a decision to move, and the activity appears to begin briefly before people become conscious of it.[4] Other studies try to predict activity before overt action occurs.[5] Taken together, these various findings show that at least some actions - like moving a finger - are initiated unconsciously at first, and enter consciousness afterward.[6] A monk meditates. Overview[edit]

Me, Myself and My Stranger: Understanding the Neuroscience of Selfhood Where are you right now? Maybe you are at home, the office or a coffee shop—but such responses provide only a partial answer to the question at hand. Asked another way, what is the location of your "self" as you read this sentence? Is Willpower a Limited Resource Which Can be Cultivated with Exercise? Picture: Robbin Cresswell (PD) “Do what thou wilt shall be the whole of the Law” – Aiwass New developments in biological science suggest your willpower is drawn from a limited supply of chemicals which accumulate in the brain over time. According to Wired willpower is:

Berkeley on Biphasic Sleep If you see a student dozing in the library or a co-worker catching 40 winks in her cubicle, don’t roll your eyes. New research from the University of California, Berkeley, shows that an hour’s nap can dramatically boost and restore your brain power. Indeed, the findings suggest that a biphasic sleep schedule not only refreshes the mind, but can make you smarter. Anger Can Make Us More Rational A recent study in Cognition and Emotion found that anger can sometimes make us more critical thinkers by inhibiting our confirmation bias. Instead of only searching for information that supports our beliefs, anger can create a “moving against” tendency that motivates us to seek alternative information that opposes our assumptions. The study had participants do two different experiments (which they thought were unrelated).

Perceive this: The human brain controls alpha-band oscillation phase to effect temporal predictions Standard models of perception are stimulus-driven, meaning that the external perceptual event drives the brain's perception-related activity. However, the tide may be turning: recent ideas suggest that our perceptual experiences and visually guided behaviors are influenced by top-down processes in the brain – specifically, the brain's predictions about the external world. Recently, scientists at University of Wisconsin–Madison demonstrated that perceptual expectations about when a stimulus will appear are instantiated in the brain by optimally configuring prestimulus alpha-band oscillations in order to optimize the effectiveness of subsequent neural processing. The paper also describes the researchers' investigation of whether the alpha-band phase can be guided by top-down control in a temporal cueing task as a mechanism through which perceptual predictions can optimally configure prestimulus neural activity. The team conducted two experiments to make these determinations.

How to Make a Mind Map® The 'Laws of Mind Mapping' were originally devised by Tony Buzan when he codified the use of imagery, colour and association and coined the phrase 'Mind Mapping'. In the intervening 30 plus years, there have been many variations on the original 'Mind Map ' and the widespread usage of mapping software of various sorts, has dramatically changed what is possible. >> Click here to go to a video that provides a rapid (99 second) overview of how to Mind Map. 10 Practical Uses For Psychological Research in Everyday Life People love to give each other advice. The web is full to bursting with all types of pseudo-psychological advice about life. The problem is, how much of this is based on real scientific evidence? Well, here on PsyBlog we’ve got the scientific evidence.