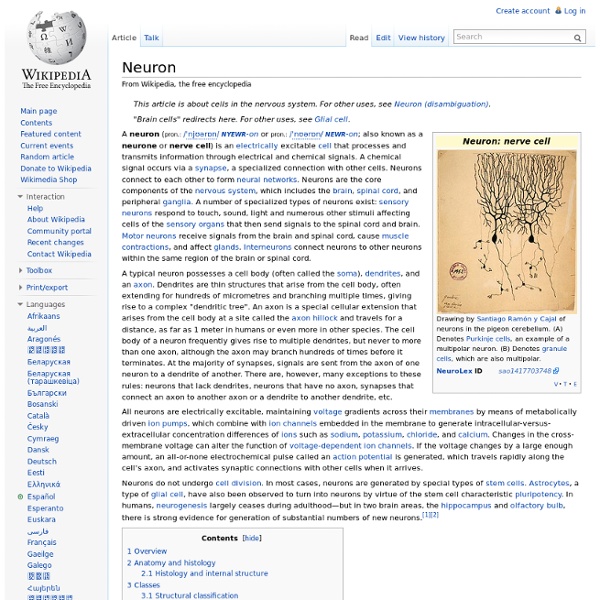 All neurons are electrically excitable, maintaining voltage gradients across their membranes by means of metabolically driven ion pumps, which combine with ion channels embedded in the membrane to generate intracellular-versus-extracellular concentration differences of ions such as sodium, potassium, chloride, and calcium. Changes in the cross-membrane voltage can alter the function of voltage-dependent ion channels. If the voltage changes by a large enough amount, an all-or-none electrochemical pulse called an action potential is generated, which travels rapidly along the cell's axon, and activates synaptic connections with other cells when it arrives. Neurons do not undergo cell division. In most cases, neurons are generated by special types of stem cells. A type of glial cell, called astrocytes (named for being somewhat star-shaped), have also been observed to turn into neurons by virtue of the stem cell characteristic pluripotency. Overview[edit] Anatomy and histology[edit] Related:  Neuroscience

Brain Atlas - Introduction The central nervous system (CNS) consists of the brain and the spinal cord, immersed in the cerebrospinal fluid (CSF). Weighing about 3 pounds (1.4 kilograms), the brain consists of three main structures: the cerebrum, the cerebellum and the brainstem. Cerebrum - divided into two hemispheres (left and right), each consists of four lobes (frontal, parietal, occipital and temporal). – closely packed neuron cell bodies form the grey matter of the brain. Cerebellum – responsible for psychomotor function, the cerebellum co-ordinates sensory input from the inner ear and the muscles to provide accurate control of position and movement. Brainstem – found at the base of the brain, it forms the link between the cerebral cortex, white matter and the spinal cord. Other important areas in the brain include the basal ganglia, thalamus, hypothalamus, ventricles, limbic system, and the reticular activating system. Basal Ganglia Thalamus and Hypothalamus Ventricles Limbic System Reticular Activating System Glia

The Learning Brain Gets Bigger--Then Smaller With age and enough experience, we all become connoisseurs of a sort. After years of hearing a favorite song, you might notice a subtle effect that’s lost on greener ears. Perhaps you’re a keen judge of character after a long stint working in sales. Or maybe you’re one of the supremely practiced few who tastes his money’s worth in a wine. Whatever your hard-learned skill is, your ability to hear, see, feel, or taste with more nuance than a less practiced friend is written in your brain. One classical line of work has tackled these questions by mapping out changes in brain organization following intense and prolonged sensory experience. But don’t adopt that slogan quite yet. If you were to look at the side of someone’s brain, focusing on the thin sliver of auditory cortex, it would seem fairly uniform, with only a few blood vessels to provide some bearing. And yet, some aspects of this theory invited skepticism. So what does change? Still, there’s a big question lurking here.

Meditation found to increase brain size Kris Snibbe/Harvard News Office Sara Lazar (center) talks to research assistant Michael Treadway and technologist Shruthi Chakrapami about the results of experiments showing that meditation can increase brain size. People who meditate grow bigger brains than those who don’t. Researchers at Harvard, Yale, and the Massachusetts Institute of Technology have found the first evidence that meditation can alter the physical structure of our brains. Brain scans they conducted reveal that experienced meditators boasted increased thickness in parts of the brain that deal with attention and processing sensory input. In one area of gray matter, the thickening turns out to be more pronounced in older than in younger people. “Our data suggest that meditation practice can promote cortical plasticity in adults in areas important for cognitive and emotional processing and well-being,” says Sara Lazar, leader of the study and a psychologist at Harvard Medical School. Controlling random thoughts

Imagining the Future Invokes Your Memory I REMEMBER my retirement like it was yesterday. As I recall, I am still working, though not as hard as I did when I was younger. My wife and I still live in the city, where we bicycle a fair amount and stay fit. We have a favorite coffee shop where we read the morning papers and say hello to the other regulars. In reality, I’m not even close to retirement. A new study from the January issue of Psychological Science may explain why we are all so optimistic about what’s to come. Cognitive scientists are very interested in people’s “remembered futures.” Still, very little was known until recently about how these simulations work. These are very difficult questions to study in a laboratory—or at least they were until now. Recalling Tomorrow Szpunar and his colleagues began by collecting a lot of biographical detail from volunteers’ actual memories.

The Brain May Disassemble Itself in Sleep Compared with the hustle and bustle of waking life, sleep looks dull and unworkmanlike. Except for in its dreams, a sleeping brain doesn’t misbehave or find a job. It also doesn’t love, scheme, aspire or really do much we would be proud to take credit for. In a provocative new theory about the purpose of sleep, neuroscientist Giulio Tononi of the University of Wisconsin–Madison has proposed that slumber, to cement what we have learned, must also spur the brain’s undoing. Select an option below: Customer Sign In *You must have purchased this issue or have a qualifying subscription to access this content

Is the Purpose of Sleep to Let Our Brains “Defragment,” Like a Hard Drive? | The Crux Neuroskeptic is a neuroscientist who takes a skeptical look at his own field and beyond at the Neuroskeptic blog. Why do we sleep? We spend a third of our lives doing so, and all known animals with a nervous system either sleep, or show some kind of related behaviour. But scientists still don’t know what the point of it is. There are plenty of theories. Some researchers argue that sleep has no specific function, but rather serves as evolution’s way of keeping us inactive, to save energy and keep us safely tucked away at those times of day when there’s not much point being awake. But others argue that sleep has a restorative function—something about animal biology means that we need sleep to survive. Waking up after a good night’s sleep, you feel restored, and many studies have shown the benefits of sleep for learning, memory, and cognition. This illustration, taken from their paper, shows the basic idea: While we’re awake, your brain is forming memories. So what’s the evidence?

Making Sense of the World, Several Senses at a Time Our five senses–sight, hearing, touch, taste and smell–seem to operate independently, as five distinct modes of perceiving the world. In reality, however, they collaborate closely to enable the mind to better understand its surroundings. We can become aware of this collaboration under special circumstances. In some cases, a sense may covertly influence the one we think is dominant. When visual information clashes with that from sound, sensory crosstalk can cause what we see to alter what we hear. Our senses must also regularly meet and greet in the brain to provide accurate impressions of the world. Seeing What You Hear We can usually differentiate the sights we see and the sounds we hear. Beep Baseball Blind baseball seems almost an oxymoron. Calling What You See Bats and whales, among other animals, emit sounds into their surroundings—not to communicate with other bats and whales—but to “see” what is around them. Do You Have Synesthesia?

The Brain: A Body Fit for a Freaky-Big Brain | Mind & Brain Aiello and Wheeler noted that this dramatic increase in brain size would seem to have required a dramatic increase in metabolism—the same way that adding an air-conditioning system to a house would increase the electricity bill. Yet humans burn the same number of calories, scaled to size, as other primates. Somehow, Aiello and Wheeler argued, our ancestors found a way to balance their energy budget. As they expanded their brains, perhaps they slimmed down other organs. The scientists compared the sizes of organs in humans and other primates. Aiello and Wheeler christened their idea “the expensive tissue hypothesis.” Then William Leonard, a biological anthropologist at Northwestern University, put the expensive tissue hypothesis to a new test. This suggested that the gut-shrinking phenomenon within the primate groups was probably too subtle to explain our increase in brain size completely. Wray and his colleagues compared SLC2A1 in humans and other animals.

The Secrets of Your Brain's Zoom Lens Notice that, even as you fixate on the screen in front of you, you can still shift your attention to different regions in your peripheries. For decades, cognitive scientists have conceptualized attention as akin to a shifting spotlight that “illuminates” regions it shines upon, or as a zoom lens, focusing on things so that we see them in finer detail. These metaphors are commonplace because they capture the intuition that attention illuminates or sharpens things, and thus, enhances our perception of them. Some of the important early studies to directly confirm this intuition were conducted by NYU psychologist Marisa Carrasco and colleagues, who showed that attention enhances the perceived sharpness of attended patterns. In their experiment, participants saw two textured patterns presented side-by-side on a computer screen, and judged which of the two patterns looked sharper. Are you a scientist who specializes in neuroscience, cognitive science, or psychology?

untitled Everyday Stress Can Shut Down the Brain's Chief Command Center The entrance exam to medical school consists of a five-hour fusillade of hundreds of questions that, even with the best preparation, often leaves the test taker discombobulated and anxious. For some would-be physicians, the relentless pressure causes their reasoning abilities to slow and even shut down entirely. The experience—known variously as choking, brain freeze, nerves, jitters, folding, blanking out, the yips or a dozen other descriptive terms—is all too familiar to virtually anyone who has flubbed a speech, bumped up against writer’s block or struggled through a lengthy exam. For decades scientists thought they understood what happens in the brain during testing or a battlefront firefight. Select an option below: Customer Sign In *You must have purchased this issue or have a qualifying subscription to access this content