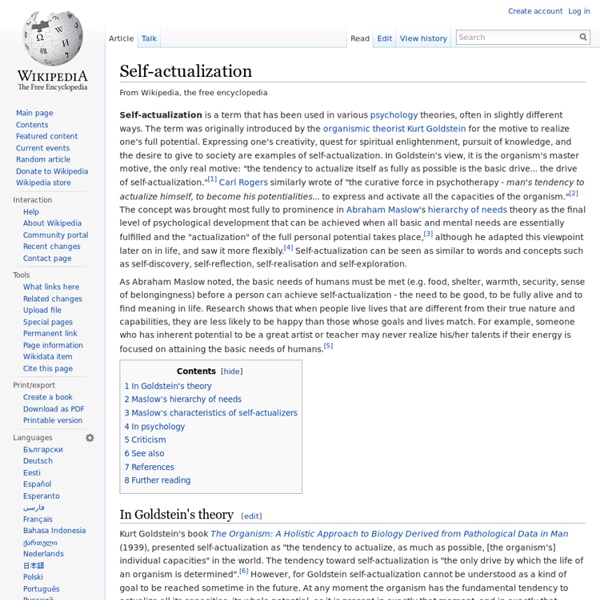 Self-actualization is a term that has been used in various psychology theories, often in slightly different ways. The term was originally introduced by the organismic theorist Kurt Goldstein for the motive to realize one's full potential. Expressing one's creativity, quest for spiritual enlightenment, pursuit of knowledge, and the desire to give to society are examples of self-actualization. In Goldstein's view, it is the organism's master motive, the only real motive: "the tendency to actualize itself as fully as possible is the basic drive... the drive of self-actualization."[1] Carl Rogers similarly wrote of "the curative force in psychotherapy - man's tendency to actualize himself, to become his potentialities... to express and activate all the capacities of the organism In Goldstein's theory[edit] Maslow's hierarchy of needs[edit] Abraham Maslow's book Motivation and Personality started a philosophical revolution out of which grew humanistic psychology. In psychology[edit] Related:  Psychology

Kurt Goldstein Kurt Goldstein (November 6, 1878 – September 19, 1965) was a German neurologist and psychiatrist who created a holistic theory of the organism. Educated in medicine, Goldstein studied under Carl Wernicke and Ludwig Edinger where he focused on neurology and psychiatry.[1] His clinical work inspired the establishment of The Institute for Research into the Consequences of Brain Injuries. As a Jew, Goldstein was forced to leave Germany when Hitler came to power.[2] After being displaced, Goldstein wrote The Organism (1934). Background[edit] Early life[edit] Goldstein was born into an agnostic Jewish family of nine children. Academic career[edit] After a short period working at the business, Goldstein's father acquiesced and allowed him to enroll at Breslau University. In 1926 Fritz Perls became Goldstein's assistant for a year. Professional career[edit] Between 1906 and 1914, Goldstein worked in a psychiatric clinic in Königsberg. Holistic approach[edit] Methodology[edit] Schizophrenia[edit]

Parataxical Integration First used by Irish-American psychoanalytic psychiatrist Harry Stack Sullivan in the 1940s, Parataxical Integration (a combination of terms) refers to the mutual condition of parataxic distortions (another concept of Sullivan’s). Parataxical integration exists when two people, usually intimate with each other (i.e. parents and children, spouses, romantic partners, business associates), are reciprocally reactive to each other’s seductions, judgmental inaccuracies, hostile comments, and manipulations or other "triggering" behaviors. One says or does something causing the other to react, setting off a cyclical "ping-pong", "tit-for-tat", "you-get-me-and-I-get-you-back" oscillation of verbal and/or behavioral reactions. Development[edit] The concept first appeared in Sullivan's The Interpersonal Theory of Psychiatry, published in 1953. Usage[edit] Sources[edit] L.

Virginia Satir Virginia Satir (26 June 1916 – 10 September 1988) was an American author and therapist,[1] known especially for her approach to family therapy and her pioneering work in the field of family reconstruction therapy.[1] She is widely regarded as the "Mother of Family Therapy"[2][3] Her most well-known books are Conjoint Family Therapy, 1964, Peoplemaking, 1972, and The New Peoplemaking, 1988. She is also known for creating the Virginia Satir Change Process Model, a psychological model developed through clinical studies. Change management and organizational gurus of the 1990s and 2000s embrace this model to define how change impacts organizations.[4][5][6][7] Early years[edit] Virginia Satir was born 26 June 1916 in Neillsville, Wisconsin, the eldest of five children born to Oscar Alfred Reinnard Pagenkopf and Minnie Happe Pagenkopf. A curious child, Satir taught herself to read by age three, and by nine had read all of the books in the library of her small one-room school. Innovation

Ernest Becker Ernest Becker (September 27, 1924 – March 6, 1974) was a Jewish-American cultural anthropologist and writer. He is noted for his 1974 Pulitzer Prize-winning book, The Denial of Death. Early life[edit] Becker was born in Springfield, Massachusetts, to Jewish immigrant parents. After completing military service, in which he served in the infantry and helped to liberate a Nazi concentration camp, he attended Syracuse University in New York. Academic career[edit] After graduating from Syracuse University in 1960, Becker began his career as a teaching professor and writer. In 1969, Becker began a professorship at Simon Fraser University in Vancouver, British Columbia, where he would spend the remaining years of his academic life. Becker was an academic outcast in the last decade of his life. Beliefs[edit] Becker eventually came to the position that psychological inquiry can only bring us to a distinct threshold, beyond which belief systems must be invoked to satisfy the human psyche.

Alexithymia Alexithymia /ˌeɪlɛksəˈθaɪmiə/ is a personality construct characterized by the subclinical inability to identify and describe emotions in the self.[1] The core characteristics of alexithymia are marked dysfunction in emotional awareness, social attachment, and interpersonal relating.[2] Furthermore, people with alexithymia have difficulty in distinguishing and appreciating the emotions of others, which is thought to lead to unempathic and ineffective emotional responding.[2] Alexithymia occurs in approximately 10% of the population and can occur with a number of psychiatric conditions.[3] The term alexithymia was coined by psychotherapist Peter Sifneos in 1973.[4][5] The word comes from Greek α (a, "no", the negating alpha privative), λέξις (léxis, "word"), and θυμός (thymos, "emotions", but understood by Sifneos as having the meaning "mood"),[6] literally meaning "no words for mood". Classification[edit] Alexithymia is defined by:[10] Psychologist R. Description[edit] Causes[edit]

Cyclothymia Cyclothymia, also known as cyclothymic disorder, is a mental disorder that involves periods of symptoms of depression and periods of symptoms of hypomania.[3] These symptoms however are not sufficient to be a major depressive episode or a hypomanic episode.[3] Symptoms must last for more than one or two years.[3] The cause is unknown.[2] Risk factors include a family history of bipolar disorder.[3] Cyclothymia differs from bipolar in that major depression, mania, or hypomania have never occurred.[3] Symptoms[edit] People with cyclothymia experience both depressive phases and hypomanic phases (which are more mild than classic manic phases). The distinguishing factor between typical depression and cyclothymic depression is that in cyclothymic depression, there are instances of hypomania. People with cyclothymia can switch from the depressive state to the hypomanic state without warning to them or others. Comorbidities[edit] Causes[edit] The exact cause of cyclothymia is unknown. History[edit]

Conrad Aiken Conrad Potter Aiken (August 5, 1889 – August 17, 1973) was an American writer, whose work includes poetry, short stories, novels, a play, and an autobiography.[1] Biography[edit] Early years[edit] Aiken was the son of wealthy, socially prominent New Englanders, William Ford and Anna (Potter) Aiken, who had moved to Savannah, Georgia, where his father became a respected physician and brain surgeon. Then something happened for which, as Aiken later said, no one could ever find a reason. Aiken's earliest poetry was written partly under the influence of a beloved teacher, the philosopher George Santayana. Adult years[edit] Other influences were Aiken's grandfather, Potter, who had been a church preacher, as well as Whitman's poetry which was 'free' style. Aiken wrote or edited more than 51 books, the first of which was published in 1914, two years after his graduation from Harvard. Personal life[edit] Aiken returned to Savannah for the last 11 years of his life. Awards and recognition[edit]

The Concept of Anxiety All of Kierkegaard's books have either a preface, dedication, or prayer at the beginning. This book includes a lengthy introduction. The Concept of Anxiety was published on exactly the same date as Prefaces, June 17, 1844. For Kierkegaard, anxiety/dread/angst is unfocused fear. Kierkegaard focuses on the first anxiety experienced by man: Adam's choice to eat from God's forbidden tree of knowledge or not. However, Kierkegaard mentions that anxiety is a way for humanity to be saved as well. Progress[edit] In 1793, forty-one years before Kierkegaard wrote The Concept of Anxiety, Immanuel Kant wrote his book Religion Within the Limits of Reason Alone; his book elevated reason in the realm of Christianity.[7] Many continental philosophers wrote their books in relation to Kant's ideas. Søren Kierkegaard 1813–1855 Friedrich Schelling 1775–1854 Repentance is a recollection of guilt. I understand the words of Peter, "To whom shall we go?" Anxiety[edit] "That anxiety makes its appearance is pivotal.