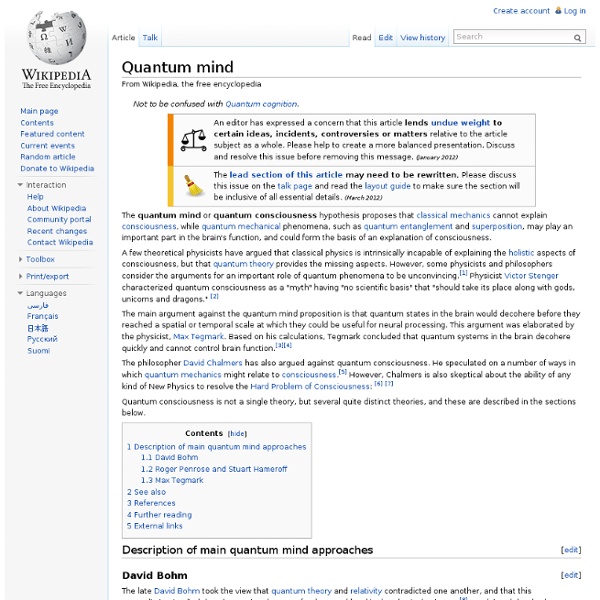 The quantum mind or quantum consciousness hypothesis proposes that classical mechanics cannot explain consciousness, while quantum mechanical phenomena, such as quantum entanglement and superposition, may play an important part in the brain's function, and could form the basis of an explanation of consciousness. It is not one theory, but a collection of distinct ideas described below. A few theoretical physicists have argued that classical physics is intrinsically incapable of explaining the holistic aspects of consciousness, whereas quantum mechanics can. The philosopher David Chalmers has argued against quantum consciousness. Description of main quantum mind approaches[edit] David Bohm[edit] Bohm's proposed implicate order applies both to matter and consciousness, and he suggests that it could explain the relationship between them. In trying to describe the nature of consciousness, Bohm discusses the experience of listening to music. Roger Penrose and Stuart Hameroff[edit] See also[edit]

Scientific evidence for survival of consciousness after death According to Wikipedia.org, "psychometry" is a psychic ability in which the user is able to relate details about the past condition of an object or area, usually by being in close contact with it. The user could allegedly, for example, give police precise details about a murder or other violent crime if they were at the crime scene or were holding the weapon used. About.com's Paranormal Phenomena website lists information about several of the most convincing psychometrists. Stefan Ossowiecki, a Russian-born psychic, is one of the most famous psychometrists. In later experiments, Ossowiecki performed remarkable psychometric feats with archeological objects - a kind of psychic archeology. Ossowiecki described his visions as being like a motion picture that he could watch, pause, rewind and fast-forward - like a videotape or DVD.

Roger Penrose Sir Roger Penrose OM FRS (born 8 August 1931), is an English mathematical physicist, mathematician and philosopher of science. He is the Emeritus Rouse Ball Professor of Mathematics at the Mathematical Institute of the University of Oxford, as well as an Emeritus Fellow of Wadham College. Penrose is known for his work in mathematical physics, in particular for his contributions to general relativity and cosmology. He has received a number of prizes and awards, including the 1988 Wolf Prize for physics, which he shared with Stephen Hawking for their contribution to our understanding of the universe.[1] Early life and academia[edit] As a student in 1954, Penrose was attending a conference in Amsterdam when by chance he came across an exhibition of Escher's work. In 1967, Penrose invented the twistor theory which maps geometric objects in Minkowski space into the 4-dimensional complex space with the metric signature (2,2). A Penrose tiling Later Activity[edit] An earlier universe[edit] Prof.

The Society for the Anthropology of Consciousness | Exploring the origins and future of consciousness 100 Ways To Become More Conscious: How To Raise Your Consciousness 1. Connect with nature – Go for a walk in the forest, jungle, field of daisies, or wherever you feel like getting a connection with nature. It is possible to feel at deep sense of peace and oneness when you attempt to connect with nature. 2. – Exercise and dancing will raise your consciousness by promoting healthy brainwave patterns, healthy neurotransmitter levels, and great circulation throughout your nervous system. 3. - Whether you are an advanced meditator or a beginner, the benefits are tremendous and will allow you to tap into your highest state of conscious functioning if you stick around long enough. 4. - Find only friends that align with who you are, your beliefs, and your values – they will make you more conscious. 5. – If you have the intention to raise your consciousness and state of awareness, you are on the right track. 6. - Anytime you tell the truth, you raise your level of consciousness. 7. - Searching for a purpose will help you find your true purpose here on Earth.

Radioactive decay Alpha decay is one example type of radioactive decay, in which an atomic nucleus emits an alpha particle, and thereby transforms (or 'decays') into an atom with a mass number decreased by 4 and atomic number decreased by 2. Many other types of decays are possible. Radioactive decay, also known as nuclear decay or radioactivity, is the process by which a nucleus of an unstable atom loses energy by emitting particles of ionizing radiation. Radioactive decay is a stochastic (i.e. random) process at the level of single atoms, in that, according to quantum theory, it is impossible to predict when a particular atom will decay.[1] However, the chance that a given atom will decay is constant over time. There are many different types of radioactive decay (see table below). The first decay processes to be discovered were alpha decay, beta decay, and gamma decay. By contrast, there are radioactive decay processes that do not result in transmutation. Discovery and history[edit] Types of decay[edit]

Thoughts on Consciousness | OF MY OWN ACCORD So yesterday, I went to a lecture about consciousness by a neuroscientist called Murray Shanahan, from Imperial College. It was about how consciousness is constructed within the brain, how networks of neurons connect together to create hierarchies of thought and other such clever stuff. To be honest, most of it went right over my head. Total mindfuck. There was, however, an interesting thing about the way in which networks in the brain resemble social networks. This isn’t the best diagram in the world, but it hopefully helps explain how it works a bit. Its interesting to see how, whether by accident or design, we have come to create online networks that so closely resemble the processes that go on within our own brains. In the questions at the end of the lecture, one guy asked that if this system was how consciousness is created, then why is a social network such as Facebook, that relies on a very similar system, not itself a conscious entity? It got me thinking about Twitter though.

The brain’s silent majority - 2009 FALL When you have no clue, call it glue. “Glia,” the Greek word for glue, was the name the pathologist Rudolph Virchow gave, back in 1856, to the gelatinous substance that forms the bulk of the brain. And it stuck. These days, scientists use it to denote the matter that accounts for 90 percent of the brain’s cells and more than half its volume — but, like the late comic Rodney Dangerfield, “can’t get no respect.” Neurons, the “talented tenth” of the human brain that hog the lion’s share of brain scientists’ attention, are indeed a work of evolutionary art. “When the brain is injured, the neighborhood astrocytes go into a completely altered state.” We now know they’re doing much more. Certainly, it’s no stretch to imagine that knowing what glial cells do, and how they do it, could help explain brain disorders and how to cure them. From time to time, Ben Barres brings a brain in to his office. The guardian angels of the synapses Arne Hurty But Barres had a hunch they did more.