Our brains are wired so we can better hear ourselves speak, new study shows 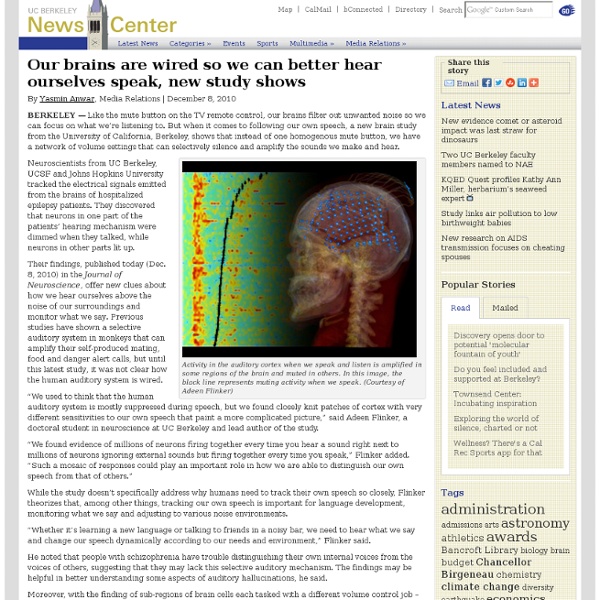 Like the mute button on the TV remote control, our brains filter out unwanted noise so we can focus on what we’re listening to. But when it comes to following our own speech, a new brain study from the University of California, Berkeley, shows that instead of one homogenous mute button, we have a network of volume settings that can selectively silence and amplify the sounds we make and hear. Activity in the auditory cortex when we speak and listen is amplified in some regions of the brain and muted in others. In this image, the black line represents muting activity when we speak. (Courtesy of Adeen Flinker) Neuroscientists from UC Berkeley, UCSF and Johns Hopkins University tracked the electrical signals emitted from the brains of hospitalized epilepsy patients. Their findings, published today (Dec. 8, 2010) in the Journal of Neuroscience, offer new clues about how we hear ourselves above the noise of our surroundings and monitor what we say.

Mini-strokes leave 'hidden' brain damage Each year, approximately 150,000 Canadians have a transient ischemic attack (TIA), sometimes known as a mini-stroke. New research published January 28 in Stroke, the journal of the American Heart Association shows these attacks may not be transient at all. They in fact create lasting damage to the brain. The stroke research team, led by Dr. 100 Ways To Become More Conscious: How To Raise Your Consciousness 1. Connect with nature – Go for a walk in the forest, jungle, field of daisies, or wherever you feel like getting a connection with nature. It is possible to feel at deep sense of peace and oneness when you attempt to connect with nature.

Clearing the Mind: How the Brain Cuts the Clutter Newly discovered neurons in the front of the brain act as the bouncers at the doors of the senses, letting in only the most important of the trillions of signals our bodies receive. Problems with these neurons could be the source of some symptoms of diseases like attention deficit disorder and schizophrenia. "The brain doesn't have enough capacity to process all the information that is coming into your senses," said study researcher Julio Martinez-Trujillo, of McGill University in Montreal. "We found that there are some cells, some neurons in the prefrontal cortex, which have the ability to suppress the information that you aren't interested in. They are like filters." Humans are constantly taking in huge streams of data from each of our senses.

Integral theory Integral theory, a philosophy with origins in the work of Sri Aurobindo and Jean Gebser, and promoted by Ken Wilber, seeks a synthesis of the best of pre-modern, modern, and postmodern reality.[1] It is portrayed as a "theory of everything,"[2] and offers an approach "to draw together an already existing number of separate paradigms into an interrelated network of approaches that are mutually enriching."[1] It has been applied by scholar-practitioners in 35 distinct academic and professional domains as varied as organizational management and art.[1] Methodologies[edit] AQAL, pronounced "ah-qwul," is a widely used framework in Integral Theory.

Cognitive Enhancement Versus Drug War Cognitive enhancement is not about future generations playing video games via neural implants and thought interfaces. Presently, it is about a large fraction of the worlds scientist shortening their lives (speak about lifespan enhancement) via caffeine, nicotine, and sugar intake that leads to diabetes and cardio vascular illnesses via hypertension with high blood pressure and heart troubles, teeth grinding, frequent urination, and so on. Coffee is a must at all conferences. No brew, no chance of surviving afternoon talks in a fully conscious state. The irony should be obvious: In a world with Modafinil and methylphenidate and where the cardio-toxic problems from caffeine are well known, exactly those who should know best, the scientists, are collectively ignorant. Why?

Brainwave entrainment Brainwave Entrainment is any practice that aims to cause brainwave frequencies to fall into step with a periodic stimulus having a frequency corresponding to the intended brain-state (for example, to induce sleep), usually attempted with the use of specialized software. It purportedly depends upon a "frequency following" response on the assumption that the human brain has a tendency to change its dominant EEG frequency towards the frequency of a dominant external stimulus.[citation needed] Such a stimulus is often aural, as in the case of binaural or monaural beats and isochronic tones, or else visual, as with a dreamachine, a combination of the two with a mind machine, or even electromagnetic radiation. Hemispheric Synchronization, a potential and generally desired result of brainwave entrainment, refers to a state when the brainwave pattern of the right and left hemispheres become alike. A person with similar activity in both hemispheres is alleged[by whom?]

The fine dopamine line between creativity and schizophrenia New research shows a possible explanation for the link between mental health and creativity. By studying receptors in the brain, researchers at the Swedish medical university Karolinska Institutet have managed to show that the dopamine system in healthy, highly creative people is similar in some respects to that seen in people with schizophrenia. High creative skills have been shown to be somewhat more common in people who have mental illness in the family. Creativity is also linked to a slightly higher risk of schizophrenia and bipolar disorder. Certain psychological traits, such as the ability to make unusual pr bizarre associations are also shared by schizophrenics and healthy, highly creative people.

Paul Thompson's Research Publications The brain's center of reasoning and problem solving is among the last to mature, a new study graphically reveals. The decade-long magnetic resonance imaging (MRI) study of normal brain development, from ages 4 to 21, by researchers at NIH's National Institute of Mental Health (NIMH) and University of California Los Angeles (UCLA) shows that such "higher-order" brain centers, such as the prefrontal cortex, don't fully develop until young adulthood. A time-lapse 3-D movie that compresses 15 years of human brain maturation, ages 5 to 20, into seconds shows gray matter - the working tissue of the brain's cortex - diminishing in a back-to-front wave, likely reflecting the pruning of unused neuronal connections during the teen years. Cortex areas can be seen maturing at ages in which relevant cognitive and functional developmental milestones occur. The sequence of maturation also roughly parallels the evolution of the mammalian brain, suggest Drs.